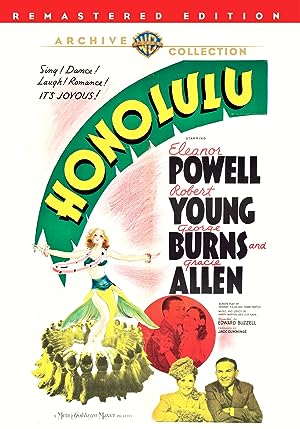 (116)
6.61 h 23 min193913+
Movie heartthrob Brooks is tired of being besieged by adoring fans. When he meets his exact double, a shy Hawaiian plantation owner named George, they decide to switch for a month.

GryphonisleReviewed in the United States on May 28, 2018
3.0 out of 5 stars
Zippy Music In A Typically Labored Plot. Not Terribly Memorable, But Enjoyable.
Verified purchase
A jaunty musical, typical for the era. Also typical is the labored plot line with a bait and switch romance. While it does show the Lurline (and a couple of other ships) it is filmed on a set so liner fans should not expect anything, neither should fans of Old Hawaii---look to the very first Charlie Chan film--which was filmed on location, on Oahu and in the very, very early thirties, at that. As I write this, a couple of months after viewing, I can't really remember much of anything about "Honolulu". Of course, I've seen three new movies in theaters this year (about three times the number of any recent year) and I can generally remember the names of only two of them so don't read too much into that other than most movies are forgettable.

Or I'm not paying attention any more.

I used to really like the Black and Whites, when I was young. Perhaps I watched too many of them, perhaps too closely. Maybe modern TV has gotten THAT good. But I find it difficult to watch most of these older films any more. Other issues keep bubbling up in my head that have nothing to do with what's on the screen. Ah well. If you only have one black and white musical to watch this year I'd make it a Fred and Ginger classic. Or maybe a Carmen Miranda/Alice Fay spectacular like "The Gang's All Here". But that's in Technicolor, isn't it? Oh well, so who cares? "Song of The Islands" is another favorite of mine.

Still, I do remember that I liked Eleanor Powell in this one. And Gracie Allen---although she's a bit wasted here---not well used, as opposed to drunk; her signature talents weren't used well.

Michael MuldawerReviewed in the United States on August 18, 2018
4.0 out of 5 stars
A fun if not particularly important musical-comedy
Verified purchase
First, I'm a big Eleanor Powell and Burns & Allen fan, so it was obvious that I had to see this film. I wasn't turned off by the silly plot, which was no worse than most of the musicals from this era, even the Astaire-Rogers films. My DVD copy wasn't restored-or so it looked to me-and amazingly the picture was somewhat compressed so that the actors sometimes looked like a reflection in a fun house mirror. Imagine Powell with her perfect gams seemingly having chubby legs. This distortion was most evident in her dance numbers which, of course, featured her bare legs. Even with that major flaw, the dance numbers were the biggest attraction for me in the movie, although the comedy by Gracie Allen was outstanding. Strangely, they didn't pair her with George Burns, who had a minimal role in this film. I also liked Eddie "Rochester' Anderson, although his moderated Jim Crow minstrel character would be considered non-PC in 2018. That was hardly offensive next to the Chinese stereotype actor playing Wang, who would push even more buttons in the PC crowd. Unless one is looking to be offended, just sit back and enjoy yourself with these ethnic roles. And the Eleanor Powell tribute to Bill Robinson in blackface was just that: a perfect tribute. Robert Young had the major role in the plot and did a fine job playing light comedy, but I came to this film for the music and dancing. Harry Warren, next to Irving Berlin, has more hits than any other composer, but is an unknown name to most people. Look him up and you'll be shocked by all the wonderful tunes he wrote. In this movie he was paired with an excellent lyricist, Gus Kahn, himself the subject of a Hollywood biopic, "I'll See You In My Dreams." The featured song, titled as the movie, "Honolulu" was my favorite scene in the film, alone just about worth the price of the DVD. You get to see Gracie playing a ukulele and singing the song before she and Eleanor Powell do some routine taps, then followed by Powell's tap dancing-rope skipping dance. The song is delightful and my wife worked it out complete with the lyrics and uke chords on her site: banjojudy.com. The Marx Brothers number and the Hula-tap dance are also fun. Yes, Powell has been in better pictures, but for any of her fans, this is a must see. If you want to really appreciate Burns & Allen, get a copy of "Damsel in Distress." but this movie also shows off Gracie's enormous talent.
4 people found this helpful

Elvin OrtizReviewed in the United States on March 19, 2016
5.0 out of 5 stars
A Great Comedy from the Thirties
Verified purchase
This is a great comedy. It isn't a musical, though. And although I purchased it to watch Eleanor Powell tapdance, I get to enjoy this whole comedy, silly as it may seem. Robert Young plays a famous actor and a pineapple farmer from Hawaii who often gets confused with the actor, and Eleanor Powell is a famous tapdancer who falls in love with the actor. When both characters decide to switch places, the comedy begins. Maybe I'm old-fashioned, but I just get a kick out of watching this over and over and still laughing at it. This is the kind of film that shows that simplicity works. While Robert Young makes me laugh with this tale of "trading places," Powell delights me with a Hula tapdance, a black-face routine honoring Bill Robinson, a famous black tapdancer at that time, and a tapdance routine where she skips rope at the same time. I found this a fun movie to watch.
5 people found this helpful

HoundGalReviewed in the United States on June 28, 2021
4.0 out of 5 stars
Eleanor Powell and Gracie Allen make this worthwhile.
Verified purchase
It's a product of its time and there's a bit of racism in it -- think "Japanese houseboy." The reasons to see it anyway: Eleanor Powell was an incredible dancer, and it's one of the times you can see Gracie Allen working largely without husband George Burns (he is in it, but not as much), which is interesting. Speaking of interesting, Willie Fun, who plays the houseboy, was an advocate for bettering the conditions of movie actors, and ran his own restaurant in East Hollywood.

Quincy, M.E.Reviewed in the United States on January 2, 2019
4.0 out of 5 stars
An Enjoyable Trifle
Verified purchase
A minor MGM musical, something of a "B" programmer, from the golden age of Hollywood, starring Robert Young, Eleanor Powell, George Burns and Gracie Allen. Silly mistaken-identity plot features Young in dual roles, but the best parts feature, unsurprisingly, Eleanor Powell's peerless tap dancing, including a charming duet with Gracie Allen, who reveals some amiable musical talent. This was her last film performance teamed with George Burns. Worth a look.
2 people found this helpful

CalicokidReviewed in the United States on November 21, 2012
4.0 out of 5 stars
FOR THE DIE HARD POWELL FANS
Verified purchase
This entry is from the tail end of the magnificent Eleanor Powell's reign as the premiere tap dancer of the silver screen. Unfortunately, there isn't a lot of dancing in evidence here and what there is has lost some of the brilliant sparkle of her previous films, mainly the fault of the choreography. It's still way ahead of anybody else who was around at the time. Everybody in the film works very hard to put over the mistaken identity ruse at the center of the plot and you want it to take fine ... but, well, it really looks like they're working hard, perhaps a little too hard. The DVD allows you to skip to the dancing numbers and maybe the Burns and Allen routines. In this case that's a big plus and I never thought I would say that. Any one of the Powell 'Broadway Melody' films and, particularly, 'Born To Dance' would be a better way to see her to better advantage.
2 people found this helpful

steve_manassasReviewed in the United States on February 17, 2013
4.0 out of 5 stars
Silly plot, but Eleanor Powell steals the show again
Verified purchase
While the plot of this 1939 movie is rather silly - it features Robert Young in a dual role as movie star Brooks Mason and pineapple enterpreneur George Smith - the true star of the film is the great Eleanor Powell, who does several Hawaiian-themed dance numbers, as well as a blackface tribute to her idol, Bill "Bojangles" Robinson. George Burns plays Mason's (or is it Smith's?) manager in the film, and Gracie Allen plays Powell's dimwitted girlfriend (Gracie and Eleanor even dance together briefly), though Burns and Allen appear separately for most of the picture and only appear together near the end of the movie. Also in the film: Eddie "Rochester" Anderson, of Jack Benny fame, plays Brook Mason's butler, Washington.

Despite its flaws, if you're an Eleanor Powell fan, this movie is a must-have.
3 people found this helpful

Paula HarmonReviewed in the United States on November 24, 2020
5.0 out of 5 stars
Adorable Ellie, adorable Gracie
Verified purchase
Honolulu is a fun movie. Worth it simply for Eleanor Powell's dancing. Ellie & Gracie "dancing" together is just an added treat. And Eleanor Powell's hula & hula tap is quite simply AMAZING!!!!
See all reviews
Back to top
Get to Know Us
Make Money with Us
Amazon Payment Products
Let Us Help You
EnglishChoose a language for shopping. United StatesChoose a country/region for shopping.
© 1996-2021, Amazon.com, Inc. or its affiliates