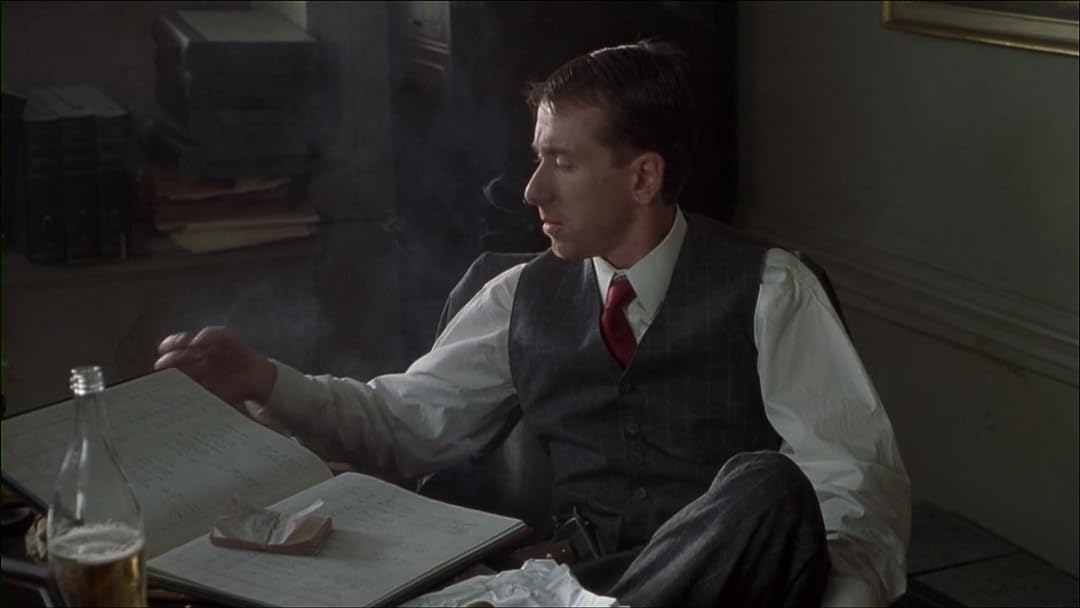 (1,200)
6.32 h 10 min2021X-Ray18+
Laurence Fishburne stars as a man recently released from jail who returns to his criminal ways as a linchpin in the African-American run numbers racket, despite those around him trying to get him back on the straight and narrow.

Laser PointReviewed in the United States on March 4, 2018
5.0 out of 5 stars
GREAT CAST FINE FILM
Verified purchase
This movie purports to be the story of Bumpy Johnson, a Harlem gangster, who faced down the mob in a dispute for control of the Harlem numbers racket. Some of the "facts" in the movie are in dispute especially its portrayal of DA Thomas Dewey as a crook in league with the mob. Dewey has always been known as a scrupulously honest man so this aspect of the movie attracted a lot of criticism as well as a law suit. That being said, the performances in the movie are terrific, particularly those of the supporting players. The stars of the film Lawrence, Fishburne, Vanessa Williams, Andy Garcia, and Tim Roth are very good but the revelation is the performances from ancillary cast members such as Chi McBride and Paul Benjamin as two of Bumpy's henchmen and Mike Star and Richard Bradford as evil doers for the mob. The entire cast is just wonderful including those with very limited screen time. If you enjoy gangster movies you will very likely enjoy this movie and may well be moved ( as I was) to read more about the events and characters depicted in the film.
12 people found this helpful

joel wingReviewed in the United States on February 17, 2021
3.0 out of 5 stars
Draw is black gangsters standing up to white ones otherwise story is rather routine
Verified purchase
Hoodlum takes place in Harlem in 1934 where Dutch Schultz (Tim Roth) is trying to take over the numbers game from the Queen (Cicely Tyson). Bumpy Johnson (Laurence Fishburne) is her main lieutenant. The movie was directed by Bill Duke to highlight the black gangsters that stood up to the white mob.

Of course seeing black people fighting white gangsters is the main draw of the film. In terms of a mob story however that’s the only difference. Otherwise there’s plotting, gun play, lots of dead bodies and deals and betrayals. You want to see whether the Queen and Bumpy can prevail but how they go about it is rather routine.

Jack ZubritskyReviewed in the United States on June 6, 2016
5.0 out of 5 stars
The Black Counterpart to the Vintage Immigrant Gangsters of the 1930's
Verified purchase
Hoodlum is an excellent period piece on Bumpy Johnson, the black counter part to the famous immigrant gangsters of the thirties. As a addendum, remember that Clarence Williams III who is in this movie played Bumpy in the beginning of the film American Gangster with Denzel Washington. A cultured man who resigned himself to the the role that he played in Harlem, where jobs were few and most lives were victimized by the people who lived outside of city. Fishburne's understated portrayal of Johnson is a wonderful diversion to his usual scenery chewing roles.
One of the things that the film reminds is the social strata in the 1930's where racial stereotypes and fear of immigration meant, as always, that police and criminals were equally against them at every turn. However, this is an action film at its core, not a civil liberties tome and as a crime thriller it is excellent. One of Lawrence Fishburne's first turn as the star is an excellent backdrop for his skills as an actor, with Tim Roth in an riveting supporting role as Dutch Schultz. The very accomplished hand of director and consummate character actor, Bill Duke needs to be noted as well.
11 people found this helpful

By CJs PirateReviewed in the United States on May 15, 2016
5.0 out of 5 stars
The Kind of Movie Spike Lee Would Want
Verified purchase
Hoodlum is the kind of movie that I'd be willing to bet even Spike Lee could come up with (except there's too many white people in it). Loaded with a Who's Who of Hollywood's best, Lawrence Fishburne stars as Ellsworth "Bumpy" Johnson, the numbers running king of Harlem.

Keep in mind, this is neither a biography nor historically accurate movie. This film mixes and matches actual characters from a variety of locales and times to make this an interesting movie. Dutch Schultz (Tim Roth), Lucky Luciano (Andy Garcia), "The Queen," Stephanie St. Clair (Cicely Tyson) as well as Queen Latifah in a supporting role make up this star and historical character studded cast.

This is a very well made movie. The character study is deep, the acting first rate. This is a movie worth watching a few times.

NostalgicMomReviewed in the United States on January 29, 2019
1.0 out of 5 stars
DVD Mistake
Verified purchase
While the dvd itself looks absolutely authentic the content is NOT. The dvd plays the first few minutes of the 50's movie 'the hoodlum' and then shuts itself off. Nothing else after that. Every fast forward to a later spot on the dvd returns to the beginning of mentioned black and white movie. Not sure I want to bother to go to the post office to send it back since the trouble would be more than the warehouse price. Still teed off though.

Andy EmparanReviewed in the United States on July 26, 2016
5.0 out of 5 stars
A Gangster Movie Worth Getting !
Verified purchase
I saw this movie in the theater when it came out. I enjoy the plot, even though it is fictional. The premise is what gangster movies are made of.

Again, a fictional story, yet it well written and tells a good story. I recommend this movie, and say What ya reading this, get the movie !
5 people found this helpful

TechsavvyReviewed in the United States on May 24, 2016
4.0 out of 5 stars
Long before Goodfellas there was Bumpy Johnson
Verified purchase
Well done creative adaption of the life of Bumpy Johnson. Vanessa Williams is stunning, Queen Latifah is well cast (and attractive), Tim Roth as Dutch Shultz is exceptional, Andy Garcia mimcs Lucky Luciano, including his physical defects perfectly. It's the story of an aging Harlem rackets boss played by Cicly Tyson and the ultimate takeover, expansion and cooperation with the Italian controlled NYC mob, led by Bumpy Johnson. Well done and well worth the time to watch.
4 people found this helpful
See all reviews
Back to top
Get to Know Us
Make Money with Us
Amazon Payment Products
Let Us Help You
EnglishChoose a language for shopping. United StatesChoose a country/region for shopping.
© 1996-2022, Amazon.com, Inc. or its affiliates