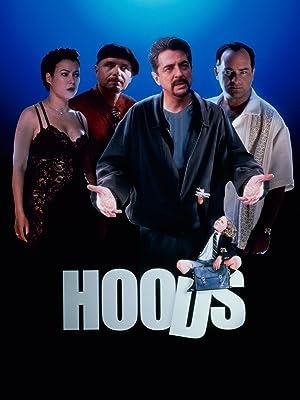 (7)
5.01 h 30 min1998R
A middle-aged mobster teams up with five would-be gangsters to take out the son of a rival mob boss, only to discover their target is a nine-year-old boy.

Amanda OReviewed in the United States on June 4, 2019
5.0 out of 5 stars
Great
Verified purchase
Great

SandraReviewed in the United States on January 16, 2013
3.0 out of 5 stars
Hoods
Verified purchase
Joe mantegna was great. Movie was okay. Hoods title.I' d watch again to see joe mantegna. Iike all his movies.
One person found this helpful

LGwriterReviewed in the United States on September 3, 2006
2.0 out of 5 stars
Not as strong as it should have been...
Starts off great--mob comedy kinda thing with some good sharp lines and strong acting from Vincent Berry, Kevin Pollak, Seymour Cassel, Richard Foronjy, and Joe Mantegna, not to mention Jennifer Tilly. We get to the halfway point and it's still relatively good.

Then things start to unravel. Cassel, who plays a mob boss and Mantegna's father, orders his son to hit a specific person who belongs to the family of a rival mob, after an opening scene in which a teenager is killed in an explosion. The teenager is a relative of Cassel's. We know we're in serious trouble when Mantegna and his crew can't find a suitable hit man and squabble about it. They finally "hit" on Joe Pantoliano, who plays Charlie Flynn, a nutjob confined to a loony bin, who also happens to be married to Jennifer Tilly, Mantegna's former lover.

After that, the comedy element just about disappears completely and we have a film that has truly lost its sense of direction. The person to be hit by Mantegna turns out to be a big surprise and then when one of the characters, later, is tragically killed, the film has, it's obvious, given up trying to be coherent and is seen shrugging its shoulders--"Why me? I'm just a movie. Do I have to make sense so that you the viewer can enjoy me? NO. I DON'T. So don't try to make me."

Groan. For a much better film written and directed by the same filmmaker, Mark Malone, see Bulletproof Heart with Anthony LaPaglia and Mimi Rogers. Unfortunately, it's not on DVD. But it's a strong piece of work. The only reason I gave Hoods two stars is because Mantegna, Tilly, and Pollak all turn in strong performances, even though the material is weaker than Grade Z shampoo.

J. WeaverReviewed in the United States on October 3, 2004
3.0 out of 5 stars
Mediocre, but it has its moments
This is not the best movie ever made in this genre, but it has a sort of pathetic realism which makes it worth seeing. It is not a true comedy, though some of the scenes are humorous, such as when Meg Tilly seeks to seduce Mantegna after getting married to another man, breaking up their affair which was held during Mantegnas' own marriage. It's Angellos' (Mantegna) 50th birthday and things are not going well. His father has ordered him to hit a rival mob members relative, but nobody knows exactly who it is they are supposed to "whack". Faced with the dilemma of killing a noncombatant and the problem of finding a person to accomplish the task with only 5 hours to get the job done, things slide downhill rapidly.

Pollack turns in a fine performance, as does most of the cast. The pacing drags at times, and the flashbacks to Angelos' childhood sometimes distract the viewer. The main problem with the movie is that it's not funny enough to be a comedy, and not deep enough to be a drama. The movie would have been better if it was more over the top as a comedy, or explored the relationship with the father more as a drama. While it raises some interesting ethical questions, loyalty, revenge, ect., it never seems to get around to exploring their meanings. However there is enough here to make the movie worth viewing at home, with breaks to run to the kitchen during some of the slower parts. A good movie for those times when nothing new has come out on video you want to see.
3 people found this helpful

Mian SukimanReviewed in the United States on March 4, 2001
1.0 out of 5 stars
Boring !!!
Despite the stars in this movie, it is a very boring affair. Hoods is about a wise guy played by Joe Mantegna who is assigned by his father to kill somebody by the name of "Carmine Delaroza" who turns out to be a 9 year olds kid. Despite being sold as a comedy, this movie is not funny. The DVD is in full screen. No closed captioning (despite there is a CC on the back of the jacket). No Dolby 5.1 either. The picture quality is OK. Avoid this. Not worth it.
One person found this helpful
See all reviews
Back to top
Get to Know Us
Make Money with Us
Amazon Payment Products
Let Us Help You
EnglishChoose a language for shopping. United StatesChoose a country/region for shopping.
© 1996-2021, Amazon.com, Inc. or its affiliates