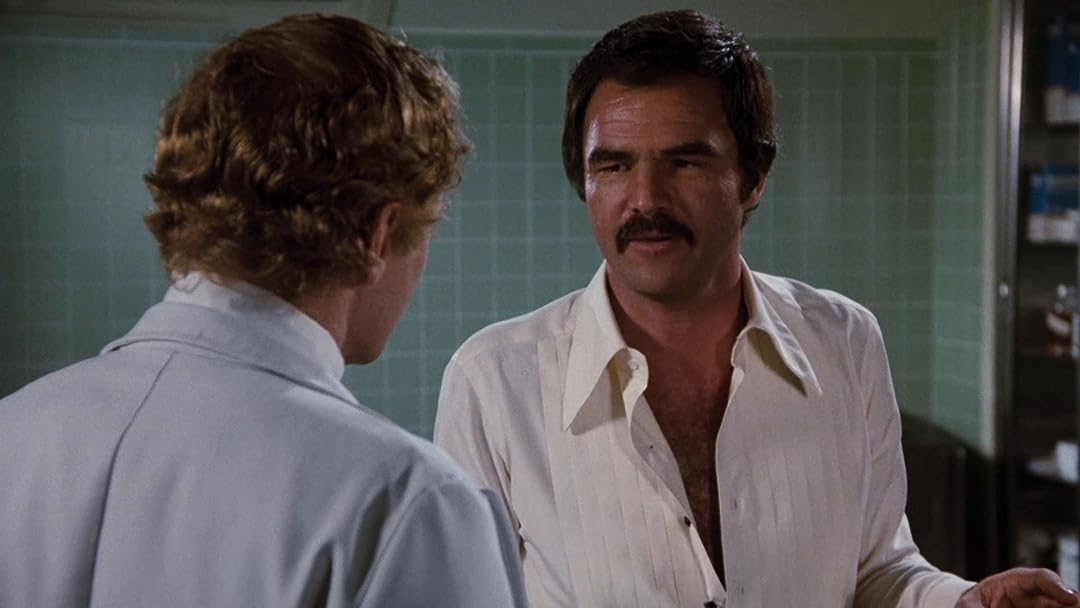 (1,651)
6.41 h 39 min1978PG
When it comes to life-threatening exploits, they don't get any better than those of professional stuntman Sonny Hooper - until now.

rbmusicman/and/movie-fan'Reviewed in the United States on October 17, 2015
4.0 out of 5 stars
'ONE LAST STUNT' ???
Verified purchase
Ace but ageing stuntman 'Sonny Hooper' (Burt Reynolds) will perform almost any stunt asked of him to get the
'shot' the film-makers require, however, years of high-risk stunts has taken it's toll on 'Sonny'...the Doctors have
made it quite clear that if he continues he will almost certainly end up paralysed, there is only so much repair-work
that can be done on his battered body.
Stunt-work is a competitive market there is always someone willing to take the risk if you don't, the new generation
are younger and fitter, such a young admirer of 'Sonny's' work down the years turns up on the scene, 'Ski' (Jan-Michael
Vincent) wanting to work with the Stunt-Legend.
Trouble is, the presence of 'Ski' will encourage 'Sonny' to take more risks feeling he has a point to prove.......
When an opportunity arises for 'Sonny' with 'Ski' to earn a shed-load of money to make a near-impossible car-jump the
ageing stuntman will risk all hoping to survive and maybe make this his last stunt ??
The film also Stars 'Sally Field' as 'Hooper's' partner - 'Gwen'....'Brian Keith' as 'Jacko' also a legendary stuntman and father
of 'Gwen'....along with 'Robert Klein' as 'Roger Deal' the film director that demands increasingly dangerous stunts for his
films regardless of it's cost.
This is a fun-film experience which includes several impressive stunt-sequences telling the tale of the rivalry in what is a
often dangerous occupation................well worth a revisit.

Futuristic WorkshopReviewed in the United States on August 19, 2021
5.0 out of 5 stars
I’m just grateful God gave me eyes and ears to watch this classic
Verified purchase
My dad raised me on this movie. I have a personalized original movie poster for it signed by Burt to my wife and I. Needless to say, it gets 5 stars from me. The guy dancing like a goofball at the begin of the Palamino Club scene should be in 3 out of every 10 movies made. So much to love about this movie.
2 people found this helpful

Amazon CustomerReviewed in the United States on October 1, 2020
1.0 out of 5 stars
Hooper, Burt Reynolds Movie
Verified purchase
This is the second BVD that I have purchased from Amazon that fails to play in any device - not a Samsung DVD player, Pioneer Kuro Elite BVD player, or Sony Vaio laptop. I have purchased a BVD copy of Disney’s “Song of the South” that has film extras and the quality is awesome for a third of the price of the Amazon copy. The Amazon copy is a thin disc and bendy where most DVD/BVD are rigid.
One person found this helpful

MDRReviewed in the United States on March 4, 2020
5.0 out of 5 stars
FUNNY MOVIE !
Verified purchase
The HOOPER DVD MOVIE, is a really good and funny movie starring Burt Reynolds. It's about a stunt man, and all the stunt jobs he does. Very worth watching, also stars Jan Michael Vincent, and Sally Fields. We actually seen this at the theatre, and decided to buy and have our own copy for this price !

G.Reviewed in the United States on March 2, 2021
1.0 out of 5 stars
No Sound
Verified purchase
I purchased this DVD brand new and received it promptly. However, upon trying to play it there was no audio. I tried different settings on my DVD player, stereo and TV. All to no avail. The video and closed captioning work fine. All other discs I have tried work fine and have sound. I requested to return this disc and have it exchanged with the identical item. The replacement is identical alright. It has no sound either. I noticed on the DVD case that it says "It is licensed not for sale outside Australia and New Zealand." It wont play on my laptop computer at all. I will look into buying one of the used DVD's listed for sale by other sellers.

FordAngliaReviewed in the United States on April 5, 2016
4.0 out of 5 stars
Hooper - FINALLY in Widescreen :)
Verified purchase
For years, this film was only available in a cropped version, nice to finally see it in widescreen & blu-ray. One of Burt Reynolds' better comedy outings, the story (about Hollywood stunt people and filmmaking) is fun and the apocalyptic earthquake stunt sequence at the end is a highlight :)
12 people found this helpful

IrishgoombaReviewed in the United States on February 18, 2017
5.0 out of 5 stars
Classic
Verified purchase
Classic movie now on blu ray. It is as good as the 1st time I saw it in 78 as young kid. The transfer is good i know alot of people complain about old movies transfer to HD but im sure it is hard to get it crystal clear on a movie that was transfered from film that has been deteriorating for for almost 40 years. If your a fan of Reynolds you will love this movie. Also give Sharky Machine on blu ray a shot another 80s Reynolds classic and good movie.
4 people found this helpful

R. W. W.Reviewed in the United States on October 23, 2021
5.0 out of 5 stars
Underrated Burt Reynolds film
Verified purchase
This is always been one of my favorite Burt Reynolds movies. i’m finally glad that it has become available for purchase, because I looked for years, and there was absolutely no other way I could stream it.
See all reviews
Back to top
Get to Know Us
Make Money with Us
Amazon Payment Products
Let Us Help You
EnglishChoose a language for shopping. United StatesChoose a country/region for shopping.
© 1996-2021, Amazon.com, Inc. or its affiliates