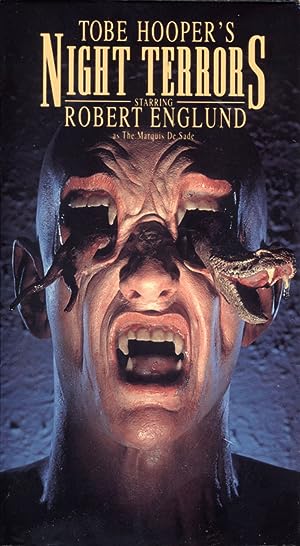 (23)3.41 h 37 min199318+
A young woman finds herself forced into becoming an unwilling disciple of a descendant of the Marquis de Sade.

Rock HoundReviewed in the United States on September 9, 2017
5.0 out of 5 starsA Unique Thriller with Terrific Camerawork
Verified purchase
Englund does the best he can with a role that emphasizes megalomania rather than sadism, and because one of his characters is de Sade, the megalomania is a drawback. Movie still gets an A- because of its most interesting aspect: How seduction can lead to suffering and accompanying "enjoyment." Very daring camerawork of the man and girl each riding horseback--I'll let you guess which person rides the black stallion, and which rides the white mare of innocence in this night-mare. Sometimes a low-budget movie must offer extremes of plot because, realistically, it can afford to do little else. Yet, much is done and done well in this offbeat thriller. I sincerely doubt that its director, Tobe Hooper, really had much todo with e.g. POLTERGEIST, which is a bore and a half. NIGHT TERRORS does what a movie is supposed to do: The plot & character-development M*O*V*E fast. Movie is highly recommended for thriller-fans seeking a film that is very different.
3 people found this helpful
Report abuse

J. WestReviewed in the United States on September 12, 2020
1.0 out of 5 starsOne Of Tobe Hooper's Worst Horror Film Ever!
Verified purchase
Me and my fiance tried to watch this but we got terribly bored. This isn't one my favorite Tobe Hooper horror film. Waste of "Renting A Movie" money.
One person found this helpful
Report abuse

P skiReviewed in the United States on April 10, 2018
3.0 out of 5 starsSomehow it all holds together...
Verified purchase
RE is the main reason for that. Should've had (more) backstory on Mqs. de Sade. Otherwise, it's decent horror fare. Enjoy!
One person found this helpful
Report abuse

anthonyReviewed in the United States on May 2, 2021
1.0 out of 5 starsHorrible
Verified purchase
I wish I could get my money back it was so horrible
Report abuse

Kindle CustomerReviewed in the United States on November 17, 2016
4.0 out of 5 starsFor Tobe Hooper fans
Verified purchase
Hooper one of, if not THE, best stylist the genre has ever known. This is not one of his masterpieces, but is more multi-layered and artfully crafted than most directors could boast. Wrongly ignored because of low-budget and snobbery -- but then even those among Hooper's best (Salem's Lot, Lifeforce) are neglected.
2 people found this helpful
Report abuse

Kindle CustomerReviewed in the United States on March 29, 2016
5.0 out of 5 starsI love this movie
Verified purchase
I love this movie. It has a dark and sensual feel to it that I only find once in a while.
2 people found this helpful
Report abuse

L GontzesReviewed in the United States on April 30, 2006
3.0 out of 5 starsZoe Trilling is all the money!
Tobe Hooper's Night Terrors is a low budget horror film with a few pinches of nudity (the scenes with "Genie" played by Zoe Trilling and "Sabina" played by Alona Kimhi are particularly good!).

In short, the dialogues are very poor, the plot and the setting are pretty good, and the special effects are average, while the acting is below average with William Finley's performance being pathetic. Moreover, Robert Englund does a much better job as Marquis De Sade than as Paul Chevalier. In addition, it was interesting, though not that surprising, to see Zachi Noy from the Lemon Popsicle series, since the film was shot in Israel.

The movie could have been more graphic, but it seems that the director was holding back for some reason.

Nevertheless, what with the horror and the sexy scenes, and as far as B-movies are concerned, the film is decent.

Overall, far from being a masterpiece, it just might provide for an evening's entertainment if in a really silly mood and/or intoxicated.


8 people found this helpful
Report abuse
See all reviews
Back to top
Get to Know Us
Make Money with Us
Amazon Payment Products
Let Us Help You
EnglishChoose a language for shopping. United StatesChoose a country/region for shopping.
© 1996-2021, Amazon.com, Inc. or its affiliates