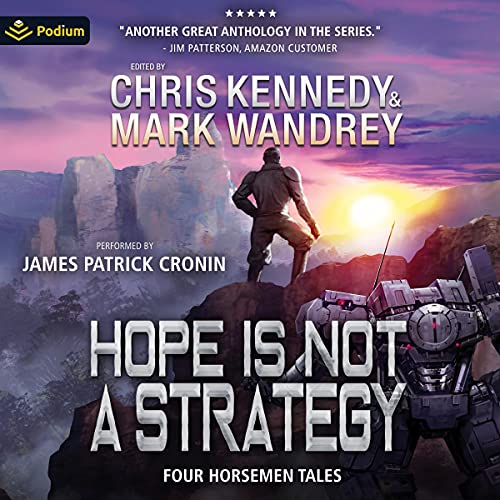 Hope Is Not a Strategy: Four Horsemen Tales, Book 8

List Price: $21.35
You Save: $2.67 (13%)
By completing your purchase, you agree to Audible’s Conditions Of Use
Sold and delivered by Audible, an Amazon company
Share

4.5 out of 5 stars
4.5 out of 5
74 global ratings
How are ratings calculated?
To calculate the overall star rating and percentage breakdown by star, we don’t use a simple average. Instead, our system considers things like how recent a review is and if the reviewer bought the item on Amazon. It also analyzes reviews to verify trustworthiness.
Top reviews

Doug Triplett
5.0 out of 5 stars An action packed collection of stories worth their weight in red diamonds!
Reviewed in the United States on March 1, 2019
Verified Purchase
This is another tremendous collection of short stories in the Fiur Horseman universe. They are all great and you meet a diverse cast of characters. I can see many of these characters showing up again. Be sure and get this collection and cash your golden ticket!
Read more
12 people found this helpful
Helpful
Report abuse

Chris H.
4.0 out of 5 stars Another excellent Anthology
Reviewed in the United States on March 3, 2019
Verified Purchase
One of the things I love the most about the 4 Horsemen Universe, and the writers who participate is the way they manage to spin this giant narrative together. Even though you can hear their individual voices, they blend perfectly in a way that keeps the universe vibrant, different, yet comfortably familiar.
With good editing, superb world building, and excellent attention to detail these authors have banded together to create something that has become a fixture in my household.
Read more
5 people found this helpful
Helpful
Report abuse

Kindle Customer
5.0 out of 5 stars Great Selection of Stories
Reviewed in the United States on January 10, 2020
Verified Purchase
Excellent collection of short stories, some that touch the mind, some the heart. The stories from the aliens perspective, struggling to understand humans and vice versa. For an old warrior the story of striving to complete the mission really hit home.
Read more
One person found this helpful
Helpful
Report abuse

Christopher W
5.0 out of 5 stars Hope might not be a strategy, but it definitely has value.
Reviewed in the United States on July 14, 2019
Verified Purchase
I continue to be amazed at the quality of these anthologies in the 4HU. I shouldn't be too surprised given the authors chosen to write these stories, but considering how many anthologies there have been... it's quite the accomplishment. I tip my hat to all involved as they continue to fill in and expand this rich, diverse, and growing universe.
Read more
Helpful
Report abuse

Jim Patterson
5.0 out of 5 stars Another great anthology in the series.
Reviewed in the United States on April 5, 2019
Verified Purchase
Generally not a fan of short fiction, however; these were some really nice vignettes. Hours well spent reading them. Thanks again, folks for letting me visit 4HU.
Read more
2 people found this helpful
Helpful
Report abuse

G. Jacobs
5.0 out of 5 stars Love shorts!
Reviewed in the United States on March 14, 2019
Verified Purchase
Great author line up! New points of view to an already great series of books. Some tie in stories, some new.
Read more
2 people found this helpful
Helpful
Report abuse

Scott Osmond
4.0 out of 5 stars Expands The 4HU
Reviewed in Australia on March 7, 2019
Verified Purchase
Several things I like about these collections. Firstly they are good tales of adventure, exploration and survival. Secondly I can examine the wares of authors I've not read before. Finally we get a wider look at the 4HU. Shorts from previous collections also can become full length novels. Something that snagged my attention in this one is the Roswell crash. If the US military had examples of gal tech from the 1950s and a galactic it's surprising that the alpha contracts went so badly. The intel about various merc races would have been useful. MW was the author who is a co-creator which means this could turn out to have big consequences in later main sequence novels. Such reveals have happened in previous collections. I'll be signing up for the fun.
Read more
Report abuse
See all reviews
Back to top
Get to Know Us
Make Money with Us
Amazon Payment Products
Let Us Help You
EnglishChoose a language for shopping. United StatesChoose a country/region for shopping.
© 1996-2021, Amazon.com, Inc. or its affiliates