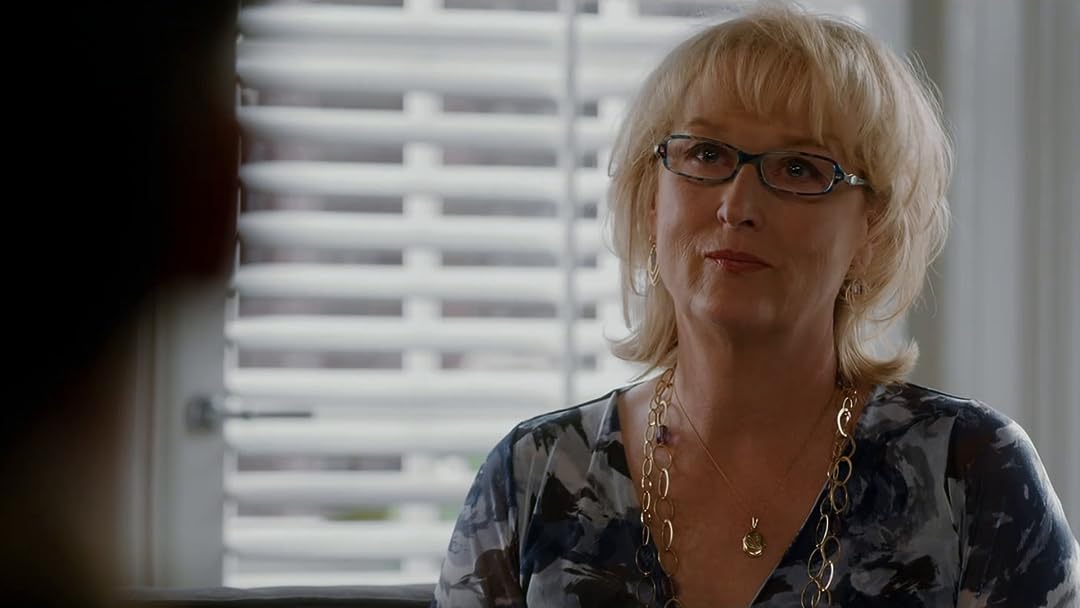 (3,105)
6.31 h 39 min2012X-RayPG-13
After decades of marriage, a devoted couple (Meryl Streep and Tommy Lee Jones) tries couple's counseling in order to spice things up and reconnect.

Butterflymom54Reviewed in the United States on September 5, 2020
3.0 out of 5 stars
A challenging dilemma
Verified purchase
I tried to be open minded and give this movie a chance. I think both Tommy and Meryl gave a good performance and kudos to both for acting in a very uncomfortable movie. This issue is private and marriage is sacred. These issues can happen in any relationship. I have been married for almost 30 years so some things were straight on. However what I saw was a disrespectful, manipulative husband who is insensitive and resentful of his wife and a wife who needs some counseling and another focus instead of putting all of her hopes on her husband. That is a huge burden. She needs to look for joy and fun with other people and herself. I had to stop watching as I do not enjoy looking into people's private sex life. Exploring issues and seeing them share live would be okay but It was just too uncomfortable for me to continue. Besides that there are a lot of expletives people can use to express their frustration but I do not respect people using G. D. Or Jesus as one. That shows a lack of self-respect and I can do without that. I can not recommend the movie as an uplifting, inspirational or educational positive download to the brain. Maybe some people could laugh and enjoy this but the subject matter is a bit painful for me. I do think the movie ended well. Maybe a marriage like that can be saved and revived. I feel there is more to a good marriage than sex. Intimacy can be expressed by laughing together, shared goals, parenthood, and just respecting each others needs and differences. :)
9 people found this helpful

MeemeReviewed in the United States on May 14, 2021
5.0 out of 5 stars
Interesting and Enjoyable
Verified purchase
Tommy Lee Jones, Meryl Streep, and Steve Carell (in a delightfully different role) make up the main characters in this movie. It's entertaining to watch and extremely well acted by all three.

Streep is frustrated by her disinterested, slightly jerky, husband Tommy Lee Jones, who, after 30 years has settled into about the most boring routine of married life. They haven't shared a bed for many years; sex is non-existent; she has nothing interesting to say to him---and he's not interested even if she does. His job is boring; at home he buries himself in the newspaper and watching golf on TV. He prefers to eat alone and never touches his wife or speaks more than two words, and then goes to bed. Repeat, day after day, after day.

Streep in frustration sets up an intense week long marriage counseling vacation in Maine. Steve Carell is the therapist. It's painfully awkward to watch this couple grapple with their issues, but it doesn't drag the viewer down. All of these people are SO good and believable in their roles, capturing every little mannerism and nuance of their characters, it's as though you're hiding around the corner watching and listening in on their meeting. It's a quiet film, which won't appeal to the adrenaline junkies, but it is a fascinating character study of a long-time married couple who have long ago lost the spark that drew them together.

It is the story of how a once thriving marriage loses its way through the years without realizing it. It's not overly serious, but serious nonetheless.It has a few endearing moments, but not ever sappy. It doesn't take sides, though at first it seems like all the problems are his. By the end we realize it takes two to make a happy marriage and most (not all) it takes two to ultimately destroy it. The ending is as it should be. Interesting to see Steve Carrell in a role that wasn't laugh-out-loud funny.

Oceans3Reviewed in the United States on February 23, 2018
5.0 out of 5 stars
Such a fantastic movie. 2 of my favorite actors
Verified purchase
Such a fantastic movie. 2 of my favorite actors.
It is so fitting for couples who have been together for several years or more.
It really brings home what is important in life and how making assumptions about how your partner feels/thinks, can turn your life upside down. Needlessly!!
Talking about things, even a little bit, can prevent years of misunderstanding and even worse, heartache. Heartache that is brought on by one assuming something totally incorrect. Heartache that gets worse and worse because of what one person has decided in their mind. Not based on any facts what so ever.
The tiniest amount of communication can make a life time of difference.
How much of our lives are wasted because of worry and fear of the unknown.
It's not just a chick flick. MY husband, a cop, retired navy ,( Navy Seal)oved it too.
Go for it. You will like!
7 people found this helpful

AishaReviewed in the United States on February 24, 2020
3.0 out of 5 stars
Blushing
Verified purchase
I don't know. It made me just the slight bit uncomfortable, but then that's what was supposed to happen right? That Meryl and Tommy did such a good job as the Middle age empty nesters with "intimacy" issues that I felt it! I have to be honest, I have this image of Tommy as a military man, cowboy, and seeing him so vulnerable in this was strange, yet, watching him in the love scene with Meryl was a bit touching, seeing how badly they wanted to make things right, failing, and trying again. A very tender movie, strange music choices though.........
3 people found this helpful

JustMyOpinionReviewed in the United States on June 27, 2016
5.0 out of 5 stars
A gem
Verified purchase
I think many people will miss how profound this movie really is. It is the exception, I believe, to most marriages that have become routine. Would that every one of those could end up this way. If you don't have an appreciation for the depth of intimacy marriage requires, and the courage to change, I don't think you will realize how this ordinary little story is really a great one.
16 people found this helpful

N. C. BernardReviewed in the United States on January 24, 2017
5.0 out of 5 stars
Another Streep Success
Verified purchase
Perhaps not as well known as Streep's other movies but it is certainly worth watching (and buying). She and Tommy Lee Jones (as her husband) worked well together. They are veteran actors who made us sit up and take notice despite little mention in the press. You have to work at marriage as you remember that "love" is a verb. Kudos to this couple for making hard work look so easy.
3 people found this helpful

LuReviewed in the United States on March 11, 2018
3.0 out of 5 stars
All the hallmarks of an excellent movie...
Verified purchase
The acting was excellent, the dialog was excellent and if you would enjoy watching a movie that showcases a lack of intimacy between two people who have been married for thirty years, then it was an excellent plot. That all being said, this movie needed either more comedic relief or a more compelling reason for the couple to have grown so far apart for me to enjoy it.
5 people found this helpful

Movies R UsReviewed in the United States on October 14, 2020
5.0 out of 5 stars
MORE THAN A CHICK FLICK
Verified purchase
TOUCHING AND INSIGHTFUL. I WOULD RECOMMEND THIS MOVIE TO COUPLES OF ALL AGES TO WATCH & LEARN.

I USUALLY RESERVE 5 STARS FOR "BIGGER" MOVIES THAT WERE AT LEAST NOMINATED FOR AWARDS, NOT NECESSARILY BLOCKBUSTERS OR CLASSICS. I MADE AN EXCEPTION WITH THIS MOVIE BECAUSE IT IS SO WELL DONE, DOWN TO EARTH AND AUTHENTIC.

STEVE C. SHOWED A RANGE OF ACTING SKILL I DID NOT KNOW HE HAD. MERYL & TOMMY WERE SCREEN MAGIC AS A DYSFUNCTIONAL COUPLE GOING ON A JOURNEY OF DISCOVERY.
See all reviews
Back to top
Get to Know Us
Make Money with Us
Amazon Payment Products
Let Us Help You
EnglishChoose a language for shopping. United StatesChoose a country/region for shopping.
© 1996-2022, Amazon.com, Inc. or its affiliates