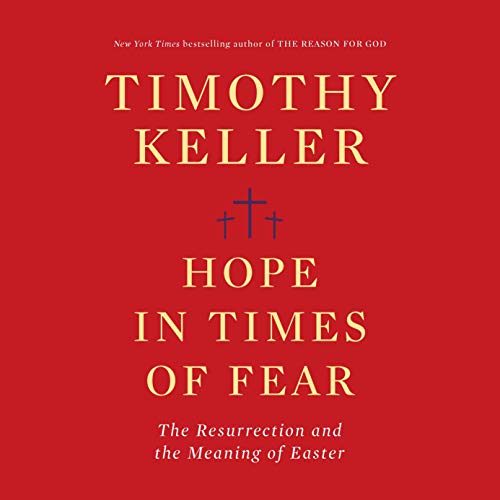 Hope in Times of Fear: The Resurrection and the Meaning of Easter

The Resurrection accounts of Jesus in the Gospels are the most dramatic and impactful stories ever told. One similarity unites each testimony - that none of his most loyal and steadfast followers could "see" it was him, back from the dead. The reason for this is at the very foundation of the Christian faith.

She turned around and saw Jesus standing there, but she did not realize that it was Jesus. (John 20:14)

Hope in the Time of Fear is a book that unlocks the meaning of Jesus's resurrection for listeners. Easter is considered the most solemn and important holiday for Christians. It is a time of spiritual rebirth and a time of celebrating the physical rebirth of Jesus after three days in the tomb. For his devoted followers, nothing could prepare them for the moment they met the resurrected Jesus. Each failed to recognize him. All of them physically saw him and yet did not spiritually truly see him. It was only when Jesus reached out and invited them to see who he truly was that their eyes were open. Here the central message of the Christian faith is revealed in a way only Timothy Keller could do it - filled with unshakable belief, piercing insight, and a profound new way to look at a story you think you know. After listening to this audiobook, the true meaning of Easter will no longer be unseen.

Amazon Customer
5.0 out of 5 stars Life-Changing Book
Reviewed in the United States on April 16, 2021
Keller’s newest book is an essential read for followers of Christ who want to understand His resurrection biblically and heartfully.
Images in this review

T&KD
5.0 out of 5 stars Solid. Reasonable Faith
Reviewed in the United States 🇺🇸 on December 17, 2022
Verified Purchase
Tim Keller is no stranger to heartbreak and pain - he wrote this book while suffering with pancreatic cancer. He has a solid understanding of God's word as well as history. We read this book in our Sunday
School class during which time my husband was dealing with stage 4 cancer.

J. Marturano
5.0 out of 5 stars The book is GREAT, it arrived on the first day of the range and was in perfect condition!
Reviewed in the United States 🇺🇸 on July 25, 2022
Verified Purchase
I am a couple chapters in! This is a great book on fear of all types and how Christ’s resurrection should and does make a difference in our daily lives! I was surprised at the great condition of the (used) book! Thank you Tim Keller and thank you seller!
Read more
One person found this helpful
Helpful
Report abuse

Sallyrose
5.0 out of 5 stars These are the best
Reviewed in the United States 🇺🇸 on September 8, 2022
Verified Purchase
I LOVE that the ink is erasable. I wish I had bought a bigger package
Read more
One person found this helpful
Helpful
Report abuse

Amazon Customer
5.0 out of 5 stars Unshakeable Hope
Reviewed in the United States 🇺🇸 on November 14, 2021
Verified Purchase
I have read many Tim Keller books and listened to countless sermons, but I think this book may be his masterpiece. It describes the essence of the Christian faith, found in the Great Reversal, the life, death and resurrection of Jesus. Time shows how this pattern of decent before ascent, of death before life is the pattern for our lives as believers and indeed for the history of the world. Tim shows clearly how the hopelessness of postmodernism and the false hope of human progress through social engineering or technology pale in comparison to the hope found in the resurrection of Jesus Christ and the Great Reversal of human history that it portends.
Read more
4 people found this helpful
Helpful
Report abuse

Jim G.
5.0 out of 5 stars Life giving hope
Reviewed in the United States 🇺🇸 on July 4, 2021
Verified Purchase
In more than 80 years I have lived in a place of simple hope; hope that was borne out of a loving family, a small community, a simple church that was always there even when I wasn’t, people that I knew I could trust most of the time, and a country led by many (not all) good, well meaning leaders. Sadly, it seems to me that much, if not most of that time, has passed. However, into this personal void strides Tim Keller who so clearly lays out our deepest hope with such eloquence and conviction that he burns through the darkness of the secular world, which offers nothing but emptiness, and then lifts us again to offer the very real hope and encouragement so badly needed by our neighbors. Our stories change; God’s never does.
Read more
2 people found this helpful
Helpful
Report abuse

Becky Wells
5.0 out of 5 stars Not Just Blowing Sunshine
Reviewed in the United States 🇺🇸 on July 26, 2021
Verified Purchase
Timothy Keller presents a timeless perspective on hope in this beautifully written look at the source of our hope, the actual, literal, bodily resurrection of Jesus Christ from the dead. In presenting the reality of this factual miracle, Keller shows how our hope is not just in some future happy place in the sweet by-and-by, but it's real power, victory and joy in the nasty now-and-now. (Thank you, Rev. Elmer H. Murdoch.) The truth though, is that it is through loss, suffering, sorrow, humility and giving all that we experience this hope, this "Great Reversal". There's no "name it and claim it". There's no prosperity gospel. There's no promise of worldly success or even happiness. There is however the hope of the Kingdom of God. (Spoiler: It's already here.)
Read more
One person found this helpful
Helpful
Report abuse

The Warden Family
VINE VOICE
5.0 out of 5 stars Keller is always worth reading
Reviewed in the United States 🇺🇸 on March 11, 2021
Verified Purchase
This is a book that is both a theology of the resurrection (emphasis on resurrection and not the cross) but also for our cultural moment in COVID, racial disharmony etc. Keller also mentions his own cancer diagnosis.

Keller lays out the evidence for the cross, but in an end note Keller lays out his thesis, which is basically to explain how inaugurated eschatology (he doesn't use those words) is good news for us, and he at times specifically applies it to our modern world.

There's also a bit of biblical theology here, tracing, I would say various themes more than just one.

I would say this book seems aimed at new-ish believers, to some extent non-believers, and believers who might want to dip for the first time into biblical theology and inaugurated eschatology.
Read more
46 people found this helpful
Helpful
Report abuse

Amazon Customer
5.0 out of 5 stars For the searching soul
Reviewed in the United States 🇺🇸 on April 14, 2022
Verified Purchase
The world needs a little hope. Keller reminds us a whole lot of hope because of Christ’s Resurrection. The serious journeyer should not miss this one.
Read more
One person found this helpful
Helpful
Report abuse
See all reviews

S E COLVILLE
5.0 out of 5 stars Excellent book
Reviewed in the United Kingdom 🇬🇧 on May 16, 2022
Verified Purchase
I used this book for my own personal growth in my belief in Jesus ‘s resurrection and my own
Read more
Report abuse

Galadriel
5.0 out of 5 stars Excellent
Reviewed in the United Kingdom 🇬🇧 on May 21, 2021
Verified Purchase
Excellent
Read more
One person found this helpful
Report abuse

Eric Draht
5.0 out of 5 stars Pretty decent
Reviewed in Canada 🇨🇦 on May 20, 2021
Verified Purchase
Great read for someone just starting out in Christian theology. He doesn’t go in depth like his other books, but it’s a broad stroke of what the Christian life means.
Read more
Report abuse
See all reviews