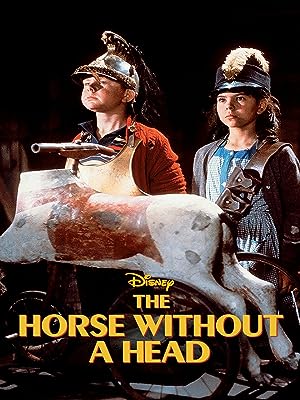 The Horse Without A Head

Colleen GrotkeReviewed in the United States on February 17, 2016
5.0 out of 5 stars
A wonderful trip down memory lane and a must see Disney movie.
Verified purchase
I saw this way back when (1963) as a six year old. At the time I thought it was the best movie I ever saw. It was shown on two consecutive Sunday nights in two parts. After it was shown I was in front of the TV every Sunday for about two years hoping Mr. Disney would show it again. But, alas, it never was repeated. As a typical kid, I forgot the name of the movie after awhile. All I could remember was some of the exciting and funny parts. I began looking around a few years back to try to find it again, but having forgotten the name, I had no luck. I even asked a Disney historian, but from what I could remember of the movie, she was unable to make a connection. Finally, I was on vacation and mentioned my searching and the guy I was speaking too said "Oh, that's The Horse Without a Head". After I got over the shock, it started coming back to me. My next step was to rent the movie and just enjoy it. Now that that great question has been resolved for me, I have to move on to What is the Meaning of Life and Why are We Here..
7 people found this helpful

microjoeReviewed in the United States on September 7, 2005
5.0 out of 5 stars
A little gem...
Verified purchase
THE STORY: When a famous French mail train is robbed in a rural area, the thieves stash their loot inside an abandoned factory in a poor village, planning to return when the heat dies down. They hide the key inside a wooden horse that the local kids play with. The local children stumble on the key and the cash, and fight to keep the crooks from it. The movie has comedy, drama, and suspense and is quite a little gem.

BEHIND THE SCENES: All of the actors selected for this project were new to the Disney Studio except the young girl, played very well by Pamela Franklin, who appeared again in a Disney theatrical feature 3 years later, "A Tiger Walks". The actors and plot are very good, and the costumes and set are very authentic due to high quality art direction by Michael Stringer. While the film is supposed to be set in France, almost all of the shooting production was actually completed in England at the Pinewood Studios. The outdoor set of the French village was built entirely from scratch on the studio backlot and was one of the largest movie sets the British film industry had ever seen at over a million square feet in size. It took 8 weeks to construct, and used 50 tons of concrete. It is completely convincing on camera, and you would never know it is all a studio set. The village was kept intact by Pinewood Studio and Disney producers used the set again 3 years later, after doing an incredible job of redressing it to become a Scottish village for the film, "The Three Lives of Thomasina".

"Horse Without a Head" was originally released theatrically overseas in 1961, but never in the US. This is curious because the production values and quality of the film are much higher than many other projects that Disney distributed to theatres at the time. Two years later it finally aired on the Disney television show, "Wonderful World of Disney", for the first time in two parts beginning on 9/29/63. It re-aired in '64, and '67. It was later serialized on The New Mickey Mouse Club. I recommend you track down this little gem, we enjoyed it immensely.

carlafReviewed in the United States on August 17, 2014
5.0 out of 5 stars
One of Disney's little known gems
Verified purchase
One of my favorite films as a child, "The Horse Without a Head", tells the story of five children, their hobby horse without a head and a 10 million franc train robbery. The action moves quickly. The actors are first rate. They include well-known names such as Jean-Pierre Aumont, Herbert Lom and Leo McKern of "Rumpole of the Bailey" fame.

Most of the action takes place in a small, French town near Paris. When robbers steal money from a train traveling from Dijon to Paris, they drop the money from the train when the train slows down near the tracks of the small town.

Lots of fun and lots of dogs, who were all trained by Marion (Pamela Franklin), one of the children.
2 people found this helpful

K. R. NortonReviewed in the United States on April 3, 2013
5.0 out of 5 stars
The Horse Without a Head
Verified purchase
This is a fun movie. I watched it as a child on Disney's "Wonderful World of Color" and enjoyed it, but then it was unavailable for a long time. It's an adventure movie, set in a small village in France, with brave, funny and indomitable children as the heroes and some ludicrous, bumbling villains who get their come-uppance through the children and the Horse Without a Head. By the way, the "horse" is an old rocking horse mounted on a wheeled carriage that the children ride down the steep streets of their village. Both children and adults will enjoy this movie.

WTReviewed in the United States on November 13, 2013
5.0 out of 5 stars
Boyhood Memories
Verified purchase
This story reminds me of my childhood in British Hong Kong in the 1950s and 60s. I enjoy this movie a lot, as it brings me back to the good old days of my boyhood. Boys liked to form small gangs to do "adventurous" things together those days, days without many toys. Like the kids in this movie, I used to get together with friends at some open ground in our village after supper to talk about things and plan "adventure trips". So called "adventure trips" were just going to some places a little far from home and bringing back forsaken things you found as "treasures". The movie,I think,is very well made, interesting, fun, and staying dramatic all the time, reflecting a time when the whole world was peaceful and calm, before technology and materialism had invaded so much in the human hearts. I first saw this movie in 1964 in Hong Kong. We used to have the American "Walt Disney's Comic" in bilingual (English-Chinese)version and monolingual (Chinese)version in British Hong Kong during the 1960s. In fact, I read the comic before I saw the movie, and since then the movie stays in my heart for good. That is why I still searched to buy this DVD after almost half a century.
One person found this helpful

Lana FrazierReviewed in the United States on April 14, 2015
5.0 out of 5 stars
Great movie for the whole family!
Verified purchase
Cute movie, the five children are a great team and the dogs cute too. The horse without a head may be unusually named, but a fine family movie.
3 people found this helpful

Indianapolis shopperReviewed in the United States on September 12, 2020
5.0 out of 5 stars
Would buy from this seller again
Verified purchase
Good quality

good mamaReviewed in the United States on April 21, 2015
4.0 out of 5 stars
Pretty Good Movie
Verified purchase
This was a good family movie that gave us the opportunity to talk about being wary of strangers. It was entertaining, but we were able to talk about the importance of making wise decisions and keeping your parents informed about things going on in the neighborhood.
See all reviews
Back to top
Get to Know Us
Make Money with Us
Amazon Payment Products
Let Us Help You
EnglishChoose a language for shopping. United StatesChoose a country/region for shopping.
© 1996-2021, Amazon.com, Inc. or its affiliates