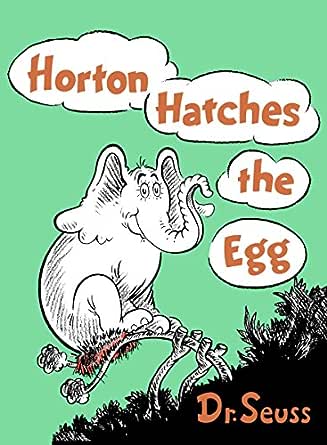 You've subscribed to Classic Seuss! We will preorder your items within 24 hours of when they become available. When new books are released, we'll charge your default payment method for the lowest price available during the pre-order period.
Update your device or payment method, cancel individual pre-orders or your subscription at
Your Memberships & Subscriptions 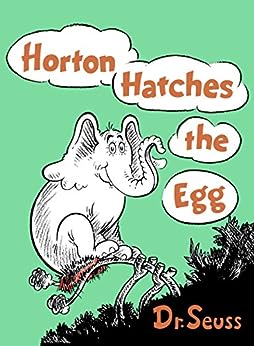 Shop our favorite brands
Check out our wide selection of third-party gift cards.
Shop now
click to open popover
Books In This Series (29 Books)
Page 1 of 1Start OverPage 1 of 1
Previous page
Next page 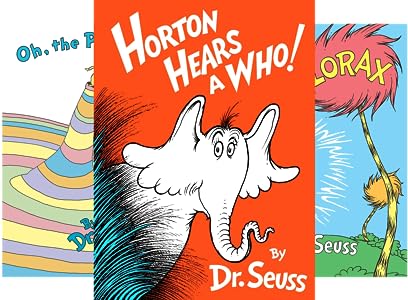 Poor Horton. Dr. Seuss's kindly elephant is persuaded to sit on an egg while its mother, the good-for-nothing bird lazy Maysie, takes a break. Little does Horton know that Maysie is setting off for a permanent vacation in Palm Springs. He waits, and waits, never leaving his precarious branch, even through a freezing winter and a spring that's punctuated by the insults of his friends. ("They taunted. They teased him. They yelled 'How Absurd! Old Horton the Elephant thinks he's a bird!'") Further indignities await, but Horton has the patience of Job--from whose story this one clearly derives--and he is rewarded in the end by the surprise birth of... an elephant-bird. Horton Hatches the Egg contains some of Theodor Geisel's most inspired verse and some of his best-ever illustrations, the dated style of which only accentuates their power and charm. A book no childhood should be without. (Ages 2 to 7) --Richard Farr --This text refers to an alternate kindle_edition edition.

THEODOR SEUSS GEISEL—aka Dr. Seuss—is one of the most beloved children’s book authors of all time. From The Cat in the Hat to Oh, the Places You’ll Go!, his iconic characters, stories, and art style have been a lasting influence on generations of children and adults. The books he wrote and illustrated under the name Dr. Seuss (and others that he wrote but did not illustrate, including some under the pseudonyms Theo. LeSieg and Rosetta Stone) have been translated into thirty languages. Hundreds of millions of copies have found their way into homes and hearts around the world. Dr. Seuss’s long list of awards includes Caldecott Honors for McElligot’s Pool, If I Ran the Zoo, and Bartholomew and the Oobleck, the Pulitzer Prize, and eight honorary doctorates. Works based on his original stories have won three Oscars, three Emmys, three Grammys, and a Peabody.


From the Hardcover edition. --This text refers to an alternate kindle_edition edition.

Illus. in color by the author. It's the talk of the jungle when an elephant hatches an egg. Extravagant nonsense and rollicking verse. --This text refers to an alternate kindle_edition edition.

Everyone loves Dr. Seuss! A true original, he wrote and illustrated over 50

classic children's books with total sales of more than 100 million copies. For

children of all ages.

4.9 out of 5 stars
4.9 out of 5
790 global ratings
How are ratings calculated?
To calculate the overall star rating and percentage breakdown by star, we don’t use a simple average. Instead, our system considers things like how recent a review is and if the reviewer bought the item on Amazon. It also analyzes reviews to verify trustworthiness.

Ken McWilliams
5.0 out of 5 stars Great For Classroom Use
Reviewed in the United States on October 8, 2017
Verified Purchase
I bought this book to use in a lesson about rhyme schemes. I was teaching eighth grade at the time and was a bit skeptical about how well this book would be received by my students. I need not have worried. The students loved the story, the rhyming, and even the art. Many of my students are classified as "low performers," and read several levels below their grade. Using books like this helps motivate those students to engage in the lesson and also promotes language arts skills.
Read more
10 people found this helpful
Helpful
Report abuse

Deedra F.
5.0 out of 5 stars Integrity, faithfulness, perserverence, inner strength
Reviewed in the United States on March 26, 2016
Verified Purchase
This is one of my most memorable childhood books. In fact, it shaped my life to become a person of integrity. It is a fun read and a great choice for teaching perseverance and inner strength to children. Strangely, I find myself even quoting this book nowadays from time to time... "I meant what I said and I said what I meant. An elephant's faithful 100%"
Read more
12 people found this helpful
Helpful
Report abuse

Bob
3.0 out of 5 stars Except for the cruelty... A good book
Reviewed in the United States on May 2, 2019
Verified Purchase
I didn't realize until "Horton Hears a Who" how cruel Dr. Seuss books can be at times. I don't love how the monkeys capture, whip, beat, and tease Horton in that book. So it didn't come as a complete surprise to encounter the scene in "Horton Hatches the Egg" when hunters point rifles at Horton to kill him. That made for some awkward explaining / avoidance with our 2 year old. But she does enjoy this book.

It's also worth noting the illustrations in this book look much more sketched -- at times they even seem unfinished -- compared to other Dr. Seuss books.

L.Henderson
5.0 out of 5 stars A Great Book for Teaching the Short /e/ Sound!
Reviewed in the United States on December 2, 2019
Verified Purchase
Although this story is a great children's classic, I purchased it to teach my Kindergarten class and for working with SPED kids to teach them the short /e/ sound. I went through this book and changed Horton's name (including the title) to ED by using stickers. I tell my students every time I say egg, elephant or Ed they say the short /e/ in unison. This book has worked great for teaching the short /e/ sound! My students love the book too!
Read more
One person found this helpful
Helpful
Report abuse

Haven Wildcat
5.0 out of 5 stars Horton is my superhero!
Reviewed in the United States on April 27, 2016
Verified Purchase
Horton is a great role model! He only appears in 2 books (that I've found), but he should be in more! Not only does he keep his word, he does it at great personal cost, even when faced with his own death! Read this book to your kids over and over. I have 8 and they are all grown up, and none of them have turned into an axe murder yet, so I guess it worked!
Read more
7 people found this helpful
Helpful
Report abuse

Barb Lindenmayer
5.0 out of 5 stars Fun rhyming story with a lesson
Reviewed in the United States on October 27, 2016
Verified Purchase
GREAT children's book!! Love the rhyme style of writing. It is written in a way that both children and adults enjoy the story. The italics font help the reader read with inflection and the moral of the story is a good one.
Read more
6 people found this helpful
Helpful
Report abuse
See all reviews

David M.
5.0 out of 5 stars Houghton
Reviewed in the United Kingdom on September 10, 2019
Verified Purchase
Best book ever . My mum read this to me when I was a child . Bought back a lot of memories.
Read more
One person found this helpful
Report abuse

Kindle Customer
5.0 out of 5 stars Firm favourite
Reviewed in the United Kingdom on April 1, 2014
Verified Purchase
This book has been a firm family favourite ~ to the point of being able to recite it. Usually at family dinners. I have purchased this for the next generation - unfortunately it does not have the wonderful hardcover like the old book we have. Fantastic story. Made better when I saw an elephant bird.
Read more
One person found this helpful
Report abuse

deepak s fernandes
5.0 out of 5 stars A book that teaches kids perseverance
Reviewed in the United Kingdom on December 20, 2016
Verified Purchase
This book has a lot of nice points about it. The bad points are only that the mother bird comes across as really, really mean
Read more
Report abuse

Goblin
5.0 out of 5 stars Five Stars
Reviewed in the United Kingdom on July 26, 2017
Verified Purchase
Just as expected thanks
Read more
Report abuse
See all reviews