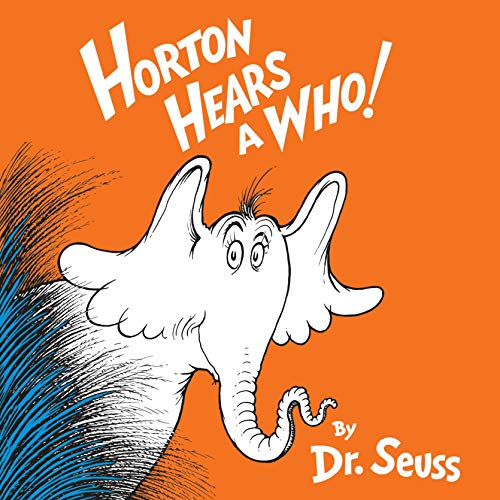 Horton Hears a Who

Horton, the lovable elephant, tries to protect tiny creatures on a speck of dust.

Your audiobook is waiting!
Learn more about membership
List Price: $2.79
You Save: $0.35 (13%)
By completing your purchase, you agree to Audible’s Conditions Of Use
Sold and delivered by Audible, an Amazon company
Share

Amazon Customer
2.0 out of 5 stars Book damage
Reviewed in the United States on January 30, 2019
Was disappointed when we received the book that there was water damage to the inside the book. The pages were wrinkled and the bottom of the pages have water stains. Box wasn't wet nor was the cover.
Images in this review

Armando N. Roman
5.0 out of 5 stars A book with heart.
Reviewed in the United States 🇺🇸 on July 6, 2011
Verified Purchase
For some reason, my mom never let me read Dr. Seuss books when I was little, so I missed out on many of his tales until I was older. I'd snuck in a reading of The Cat in the Hat at the school library here and there, saw the videos of The Lorax and How the Grinch Stole Christmas in the early 90s too, but that about does it for Dr. Seuss and me. But when my daughter was just 1, one of her favorite books to have read to her was a Dr. Seuss book (There's a Wocket in my Pocket!). I thought it was cute, and we got her a few other Dr. Seuss books, and she liked them all. But recently I read her Horton Hears a Who! at the book store, and she absolutely loved it- never distracted for a second, genuinely wanting to know what was going to happen to that little speck Horton was talking to. And you know, I even cared because of how desperate Horton was to protect it from everyone who thought it was nothing.

Horton is a kind and gentle elephant, minding his own business when one day, a little speck starts talking to him. It turns out that the speck of dust actually contains a little world of Whos, and Horton saved them by placing them on a flower instead of letting it drift off into oblivion. Horton did the right thing because, as we all know, a person's a person, no matter how small! This is the main lesson in the book, and a very important one that people of all ages should respect. As Horton carries the flower around, various creatures try to disturb it, and think Horton's crazy for saying that people live on something as tiny as a speck of dust. One creature goes so far as to throw it in a huge field full of identical flowers. Desperate to save everyone from a terrible fate, Horton tries to get the Whos to shout as loud as they can so that everyone can hear them. They shout as loud as they can, but it's not working. Seemingly every Who is doing their best to be loud, except for one. Is that one little person just what they need to be heard?

While the book is a little on the long side compared to other Dr. Seuss books we own, it's a -story- book. Not just a bunch of fun rhymes and crazy character designs. Sure it has its share of weird made-up words and funny looking characters, you get attached to poor Horton who can't convince anyone that there's life on that little speck of dust. The message of 'a person's a person, no matter how small' gets across without being overdone. It was kind of sad to see how the movie handled everything, and didn't have the heart that this book does. I highly recommend this one, and hope to read more great stories from Dr. Seuss soon.

DLBFerrell
5.0 out of 5 stars Big Hit
Reviewed in the United States 🇺🇸 on August 23, 2022
Verified Purchase
Was a gift and they loved it
Read more
Helpful
Report abuse

Joel C. Hansen
5.0 out of 5 stars Justice for the marginalized and ignored
Reviewed in the United States 🇺🇸 on December 14, 2021
Verified Purchase
Horton Hears a Who has long been one of my favorite stories. I've heard its message, "A person's a person, no matter how small," used as a teaching tool for kids to understand the injustice of abortion. But reading the story recently with my own kids, it struck me how universal this message of love, kindness, compassion and perseverance truly is. This is a violent book that includes themes of destruction, imprisonment and threats of death, but Horton himself is a purely nonviolent hero. He chooses to listen when no one else does. He searches through three million flowers in order to rescue the one. Horton teaches us the power of our voice, in speaking up for ourselves as well as for others. And he shows us how to turn enemies into friends by nonviolent resistance to evil. For anyone wanting to teach their children (or themselves) to listen to the cries of the marginalized, the poor, or the silent cries of the unborn, the themes of this story are special and powerful. This is a great book to give away to anyone who will read it.
Read more
5 people found this helpful
Helpful
Report abuse

AmwBogan1
5.0 out of 5 stars A favorite but long read
Reviewed in the United States 🇺🇸 on June 16, 2022
Verified Purchase
My kids love listening to this book. But it’s a long read, longer than most other Dr. Seuss books. A classic that’s worth including in our book collection.
Read more
Helpful
Report abuse

Cecilia Gomez
5.0 out of 5 stars My 8 year old great grandson loves the Who books,
Reviewed in the United States 🇺🇸 on April 27, 2022
Verified Purchase
My great grandson loved the book, l really don’t know if it was age appropriate for an 8year old , too old for this book or maybe l need to look for older childrens books , affordable also for myself as I have 3 great grandchildren that are around that age
Read more
Helpful
Report abuse
See all reviews

David P - Cowley Oxon
4.0 out of 5 stars Excellent product and service
Reviewed in the United Kingdom 🇬🇧 on November 5, 2015
Verified Purchase
A purchase for the Sunday school book store.
It ties in with some of the parables taught.
Good quality book at a fair price.
We had a difficulty in obtaining from the local chain stores and appreciate the availability offered on-line.
Read more
One person found this helpful
Report abuse

Mrs. J.M.Bodnar
5.0 out of 5 stars Horton hears a Who
Reviewed in the United Kingdom 🇬🇧 on December 7, 2010
Verified Purchase
My 5year old grandson and I loved reading this together,
and it has inspired him to look for more Dr.Seuss books.
I
The writing is fun,and also challenges little ones to try
more difficult words and make their own assessments of
who had the moral high ground-kangaroo or elephant!
Read more
Report abuse

Steve El-Sharawy
5.0 out of 5 stars An engaging story with wonderful illustrations throughout
Reviewed in the United Kingdom 🇬🇧 on March 1, 2013
Verified Purchase
Horton is a firm favourite in our household and I am sure it will be for some time to come. The animated movie is a little scary for my son due to the eagle, but in the book he is a lot 'friendlier' looking. This is a really good tale and introduces many ideas such as loyalty, self belief, caring for others and going against popular opinion. The rhyming style of Dr Seuss is especially effective in this book, I certainly enjoy reading it out loud.
Read more
Report abuse

Marta
5.0 out of 5 stars Wonderful Horton
Reviewed in the United Kingdom 🇬🇧 on November 4, 2007
Verified Purchase
All children should have the oportunity to read about Horton. He is brave and has a great and tender soul. He can teach us all that being good and being helpful makes the world a better place.I highly recomend this book as well as Horton hatches and egg.
Read more
2 people found this helpful
Report abuse

Mrs. EJ Harris
5.0 out of 5 stars So nice to have the actual book as well as the movie
Reviewed in the United Kingdom 🇬🇧 on April 10, 2014
Verified Purchase
Lovely version although some of the print is quite hard to read - black print on dark blue background - always tricky to read in the lamplight at bedtime - no problem now we have read it 50 times - we know it off by heart!
Read more
Report abuse
See all reviews