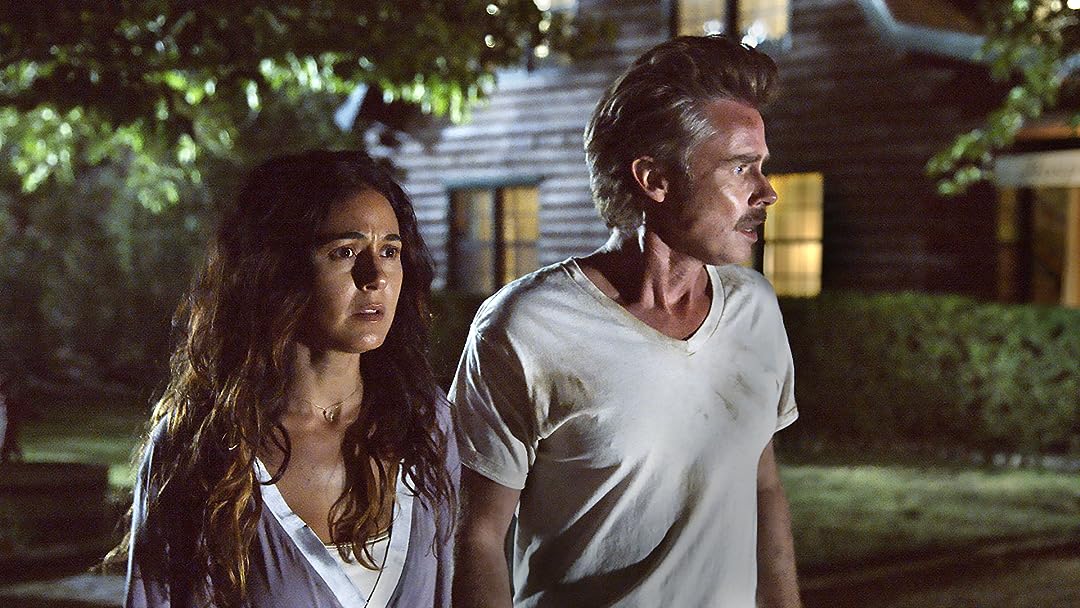 (56)
4.91 h 20 min201813+
In a brutal fight for survival, a former prostitute (Emmanuelle Chriqui) with a checkered past must protect her son (Conner McVicker) when an ex-con (Sam Trammell) recently released from prison, a crooked cop (JR Bourne) and a thug (Jim Beaver) bring trouble to her isolated bed and breakfast.

markbcReviewed in the United States on December 10, 2018
5.0 out of 5 stars
Fast-paced suspense, and an exciting, believable story.
Verified purchase
I don't watch too many suspense action movies, but I really enjoyed this movie.
It was easy-to get drawn-in and it doesn’t lose its pace from start to end.

The plot unfolds with life, suspense, and action being presented at a brisk pace, but without being excessive. Still, it felt authentic, and it keeps you rooting for the good guy or central character, Donna, (although “good” quickly devolves into a very relative standard!).

“Donna” (Emmanuelle Chriqui), runs a remote bed and breakfast with few customers. She is a very strong character and makes the movie interesting in how she copes with a corrupt and really sleezy sheriff (JR Bourne), and then two new guests.
- First is an ex-con (Sam Trammell) who seems likable at first, but turns out to be there just to recover a past treasure. He also has a wrinkle in his past that is adds an emotional twist to the plot.
- Next is an older villain (Jim Beaver) who looks like a bad guy and proves just how evil he is very quickly after arrival.
- Finally, the counterpoint to these characters, is Donna’s son Jimmy (Conner McVickers). He is a symbol of innocence; and a nice son who helps his mother with the b-n-b. He may be a bit slow-witted, but he loves his mom and understands that something may be going wrong.

All of these characters spin around Donna in a tight story that covers just a few days but includes many past refermces and events –and it is all over in the blink of an eye.

Ms Chriqui is believable and a very human character, who deals with a bizarre whirlwind situation in ways that will leave you nodding or gasping. The other actors are well matched and equally fine. Each has just the right amount of force or character to blend or contrast with Chriqui’s “Donna” at each tender, suspenseful, or action-oriented juncture. Each does a nice job of adding a different flavor to the story; and, without spoiling the plot, each seemed to get what he deserved in the end...

I will watch this movie again some time and definitely recommend it.
:-)

R. C.Reviewed in the United States on December 23, 2018
3.0 out of 5 stars
Casting director made the best decisions
Verified purchase
This movie made me think of the few miserable weeks I spent working at an ice cream shop as a favor to a friend of a friend. I had a degree, and over a decade of good work experience. I was trying something new, and that endeavor had left me with a few weeks that were open with nothing to do, so I agreed to work for crappy pay in the heat without much thanks or assistance from the owner because it was only for a short time. I’m guessing that’s what was going on with this movie.

It probably sounded like an okay B-movie thriller when the script was first pitched, and whomever did the casting picked experienced actors who’ve made careers out of supporting and guest-star roles. The performances far outshine the roles, and the script they’re reading. The movie is basically a bunch of characters who are interesting enough, if a little flat playing out the setup of one twist after the other instead of a solid story. Emanuelle Chriqui and J.R. Bourne stand out as well as Conner McVicker as the teenaged son with developmental delays.

Emanuelle Chriqui manages to look comfortable in the lead character (Donna)’s skin. She works well in negative space, or the small moments where there’s a pause in the action. She’s living in an illusion of freedom and independence. She’s in the middle of nowhere with her teenaged, developmentally delayed son and owns a B&B where there are few visitors. Any profits are shared with the crooked Sheriff who shows up and bullies her. Later, he shows up drunk at three in the morning and his advances are seemingly shot down when she shuts the door in his face and locks it. The initial image of her freedom to refuse him shatters when he simply unlocks the door. She sullenly and quietly submits to sex with him and it’s clear that any boundaries she tries to maintain are fragile at best, but they’re there in her unwillingness to play her part in his story with a smile.

The Sheriff is written more as a caricature of a moustache-twirling bad guy. He checks a lot of boxes: one-dimensional, domestic-abusing, sexually-coercing, financially-dominating, and of course he’s a crooked cop. J.R. Bourne puts something in the character that makes it a little uncomfortable for me to watch; it would be familiar to anyone who’s had a relationship with an abuser. He desperately clings to a narrative of his own and outside the moments when he’s violently knocking Donna back on script (He literally tells her they’re rewinding their conversation and doing it again) he’s lavishing her with clumsy, unwanted affection and attention. His desperation to connect with her is palpable, and we’d feel bad for him in these moments if he didn’t bookend them with junior-high-level bravado and insults while reminding her that he’s completely in control of every aspect of her life, including paying for her birth control pills. The sudden changes in his mannerisms are more effective than the dialogue itself.
4 people found this helpful

Shannon McIntireReviewed in the United States on November 27, 2019
4.0 out of 5 stars
Great Film- More Charachter Development Would Be Needed
Verified purchase
I went into this movie with extremely low reviews. I was afraid that it would be too low-budget or corny or boring, etc. However, I was pleasantly surprised by the pacing, the atmosphere and the acting (especially of the adolescent son). The only thing that is making me hesitant on giving a 5 star review is the lack of a backstory for the main female character. We can ascertain that she has had a checkered past but how did she come clean, why did she resort to prostitution, exactly what was her connection to those two men, etc. I feel like that should have been more fully explored. I would certainly recommend this title to someone with a few hours to kill.
2 people found this helpful

Lady MiaReviewed in the United States on November 14, 2019
5.0 out of 5 stars
I enjoyed watching this movie
Verified purchase
At beginning I had mixed feelings about this movie, but at the end I would say played realistic. Story shows how complicated life can be and how some of us struggles for so many reasons. I would recommend this one for sure.
4 people found this helpful

L.BenzReviewed in the United States on June 21, 2020
5.0 out of 5 stars
Action and Suspense
Verified purchase
I like my movies hard to predict and this one had it all. Surprises here and there. I liked the ending as well, but part of me kept thinking she began as a whore, screwed the idiot sheriff and hard to see someone like her 'win'. Nobody IRL gets that lucky. Only in the movies.

Jesse P.Reviewed in the United States on May 3, 2019
5.0 out of 5 stars
Good Movie
Verified purchase
I think Emmanuelle Chriqui is adorable, and this movie agrees
4 people found this helpful

BusterReviewed in the United States on January 11, 2020
1.0 out of 5 stars
Boring and more boring
Verified purchase
This movie was absolutely ridiculous! Nothing happened even within the middle. All that was occurring was sex and more sex blah blah, definitely not for people seeking out a real horror flick. The acting was ok not great but the overall plot was drawn out. I almost fell asleep

Jerry LReviewed in the United States on February 23, 2020
5.0 out of 5 stars
Good story line.
Verified purchase
It was an interesting movie. Somewhat predictable but didn't burn you out on any specific part of the movie. Well written and acted with a few surprising things thrown in to make the story work out to the ending.
See all reviews
Back to top
Get to Know Us
Make Money with Us
Amazon Payment Products
Let Us Help You
EnglishChoose a language for shopping. United StatesChoose a country/region for shopping.
© 1996-2022, Amazon.com, Inc. or its affiliates