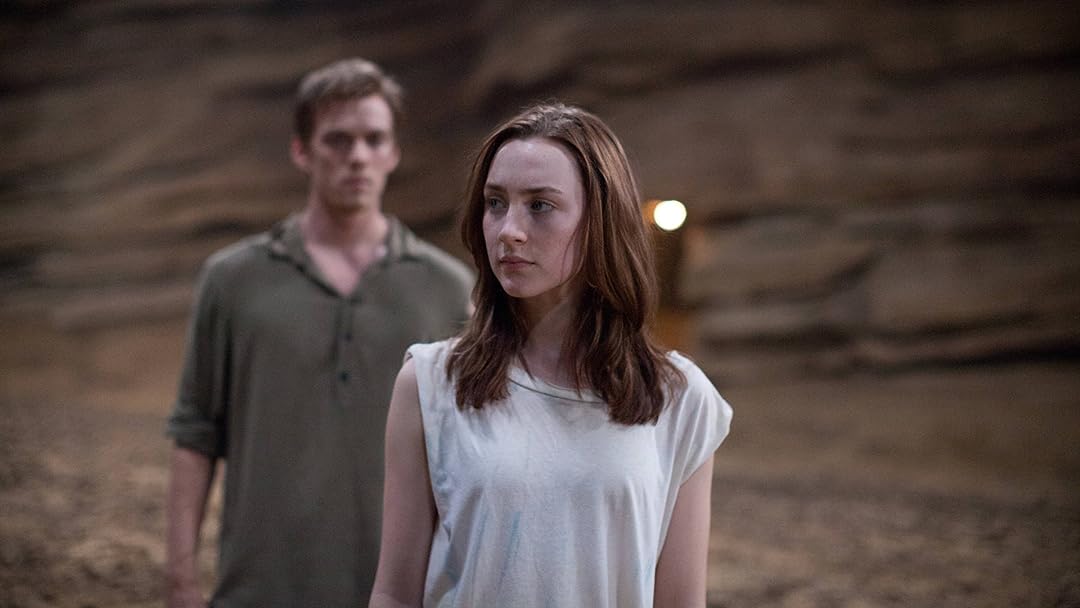 (6,344)
5.82 h 5 min2013X-RayPG-13
From Stephenie Meyer, the creator of the worldwide phenomenon The Twilight Saga, comes this daring and romantic thriller based on The New York Times #1 bestselling novel.

OctaviaReviewed in the United States on May 26, 2020
1.0 out of 5 stars
Unapologetically Awful
Verified purchase
Oh where to begin... I absolutely adore the book. It’s probably my favorite book, so I was extremely excited to see it made into a movie. And that’s where the excitement ended. The point of the book was that the souls took over then planet in a way that is almost indistinguishable to humans, besides the fact that the planet was no longer dying and there were no more wars. However, whoever made this movie made it into a hyper-extraterrestrial, dull and unfulfilling shadow of the book. Of course there are limitations when it comes to making a book into a movie, however they didn’t even cast people that were in anyway similar to the characters in the book. Dry acting, lack of character or plot building... It was just all around a disappointment. My only hope is in several years someone will remake it into something that captures your attention like the book does. To be honest, I would give it zero stars if it was possible.
13 people found this helpful

Ray ReedReviewed in the United States on July 13, 2020
2.0 out of 5 stars
I hate to be "the book is better", but this movie just didn't do it justice...
Verified purchase
I had just finished the book and wanted to see the movie. The book is this magnificent thing to read that I couldn't put it down. I read it over a 24 hour period.

The movie, however, is not good. I just can't wrap my mind around how someone who hadn't read the book could even appreciate what's going on. Those that have read the book, if like me, will probably be frustrated by the lack of character development and the lack of motivational development. The movie stays relatively true to the source, but it's shoving a big book into two hours. They take liberties here and there of course and it's not a perfect 1 to 1 adaptation, but you can understand the decisions. They cut a lot out. Wanda doesn't tell stories like a teacher. Jamie isn't prevalent. Doc doesn't get much development. Other characters are only named as they die or are in altercations. It's just not well done. I'd say it had huge budget constraints or something. The vision was there, but it was poorly executed and it feels like too much is cut.

The acting is good from the veteran actors. William Hurt, Diane Kruger, and my personal favorite Jake Abel doing great jobs. Even Emily Browning, though brief, did a good job. Saoirse Ronan was believable, but it was probably the role she was given. Playing a character with two independent minds is hard to pull off and she did it well.
Max Irons was not a good fit for Jared. It was bad. The other actors that could potentially have been great just didn't get enough screen time. Scott Lawrence was criminally under represented on screen as Doc. I was looking forward to seeing how Doc would be portrayed.

I bought the Prime HD version. It played wonderfully and the sound was great. The subtitles seemed accurate. Prime's movie service never disappoints.

If you've read the book and you want that extra sprinkle of seeing it acted out, sure get this movie. If you haven't read the book, don't get the movie. You'll probably just be confused or irritated by exposition that is poorly done.

WillsWei22Reviewed in the United States on July 23, 2021
5.0 out of 5 stars
An All-Time Favorite of Mine (Book & Movie)
Verified purchase
The movie is probably best received by those who have read the book. There is a ton of backstory in the 600 page book that wasn’t able to be included in the movie that would have provided immense context to certain characters or situations. The movie does feel a bit rushed as everything develops so quickly, but it’s hard when dealing with time constraints.

Jared/Melanie & Ian/Wanda are a couple of great relationships. “When you touch me…it’s…I don’t want you to stop” (Melanie to Jared by the fire early in the movie) & “I love you in every way that I can” (Wanda to Ian when she says goodbye near the end of the movie) are two quotes that stick with me & melt my heart each time I watch those scenes.

I want to beg Stephanie Meyer to write the 2nd & 3rd books of this story. Even if there isn’t a movie made for them.

Lastly, Saoirse Ronan as Melanie/Wanda is stunningly beautiful to me. I can’t get enough of her in this movie…
3 people found this helpful

SamanthaReviewed in the United States on June 14, 2022
1.0 out of 5 stars
Loved the Book, Hate this movie
Verified purchase
I saw the movie first and it was meh. Read the book and loved it. Watched the movie again and hated it.

Where do I even begin. 1. The casting was terrible. The only actor/character that was done well was Uncle Jeb. He was more or less how I imagined him. 2. They didn't portray the souls or their culture well at all. Wanderer never would have been removed by force from her host. 3. So much was cut out from the book, which I understand happens in movies, but so little of actual the story/plot remained to make the two feel even related. 4. And what's with those silver cars and motorcycles? I know they're supposed to visually indicate who the seekers are, but it was still kind of cheesy. Souls, even seekers, are supposed to mimic the humans they were inhabiting, not wear all white and drive around in chrome cars.

In conclusion, the movie feels like a cheap knockoff of the book. Maybe they were working with an extremely low budget? Maybe they wasted it all on the CGI effect for the souls themselves? That was the only part they did well. When Wanderer removed that one soul, it did look amazing. Still, I'd give it 0 stars if I could.

WendyReviewed in the United States on November 8, 2017
5.0 out of 5 stars
Could watch over and over!!
Verified purchase
Absolutely adore this film! Have watched it so many times. Amazing storyline and flow throughout. This is a must watch and top 10 of mine! It is very sad that the author never pursued it with a second book/movie. This is one that eveyone loves, but did not get the recognition it deserved when originally released. At least we have this one and only of what could have been a great series.
15 people found this helpful

Becky's 2 centsReviewed in the United States on May 1, 2021
3.0 out of 5 stars
Poignant
Verified purchase
This movie was entertaining, but disappointing at same time. One annoying thing about most film adaptations is the movies usually exclude, rearrange or summarize the essential elements that attracted books' fan base. Although condensing a novel into a 125 minute film is difficult task because several factors have to be taken into consideration. However, the script writers of The Host basically rewrittened the original storyline. So, if you are a fan of the novel, The Host, lower your expectations and ignore the many inconsistencies before watching this movie, and just enjoy its entertainment value.
2 people found this helpful

Foster BradyReviewed in the United States on September 16, 2016
2.0 out of 5 stars
Although I loved the book so much
Verified purchase
Although I loved the book so much, I do not have the same affection for the movie. It was actually so insignificant to me that I couldn't remember if I had watched this movie or not a year later...which I had. I rented it through Amazon and I watched it again and then quickly remembered why I never thought about it again after the first time. There's just not a really excited way to verbalize the thoughts of a character or have a 2 way conversation between a character and the voice inside her head. The futuristic concept and functions were okay and the cave was probably the best scenery. I remember thinking about it when I saw they were going to make the movie-"Well, that probably won't be too good, considering most of the movie is a girl having conversations between herself and the alien that has taken over her body." And even though I REALLY wanted to like it, it just didn't work. They had a better cast than I thought they could achieve, so kudos for that. Some books just aren't meant to be made into movies.
13 people found this helpful

R. DiosiReviewed in the United States on March 7, 2018
5.0 out of 5 stars
More than the run of the mill SIFY movie
Verified purchase
If you are interest in a good Blue Ray Video this is as good as any Blue Ray I have purchased. When I looked at some the reviews by people giving only one star I was surprised that most were based only on the movie itself. If you are into SCFI like Star Wars or Star Trek, this movie is not for you.. However if you can appreciate a well crafted plot with lots of threads that connect to other scenes, this is your movie..If you like the human element and the alien beliefs, this is a great movie. It is wrapped in empathy, compassion, bonding and love. It is a real treat and deserves a look. I might add that the story was written by a woman and the nature of the story reflects that perspective. Enjoy!
10 people found this helpful
See all reviews
Back to top
Get to Know Us
Make Money with Us
Amazon Payment Products
Let Us Help You
EnglishChoose a language for shopping. United StatesChoose a country/region for shopping.
© 1996-2022, Amazon.com, Inc. or its affiliates