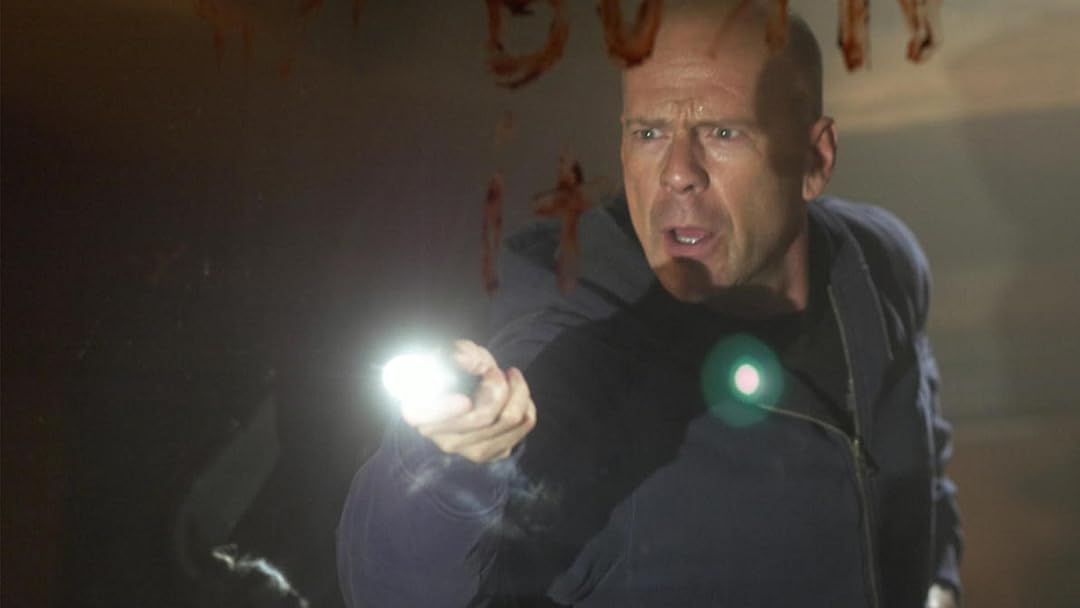 AbeReviewed in the United States on April 5, 2021
1.0 out of 5 stars
HORRIBLE BW Movie
Verified purchase
Ok I like Die Hard & lots of BW movies---this isn't one of them;
If u like serial killers, lots of dead bodies, *LOTS* of murders [including minors & kids] ----maybe you'll like this one.
In WAR movies u expect this GRAPHIC VIOLENT C*R*A*P*; But this isn't war;
In WAR at least the boy is 18, & has a gun & is *TRAINED*, has a rough idea of who's bad & who's good;
Our society is really messed up [US] to think this is "normal" but simple & peaceful nudity----is off-limits.

Matto BorkeReviewed in the United States on August 26, 2019
5.0 out of 5 stars
Bruce Willis carries it
Verified purchase
The screenplay might be a repeat, but BW keeps it fresh, suspenseful, convincing. The director, thankfully, also keeps the plot moving forward so there is no wasted time or scenes. Contrast this with Max Payne (1) in which I repeatedly fast forwarded 10 seconds at a time in order to avoid boredom. Great to see that Willis can still act, a shame he doesn't find better scripts, but this one is good enough.

webhawk50Reviewed in the United States on August 13, 2012
3.0 out of 5 stars
Unfairly panned by the critics?
Verified purchase
Okay. We're not talking a great film here. But we are talking about a very entertaining popcorn piece that has been, IMHO, unfairly panned by critics. Yes, the plot is so full of holes that you could float an aircraft carrier through it. It IS enormously silly & outrageous. But this is an action flick fer cryin out loud. It's for entertainment and it does that well. Okay, so Bruce Willis goes way over the top with some of his scenes. I strongly suspect the director behind this, urging Willis on. Or maybe it was Willis' decision to have complete mental breakdowns throughout the flick. Whatever the reason, Willis is a very good actor and,in spite of some very cheesy moments, plays his character very, very well. Yeah, okay, it's cliche-ridden as hell & is fairly formulaic, but damnit, it's a good action flick & very entertaining. In spite of it's obvious flaws, I had a good time watching it.
4 people found this helpful

A. SandocReviewed in the United States on October 15, 2005
4.0 out of 5 stars
A very good homage to classic Italian gialli
Verified purchase
The last year or so has seen the rise of several new directors from France who've made quite a splash with their Hollywood debuts. There's Alejandro Aja with Haute Tension (or Switchblade Romance/High Tension) who brought back the late 70's early 80's sensibilities of what constitutes a good slasher, exploitation film. Then there's Jean-Francois Richet whose 2005 remake of John Carpenter's early classic, Assault on Precicnt 13 surprised quite abit in the industry. Neither film made too much in terms of box-office, but they did show that a new wave of genre directors may not be coming out of the US but from France of all places. Another name to add to this list is Florent Siri and his first major Hollywood project Hostage shows that he has the style and skills to make it in Hollywood.

Hostage is another Bruce Willis vehicle that was adapted by Doug Richardson (wrote the screenplay for Die Hard 2) from Robert Crais' novel. Hostage is a very good thriller with a unique twist to the hostage-theme. Willis' character is a burn-out ex-L.A. SWAT prime hostage negotiator whose last major case quickly ended up in the death of suspect and hostages. We next see him as chief of police of a small, Northern California community where low-crime is the norm. We soon find out that his peace of mind and guilt from his last case may have eased since taking this new job, but his family life has suffered as a consequence. All of the peace and tranquility is quickly shattered as a trio of local teen hoodlums break into the opulent home of one Walter Smith (played by Kevin Pollak). What is originally an attempt to steal of of the Smith's expensive rides turn into a hostage situation as mistakes after mistakes are made by the teens.

From this moment on Hostage would've turned into a by-the-numbers hostage thriller, but Richardson's screenplay ratchets things up by forcing Willis' character back into the negotiator's role as shadowy character who remain hooded and faceless throughout the film kidnap his wife and daughter. It would seem that these individuals want something from the Smith's home and would kill Willis' character's family to achieve their goals. The situation does get abit convoluted at times and the final reel of the film ends just abit too nicely after what everyone goes through the first 2/3's of the film.

The characters in the film are developed enough to give each individual a specific motivation and enough backstory to explain why they ended up in the situation they've gotten themselves into. Willis' performance in Hostage is actually one of better ones in the last couple years. The weariness he gives off during the film is more due to his character's state of mind rather than Willis phoning in his performance. I would dare say that his role as Chief of Police Jeff Talley is his best in the last 2-3 years. The other performance that stands out has to be Ben Foster as the teen sociopath Mars. His character and Foster's performance straddles the line between being comedic and over-the-top. What we get instead is one creepy individual who almost becomes the boogeyman of the film. In fact, the last twenty minutes of Hostage makes Mars into a slasher-film type character who can't seem to die.

The real star of the film has to be Florent Siri's direction and sense of style. From the very first frame all the way to the last, Siri gives Hostage the classic 70's and 80's Italian giallo look and feel. Siri's use of bright primary colors in conjuction with the earthy, desaturated look of the film reminds me of some of the best work of Argento, Bava, Fulci and Lenzi. In particular, Siri's film owes alot of its look to films such as Tenebrae, The Bird with the Crystal Plummage, and The Psychic. Certain scenes, especially the penultimate climax in the Smith home, take on an almost dreamlike quality. Siri's homage to the classic giallis even gives Hostage some sequences that would comfortably fit in a 70's slasher film.

Florent Siri's Hostage is not a perfect film and at times its increasing tension without any form of release can be unbearable to some people, but it succeeds well enough as a thriller. It also shows that Siri knows his craft well and instead of mimicking and cloning scenes from the giallis he's fond of, he emulates and adds his own brushstrokes. The film is not for everyone and some people may find the story convoluted if not dull at times, but for me the film works well overall. Siri is one director that people should keep an eye on.
6 people found this helpful

Bird WatcherReviewed in the United States on August 3, 2017
5.0 out of 5 stars
exciting and tense
Verified purchase
lot of violence but watchable - sometimes tense.
some surprises \ that you don''t often
see in this genre. im a bruce willis fan so did
enjoy this for the most part
4 people found this helpful

Anisha DharmadasaReviewed in the United States on May 21, 2017
4.0 out of 5 stars
Picture Quality can be better! Worthy Bruce Willis movie!
Verified purchase
A better Bruce Willis movie and the man has some depth to playing cops. A set of villains. Picture quality of Blu isn't a good upgrade but then again this is the first series of Blu out.
4 people found this helpful

Steve RaczReviewed in the United States on March 22, 2020
4.0 out of 5 stars
Good movie, quite different from the book
Verified purchase
Older movie which is entertaining. The book by the same name is much better and the story line much more developed.

S TReviewed in the United States on February 15, 2021
5.0 out of 5 stars
WELL WORTH YOUR MONEY
Verified purchase
It was a very clean, suspenseful and very entertaining
See all reviews
Back to top
Get to Know Us
Make Money with Us
Amazon Payment Products
Let Us Help You
EnglishChoose a language for shopping. United StatesChoose a country/region for shopping.
© 1996-2021, Amazon.com, Inc. or its affiliates