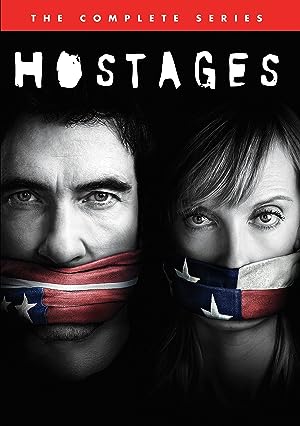 Season 1
(171)6.72014X-RayNR
Hostages is a thrilling and suspenseful new drama series about a family caught in the middle of a grand political conspiracy that will change their lives forever. Toni Collette stars as Ellen Sanders, a top surgeon in Washington, D.C., who has been tapped to operate on the President of the United States ��_ and then kill him. Dylan McDermott and Tate Donovan also star.

T. L.Reviewed in the United States on October 15, 2013
4.0 out of 5 stars
Started off a bit slow but suspense really picks up in Episode 4!
Verified purchase
After watching the pilot episode, I immediately liked the premise for the show despite the fact there were several scenes that more than likely would OR, could not EVER have possibly been allowed to take place had this been a real life event. However, I was easily able to overlook that fact & enjoy the show simply because....this is NOT a real life event. It IS, however, just a fictitional story meant to be played out on your tv screens in approximately 42 minute increments per week. It'll be interesting to see just how the writers for Hostages plan to continue this storyline, keep up with the current level of suspense, keep as many of the same main actors/actresses involved and, do all of this without bogging down or dragging out any of the original story,
Being a writer myself, I can't even begin to imagine how it could be done without the show falling apart so, I'm definitely going to keep watching this one! Although the first two episodes were a bit on the slow side in the suspense department; starting with episode 3, that begins to change. And with Episode 4, titled: "2:45PM" , I literally was biting my bottom lip as I sat on the edge of my seat! So, if you watched the first episode or two and felt it too boring, give it another chance. I recommend watching at least 4 episodes before giving up on the show. It really does get much better.
8 people found this helpful

T. BradyReviewed in the United States on November 30, 2013
4.0 out of 5 stars
Summary of one of the best shows for 2013
Verified purchase
I would rate all the episodes in this series 4 stars, simply because the entire show is excellent. Story lines, actors, actresses and whomever and whatever else is involved is great. It is an up and down type of excitement which keeps you there. You think that the rest of the show will be no good at one point and 2 minutes later it comes back and gets you and keeps you there. It has done that for each episode so far that I have purchased. I am not and probably won't be disappointed. This show is great.

La SmurfReviewed in the United States on December 18, 2013
4.0 out of 5 stars
Slow at first, then can't wait for next
Verified purchase
Initially I wondered how a tv show based on a hostage situation could continue for a season. After watching the first few episodes, I got a bit bored, reminded me if never-ending daytime soap operas. Then, I waited a couple of weeks and tried watching again and was hooked. The storyline presented some unexpected spirals and turns. Needless, to say, the twists are intriguing and the wait for the final ending is with great anticipation. The show is not expected to return next season and if so, Viewers hope the final episodes provide some finality to the storyline.

TYSEXPReviewed in the United States on December 29, 2013
2.0 out of 5 stars
Who is the real Hostage?
Verified purchase
Series becomes lost in itself. The writers seem to be 'making it Jo's as they go along. All characters inept in their job or role in the family. Very, very unbelievable. In fact, not believable at all. Thirteen of the fifteen episodes have been shown.The remaining two cannot save this mismash. A waste of talent and time. The scripts are as lame as The Following with Kevin Bacon. Maybe the script writers of the two series should write Jackass 4.

EvaReviewed in the United States on October 24, 2013
3.0 out of 5 stars
Sigh, almost but not quite
Verified purchase
The problem is that the premise, a group can successfully keep a whole family hostage for this long, is just not real. I see so many opportunities for the family to reach out and get help. The doc could have spoken to the secret service senior agent. Once she knew Duncan's identity---she had all the power she needed. Her cell can record so she could have recorded her husband's shooting and gone from there.

Then there is the moment she decides to leave her kids in the wind, knowing they are being pursued to go back to her husband. Wow, I am supposed to appreciate this woman? Choosing her faithless husband, while I get it she still loves him, over her kids. ALL She had to do at this point was call the cops to her house and get on the bus. End of the line for the whole conspiracy.

This moment has come and gone so many times. The world is too large for this kind of hostage taking to survive this long. It doesn't matter how many people they have in place---she had all the power the moment she escaped. Go to an attorney and that would be all the concealment she'd need. She knew the husband had stayed behind, calling him just put him in danger and gave them leverage. She just is not believably that stupid.

I wanted to like it but just can't get past the constant feeling that the characters are not real people. They are just too dumb. The young man is smart enough to deal under his family and school's nose and he uses a pay phone. Every kid in this country knows how caller ID works. My kid knows how to block the outgoing number, so I am sure he would have.

The boyfriend.... the girl could confide in him with her parents advice and he could go to an attorney and they could contact an outside police force with all kinds of photos, recordings etc.... The family has easy access to various cells so they could quite easily record evidence of their incarceration to pass on to the boyfriend Boyd.

It just requires too much suspension of disbelief to watch any more.

The actors and the quality are the only positives. The story is the source of the failure.

Edith KrumholzReviewed in the United States on January 15, 2014
5.0 out of 5 stars
Hostages
Verified purchase
I liked this show very much and preferred it over "Blacklist." I was a faithful watcher but somehow missed the 15th episode. That is where Amazon came to my rescue. I liked viewing it this way and would not hesitat to purchase any other programs or movies. Thank you Amazon. The picture was outstanding and so was the captioning which I must have.

movieaddictReviewed in the United States on October 30, 2013
5.0 out of 5 stars
Great new show
Verified purchase
I do not see why so many people are giving this show bad reviews. What, is it because it is not about vampires and witches? Is it too true to life? I mean, this is a solid series. Great acting, great stories. Don't listen to the bad reviews. Watch it yourself and form your own opinion. You won't regret it.

Doug in Las VegasReviewed in the United States on December 17, 2013
4.0 out of 5 stars
Keeps me interested.
Verified purchase
Missed a few episodes so I purchased on Amazon because plot changes so quickly I couldn't catch up without viewing the missed episodes. Overall a good cast, McDermott is my favorite. Not a fan of the choice for Dr. Sanders. The series has good pace, enough complexity to keep me from guessing what is to come. Curious to see how they will sustain the plot. May be the downfall.
See all reviews
Back to top
Get to Know Us
Make Money with Us
Amazon Payment Products
Let Us Help You
EnglishChoose a language for shopping. United StatesChoose a country/region for shopping.
© 1996-2021, Amazon.com, Inc. or its affiliates