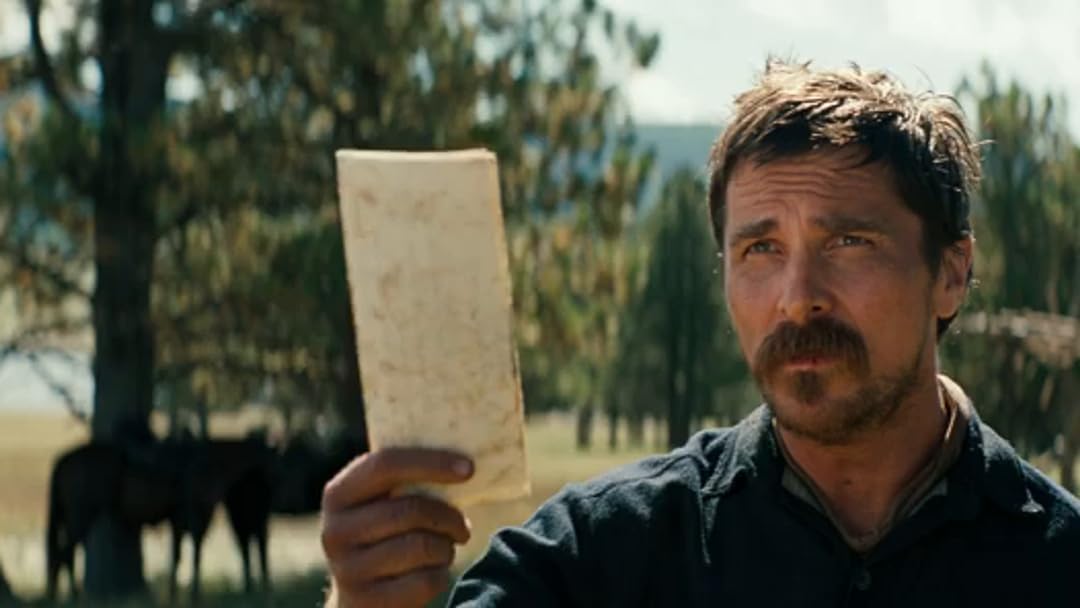 (8,485)
2 h 14 min2018X-RayHDRUHDR
In 1882, a legendary Army captain reluctantly agrees to escort a Cheyenne chief and his family through dangerous territory.

Keith GilbertReviewed in the United States on April 29, 2018
5.0 out of 5 stars
Real Indians in a believable story...all greatly done.
Verified purchase
I loved the production and acting; Christian Bale pulled off the part perfectly...and they left most if not all of their peculiar political views out of most of it while capturing many real sentiments of the time. Wes Studi made the whole storyline real and with feeling. Years ago a dear friend of mine, Chief Eddie Little Sky, deceased, of the Lakota Nation, set out to become a 'real' Indian actor in a business that in the 50's was just as glad to use Pacific Islanders instead for the parts in such films as this. Wes Studi has accomplished what my old friend could not; recognition and an actual livelihood from the Motion Picture Industry!
129 people found this helpful

John JayReviewed in the United States on September 30, 2018
2.0 out of 5 stars
Hollywood PC
Verified purchase
I really wanted to like this movie - great casting, great acting, great scenery - no, fantastic scenery! Despite all that, it's a forgettable movie that's best rented, not owned. The basic story could have been much more interesting, but instead it's just a 2 hour apology tour, and a not too convincing one at that. After years of fighting the Indians and seeing their friends killed, it's hard to imagine the sudden conversion to friendliness and respect by the soldiers (or the Indians). The script/dialogue seems to have come straight from a college course. While there may be some valid points, it's not believable to think the movie characters would have thought that way in the situations they were in. The final insult was that although God was discussed frequently (in a mostly negative way), and the main character is shown frequently reading, in the end it's Caesar, not the Bible. Again, just not believable that someone in that situation would spend their spare time reading Caesar - just don't show him reading at all.
61 people found this helpful

Sam BellReviewed in the United States on April 23, 2018
5.0 out of 5 stars
Brutal
Verified purchase
Christian Bale plays an Army Captain assigned to escort a Cheyenne Chief and his family back home. Bale is outstanding. Rosamund Pike will break your heart. The whole cast is really spectacular. Hostiles has great writing and acting with a whole bunch of grey area because you are seeing all sides of the violence. Just a warning: It is called Hostiles and the film lives up to the title. Brutal. Hostile.
107 people found this helpful

Amazon CustomerReviewed in the United States on April 27, 2018
5.0 out of 5 stars
Future Cult Classic Western
Verified purchase
The quality of this movie was a surprise to me, as is the fact that it did not receive much attention when it was in theaters. First, the acting is top notch from everyone, especially from leads Bale and Studi, but there a numerous supporting case members who put in great performances. Second, production values are top notch, the cinematography is stunning at times, esp. in Montana at the end. Lastly, the plot, while a bit predictable, is engaging and thoroughly enjoyable. I really have nothing bad to say about this movie. I would describe this movie being heavily influenced by violent Coen movie like No Country For Old Men/True Grit, with bits of reflective Terrence Malick mixed in. A must see for any fan of Westerns, it is easily one of the best since Unforgiven.
89 people found this helpful

john fowlesseReviewed in the United States on April 26, 2018
5.0 out of 5 stars
One of the finest westerns I have ever seen
Verified purchase
One of the finest westerns I have ever seen. Finally great actors like Christian Bale and Rosamund Pike find a film that adequately displays their talents. Somehow it reminds me of the greatest westerns by John Ford such as the Horse Solders. There's a seen in this movie where everyone is riding on horse back against the setting sun which is straight out of the Horse Solders. Finally a screen writer who quotes D.H. Lawrence and not
Marvel Comics. Finally Hollywood shows that it is capable of something more than mindless nihilistic murder and mayhem.
95 people found this helpful

PeggyReviewed in the United States on April 22, 2018
5.0 out of 5 stars
Good lesson on racial hatred towards Indians and The white man. There are some very violent scenes.
Verified purchase
Great portrayal of the Violence of traveling in the west. This movie had a lot of great characters and good storyline. I would highly recommend it.
30 people found this helpful
See all reviews
Back to top
Get to Know Us
Make Money with Us
Amazon Payment Products
Let Us Help You
EnglishChoose a language for shopping. United StatesChoose a country/region for shopping.
© 1996-2022, Amazon.com, Inc. or its affiliates