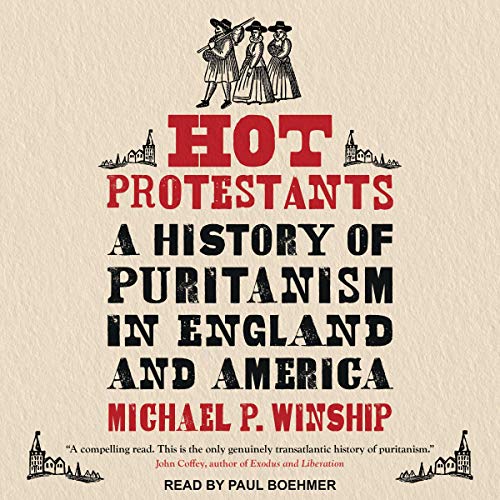 Hot Protestants: A History of Puritanism in England and America

4.1 out of 5 stars
4.1 out of 5
14 global ratings
How are ratings calculated?
To calculate the overall star rating and percentage breakdown by star, we don’t use a simple average. Instead, our system considers things like how recent a review is and if the reviewer bought the item on Amazon. It also analyzes reviews to verify trustworthiness.
Top reviews

Gary E. Gilley
5.0 out of 5 stars "Hot Protestants" is well-documented and well-written
Reviewed in the United States on January 10, 2020
Verified Purchase
Michael Winship is a professor of history at the University of Georgia and a prolific author of historical volumes. In Hot Protestants, a term used by their contemporaries for Protestants who would later be called puritans (p. 1), Winship traces the history of puritanism from its roots in the 1540s to its collapse, on both sides of the Atlantic around 1690 (p. 1). John Hooper, who was executed in 1555 (p. 10-17), is identified as the first puritan. He, along with all puritans who followed, rebelled against the Book of Common Prayer and the accompanying rituals, especially the wearing of Catholic vestments and kneeling at the Lord’s Supper. The early Protestants viewed the Pope as the Antichrist and the Catholic Church as the devil’s church, therefore anything that smacked of Romanism in doctrine or practice was rejected by hot Protestants. Vitally connected to their attempts to purify the church would be the English monarchy, which tended to swing from Catholic to Protestant and back on a regular basis. Puritans wanted neither Rome nor a watered-down form of Protestantism (i.e. the Church of England). Their ultimate desire was a nation shaped after the model of John Calvin’s Geneva, which they saw as the gold standard (p. 22). Over the decades they would battle kings and queens, archbishops and parliament, and one another, in an effort to duplicate Geneva, first in England, and later in the North American colonies. The efforts, while seemingly successful at times, ultimately failed on both continents.

Winship skillfully weaves through the theological and political issues relevant to puritanism. At times the puritans were persecuted for their beliefs and at other times they were honored and allowed freedom. During the years of Oliver Cromwell in Great Britain, and in the early decades in the American colonies, the puritans were even dominant. But in the end, puritanism could withstand neither the external nor the internal pressures.

R. Lee Hadden
4.0 out of 5 stars Rise and Fall of Puritanism
Reviewed in the United States on August 27, 2020
Verified Purchase
A good book on the early history of Protestantism in England and the US. The book is well written, except it gets bogged down in places with schismatic theology and English politics.One sentence shows how some of his complexity can be daunting: "Such a shattering of England's organic religious unity was unimaginable and unforgivable to many Presbyterians, especially with all the erroneous and heretical sectaries that the Congregationalists refused to disavow sheltering under the Congregationalist umbrella of Independency."
The early chapter on Puritanism in Massachusetts was very good, as is the concluding chapter on the Salem witch trials. A good book, but only for those who are interested in a deep book of Protestantism and Puritan history.
Read more
One person found this helpful
Helpful
Report abuse

David
5.0 out of 5 stars A superb history of Protestantism
Reviewed in the United States on December 18, 2019
Verified Purchase
I thoroughly enjoyed reading this book. The author is a history scholar, which is evident in his inclusion of hundreds of footnotes, most of which refer to an extensive number of references (often original sources from the 16th and 17th centuries). But this is not some dry historical treatise. Winship has written this book to appeal the average person, who may not care to dig into footnotes. He tells fascinating stories of events spanning the years between 1540 and the early 1690s. What made the stories so engaging for me is his focus on the people involved in these events.
The book begins by describing the tumultuous times during which the Protestants first broke from the Catholic church, both in England as well as on the European continent. Winship then narrates two and one-half centuries of conflicts among Protestants about nearly every aspect of this new religion including its rituals, practices, icons and the roles and privileges of clergy and non-clergy. Often these conflicts were deeply personal for individuals, especially those concerning implications for salvation, who could be baptized and the timing of those baptisms and in some cases whether one might be punished for what were essentially crimes within whatever was the current theological view. Other times the conflicts seemed to be about asserting power and control over parishioners or another clergy. Through these descriptions the book provides a very solid understanding of the evolution of Protestant theology.
Winship also describes ways Protestantism was deeply intertwined with the colonization of New England. We see the growing tension between obedience to Godliness and obedience to monarch. As this tension grows, we see how some colonies stretched their wings of autonomy only to eventually be hemmed back in by the monarch. I was fascinated by Winship’s description of the competing influences of theology, civil laws and trade practices. Old world Puritanism finally falls apart by the end of the book, having been supplanted by greater tolerance of varying Protestant theologies. The way Winship describes that demise through the lens of the witchcraft trials in the late 1600s is especially intriguing.
To use a cliché, I had a hard time putting down this book. Really. For a couple weeks I took every opportunity to sit and read it. And, I was continually bugging my wife, daughter and friends to tell them the things I was learning. On a larger scale, this book made me think a lot about the lack of agreement among Protestant denominations over what in their theologies constitutes actual truth. Winship’s accounts of the ugly conflicts about these truths helped me better understand how theology evolves and underscored for me the importance of separation of church and state. The book clearly shows how Hot Protestantism can wreak havoc.
Read more
One person found this helpful
Helpful
Report abuse

Andrew Werley
3.0 out of 5 stars Can’t see the forest for the trees
Reviewed in the United States on May 17, 2021
Verified Purchase
Good content but really hard to follow the chronological history and major turning points through the overwhelming detail in the biographies.
Read more
Helpful
Report abuse

Gary Hill
5.0 out of 5 stars Knowing what motivated the early settlers.
Reviewed in the United States on April 30, 2019
Verified Purchase
Really filled in the blanks in church history! Great background to church history.
Read more
One person found this helpful
Helpful
Report abuse
See all reviews
Back to top
Get to Know Us
Make Money with Us
Amazon Payment Products
Let Us Help You
EnglishChoose a language for shopping. United StatesChoose a country/region for shopping.
© 1996-2021, Amazon.com, Inc. or its affiliates