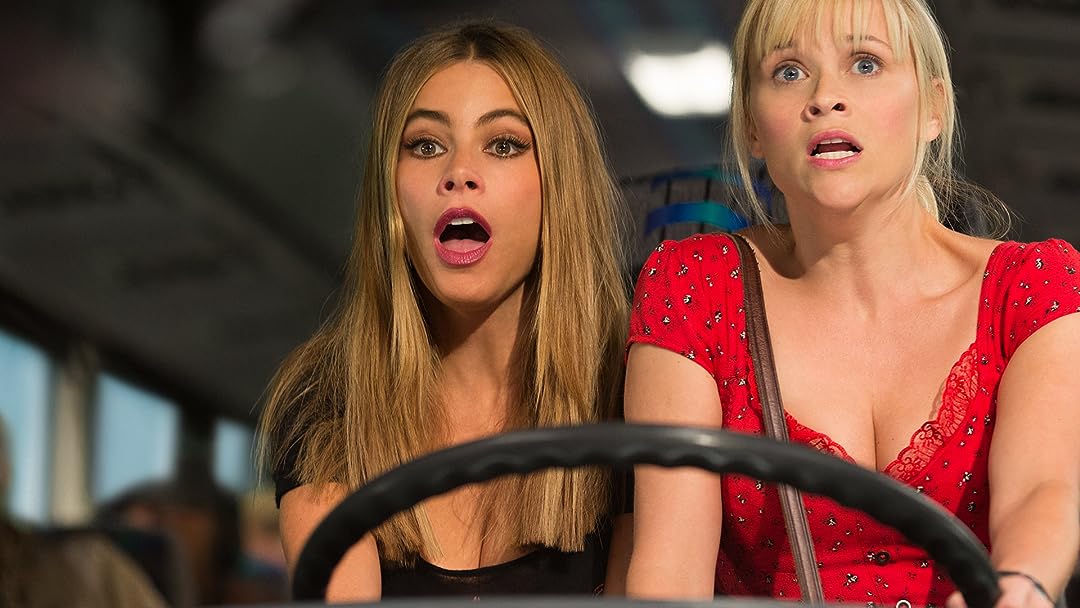 (18,633)
5.21 h 27 min2015X-RayPG-13
An uptight and by-the-book cop (Reese Witherspoon) tries to protect the sexy and outgoing widow (Sofia Vergara) of a drug boss as they race through Texas pursued by crooked cops and murderous gunmen.

LeslieBReviewed in the United States on November 23, 2021
5.0 out of 5 stars
A Silly Movie But
Verified purchase
Just for the sake of having it when I'm in the mood. A female "buddy" movie that isn't that bad if you don't think too much. There is a chemistry between Reese Witherspoon as a bumbling female cop and Sofia Vergara as a mobster's wife, but the whole story seems sort of sloppy almost like parody or something. There are moments of genuine fun but the story is ridiculous. The cop is hired to guard the mobster's wife until her husband's trial comes up, but it becomes apparent that bumbling cop has been set up when it comes over the news that she has fled with the mobster's wife and both are fugitives and have assassins on the tail. The assassins are clumsy and stupid (as is the movie itself). The two women bond and insult each other of their ethnic differences. Dumb blonde southern belle and Latino mobster's wife. Enjoyable if you don't think about it too much.

Linda Kay WardReviewed in the United States on July 10, 2016
5.0 out of 5 stars
Get Ready to Laugh Your Socks Off.
Verified purchase
[[ASIN:B00XCGU74S Hot Pursuit]]A family and friends movie everyone (over age 13) will be laughing at and having fun later repeating script (southern and columbian accents). Kinda a cross between slapstick comedy (Reese and Sofia chemistry is hilarious) and mafia drug boss bad cop action (bloodless exciting). Randy (Robert Kazinsky) was an added plus (dorky cop girl who follows protocol falls in love) along with other well known actors (Richard T Jones, John Carroll Lynch) who enjoyed playing their part. Will be glad to watch again with another group of friends before the main movie of the evening.
6 people found this helpful

93Reviewed in the United States on April 18, 2020
1.0 out of 5 stars
god awfully unfunny
Verified purchase
I love silly comedies. This one I rented and paid for and yet couldn't make it through. Normally I like Reese Witherspoon but she was so annoying in this pointless, stupid film. I'm no film snob by any means but this is perhaps the worst movie I have seen in a long time. Horrible script, horrible acting, all around just an unfunny and annoying movie. If you want a great comedy with Reese try "This is War". That is how you do a silly, fun , comedy action movie. This movie should be an embarrassment for Reese and Sofia.

Master Of SoulReviewed in the United States on August 24, 2015
4.0 out of 5 stars
This was a fun movie!
Verified purchase
OK - I watched this to see Sophia Vergaras acting in a new movie.
She was quite funny, but over the top, overacted at many times. Don't get me wrong, I mean if any girlfriend of mine was to have as big a mouth as hers in this film, I'd be OK with that for a short while.
The real surprise here was Reese's acting - she really made the movie - She had excellent interaction with Sophia - And I'm not talking about the girl scenes. They played off of each other terrifically - several good, good laughs.

This was a fun movie to watch with my wife - we both had several laughter times, and that's what entertainment is all about.

For that alone, I'll give this 4 Stars, and will probably watch it again.

swinkydinkypugReviewed in the United States on June 15, 2016
3.0 out of 5 stars
Better than I expected.
Verified purchase
Cute movie. Wasn't expecting much but got more than I expected. Love Reese. Interesting to see her play a naive, fumbling character. Never seen Modern Family but due to media overexposure really didn't expect to like Sophia Vergara. Pleasantly surprised that SV's character wasn't as one dimensional as it could have been. She brought a nice range and depth to a role that could easily have been one dimensional. Surprising chemistry between the leads.
I must say I don't usually go for comedies, I'm more a thriller, action, drama type.
It's entertaining and worth a rental if you've got a few hours to kill.
2 people found this helpful

BenjaminReviewed in the United States on May 23, 2016
3.0 out of 5 stars
"Hot Pursuit" is a female buddy comedy that can't stop getting in it's own way."
Verified purchase
"Hot Pursuit" is an amusing if somewhat far fetched (even for a comedy) road movie featuring two very likable stars in the cast. Reese Witherspoon and Sophia Vergara make nice team and I kept wishing throughout the film that they had a better script to work with. The film got too concerned with plot points and ridiculous twists to give these two very talented women much to but follow along with it. The best moments in the film are when plot was put aside and they were given time to get to know each other. I just wish it had happened more often.
3 people found this helpful

John LammReviewed in the United States on May 26, 2016
3.0 out of 5 stars
Good looking women in a movie about good looking women
Verified purchase
It is a fun, easy to follow movie. I kept waiting for a little more skin - but that's me. I did fast forward several minutes of it, and watched the hour and 20 minutes in about 40 minutes. I laughed, I cried, it became a part of me. Realistically there isn't much to review - it is two babes wandering around the country trying not to get killed. They have various costumes and outfits to wear..again, could have used more skin...but that is about all there is to the movie. Enjoy it for what it is.
One person found this helpful
See all reviews
Back to top
Get to Know Us
Make Money with Us
Amazon Payment Products
Let Us Help You
EnglishChoose a language for shopping. United StatesChoose a country/region for shopping.
© 1996-2022, Amazon.com, Inc. or its affiliates