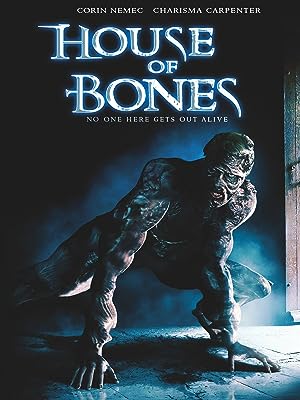 (142)
4.31 h 30 min201018+
A team of TV ghost hunters travel to investigate a haunted house surrounded by rumors of paranormal activity. Upon their arrival they find a foreboding house with a mind of its own. With time running out, will they be able to make it out alive?

Author Angie MartinReviewed in the United States on November 20, 2020
5.0 out of 5 stars
Very enjoyable!
Verified purchase
I never read reviews until after I've watched the movie - and I'm so glad I didn't here. This movie was much better than the 1-stars it rec'd. I'd say give it a go before reading the reviews and make your own decision from there. I definitely found a gem in this one.

I thought the acting was on the spot. There were bits of overacting here and there, but nothing that threw me off the scent of a delightful horror movie. Marcus Lyle Brown as Greg was my absolute favorite. He was so believable, seemed genuine, and really captured the spirit of his character. I also loved the banter between the characters. From watching, I got the sense that the crew had known each other a long time and that the psychic (who was new on the scene) was just trying to figure out where she fit in.

What I loved most about this movie, though, was that there wasn't a slow buildup to the action. Things started happening in the house immediately. It didn't take half the movie to get to some horror. It's one of those little pet peeves I have about haunted house movies - the ghosts or spirits just take too darn long. But this house was amped up and ready to go from the minute they walked in. I loved that so much! I wish more movies would go in this direction.

Were there a few things that didn't make sense? Yeah, the cop could have been edited out. But overall, I can easily recommend this movie to other horror fanatics. It's on my re-watch list now, and I'll be recommending it to my horror group as well.

n. hReviewed in the United States on September 15, 2018
4.0 out of 5 stars
A Living House-some spoilers
Verified purchase
I didn't have much hope for House of Bones, namely because horror films are made by the bucket load these days without quality of story or direction. However, I was pleasantly surprised to learn that, while this film may lack many things, it does make a decent story for viewers.

In particular, House of Bones gives somewhat decent background lore as to how the house came to be the way it is and why. However, there were a few points in the lore that I wish had been flushed out further...

I would've liked to see the slave quarter aspect further developed, maybe have the combined trauma of the slaves and the evil of their master perpetuate the continued existence of the house. Or flush out their experience, as they were the main reason the house was able to come alive. I also wish we'd learned more of the history of the other owners of the house. We were told what they added to the place (tools, the garden), and it would've been interesting to learn what their choice of victims were. Did they use their interests to kill?

I think my favorite part of the house was equating it to having a type of body. Often haunted house films are full of malignant poltergeists, with the house itself having little to do with the shenanigans going on. It was cool that this time around the house was the main threat, being an actual, living being. Even though the original owner had intended to live through the house, the house became its own creature instead. I feel like more could've been done with this point besides having fleshy walls and brittle bones, but I'll take what I can get.

I also liked the fact that not everyone was picked off each time they were split up. I never got the sense of invincibility for any of the characters, and I'm pleased that the movie ending followed this through. I also liked how Bub was the first to be taken and later given back. The ending was great, showing how the house had survived for so long by not only developing a visceral aggression but also through convincing someone to be its new owner.

Drawbacks to the film were graphics, some of the acting was stale and lacked emotion, characters were flat and stereotypical, camera shots could be too jerky and all around looked cheap. But overall, just randomly picking this film to watch lead to some good surprises.

I know this film wasn't meant to be a masterpiece, but I can definitely see the potential. If you are up for a different take on the ghost hunter/haunted house genre and can overlook the drawbacks, you may enjoy this film.
9 people found this helpful

DaleReviewed in the United States on January 20, 2021
2.0 out of 5 stars
Storyline is pretty good but the acting and special effects are atrocious. Very Predictable.
Verified purchase
the movie starts out with a a boy being sucked into a house. After this, the murder house is followed by a into into a really bad TV Show about sinister places with an actor that you hope gets killed immediately, he doesn't. There were a few people that just added nothing to the movie and served no real purpose. There was a problem with this movie where it isn't really a haunted house and is more of a haunted piece of land that is alive. Even that isn't accurate though because you have vehicles that movie on their own just being around the property. As the name states, this house is made in part of human bones and has bodies throughout the house inside and out. The overlays of CGI are so bad a 6 year old can produce better. I get this is a super low budget movie but WOW. The 4 main characters once you get through the bad "Sinister Sites" TV star, they perform decent enough except one idiot who is really stupid. Even the special effects are bad. Like 70's & 80's horror movie bad. Take the bad out, this actually has a good story line. You just have to get past the over the top characters that add nothing to the movie, horrible special effects, pathetic dialog, atrocious CGI and pretty pathetic reactions. Could of been better with a higher budget and with a few characters eliminated and somebody who actually knows how to do Special Effects and CGI.
One person found this helpful

HermanatorReviewed in the United States on November 12, 2019
1.0 out of 5 stars
Makes no sense!!!
Verified purchase
I very rarely say this about a movie because everyone has their own tastes, but do yourself a favor and skip this one. It makes no sense. Not even the sexy and talented Charisma Carpenter can save this film. It could have been good but the ending was SOOOOO ridiculous and stupid, it made me mad. very mad. It just leaves me wondering. Does anyone make a good horror movie anymore???
2 people found this helpful

Bakuryuu TyrannoReviewed in the United States on February 11, 2011
3.0 out of 5 stars
Kinda surprised
Verified purchase
This time, Syfy have comissioned Nu Image, production company behind Shark Attack 3 and Skeleton Man, to produce a haunted house movie.

It kinda works. But really it's accidental genius; besides their notably "so-bad-its-good" films; Nu Image movies generally consist of the basic building blocks of an archetypical film.

There are some good ones although the "average" for such a film tends to be pretty weak.

The result? That the basic building blocks of a haunted house movie, set up correctly, are ultimately more effective than the majority of the "competition".

And that's great, because haunted house related films really need establishing time. The film didn't leave me feeling unsettled, but it had me buying the concept that the house was haunted & the characters couldn't just leave.
11 people found this helpful

Shadow GaugeReviewed in the United States on November 20, 2020
3.0 out of 5 stars
Worth a watch.
Verified purchase
Good story, surprisingly original. The biggest 2 marks against the movie I feel was the lack of seriousness, and the obvious "made for TV" vibe. TBF it's a horrible movie, but it's done right... Except for "star" of the show, a just shy of washed up actor that is there for nothing more than comedy relief in a movie that's not in the slightest bit funny. But with the gross abundance of poorly done movies out these days, this one is almost a sigh of relief, because it didn't completely suck.

GpailkidsReviewed in the United States on July 14, 2018
4.0 out of 5 stars
This plot has been done before, many times....but it's got some twist to make it a little orginal.
Verified purchase
The whole paranormal investigating reality tv show, who actually finally encounter a real haunted location is a plot that has literally been done 100 times before. But unlike most of those, this one isn't found footage. All that said...this one is pretty good. Some of the twist give it some originality. The acting is good, along with the special effects, definitely a higher end B movie. I recognized 2 of the actors from some of those sci/fi shark movies. All in all, if this is a genre you enjoy then give it a chance, it's definitely watchable and worth finishing.
2 people found this helpful

Timothy A. MaceReviewed in the United States on February 7, 2021
1.0 out of 5 stars
Don't Waste Your Time
Verified purchase
Overall terrible plot. It seemed to have been edited together from several sources in an effort to make a coherent story but failed miserably. Corin Nemec's parts have clearly been filmed completely separately from the rest - I doubt the rest of the cast even met him. His was the only palatable performance. Speaking of performances, whomever is responsible for casting Ricky Wayne needs to be relieved of his or her job. His singularly terrible acting almost sinks the move by itself.
See all reviews
Back to top
Get to Know Us
Make Money with Us
Amazon Payment Products
Let Us Help You
EnglishChoose a language for shopping. United StatesChoose a country/region for shopping.
© 1996-2022, Amazon.com, Inc. or its affiliates