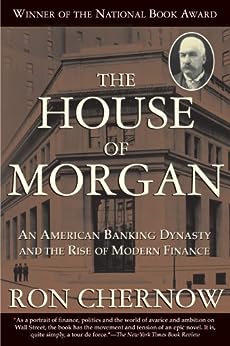 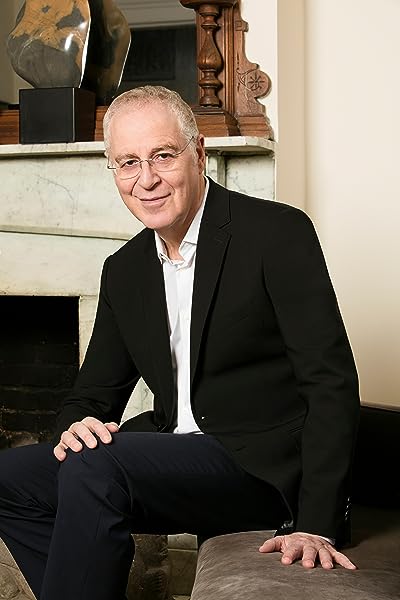 The House of Morgan: An American Banking Dynasty and the Rise of Modern Finance Kindle Edition

Winner of the National Book Award

“As a portrait of finance, politics and the world of avarice and ambition on Wall Street, the book has the movement and tension of an epic novel. It is, quite simply, a tour de force.”—The New York Times Book Review

“As informative and entertaining a history, especially of the period from 1880 to 1930, as this reviewer has ever read . . . Nowhere has our tenuous financial system been better described than by Chernow.”—John Rothchild, Los Angeles Times Book Review

“An astonishingly detailed and fascinating story of the Morgan banks and the men who have run them. Chernow uses his gift for description to bring out vividly the personalities of his principals.”—Don Keown, San Francisco Chronicle

“Epic . . . Chernow melds deep insights into the life and times of Morgan bankers over 150 years with the flow of world history and the growth of banking and finance. With rich detail and warmth, he brings to life the defunct species of gentleman banker.”—Bill Barnhart, Chicago Tribune
--This text refers to an alternate kindle_edition edition.

RON CHERNOW is the author of six books, including The Warburgs, a history of the German-Jewish Warburg banking family, and the award-winning biographies Alexander Hamilton and Titan: The Life of John D. Rockefeller, Sr.
--This text refers to an alternate kindle_edition edition.

Chernow vividly portrays the influence that the Morgan banks have had on the history of the Western economy since the late 18th century. The epic story of the development of the American industrial experience is inextricably related to the history of the Morgan banks. Though this fascinating story is virtually the same as that told by Kathleen Bunk in Morgan Grenfell 1838-1988 ( LJ 12/89), Chernow adds color and personality with an emphasis on the 20th-century development of the bank. Working with recently discovered Morgan archives, he reveals institutional details long hidden by the protective secrecy of the family. This superb history will be an important book. BOMC, Fortune, and History Book Club featured alternates. --Joseph Barth, U.S. Military Acad. Lib., West Point, N.Y.
Copyright 1990 Reed Business Information, Inc. --This text refers to an alternate kindle_edition edition.
Read more

4.5 out of 5 stars
4.5 out of 5
756 global ratings
How are ratings calculated?
To calculate the overall star rating and percentage breakdown by star, we don’t use a simple average. Instead, our system considers things like how recent a review is and if the reviewer bought the item on Amazon. It also analyzes reviews to verify trustworthiness.
Top reviews

Kristin A. Weidenaar
4.0 out of 5 stars The World of Banking
Reviewed in the United States on October 10, 2018
Verified Purchase
This wasn’t my favorite of Ron Chernow’s books but it is well researched. There was more detail than I really wanted to know. I loved the other three books I read that he wrote—Hamilton, Washington, and Grant—I highly recommend those. If you want to know all about banking and JP Morgan then this book is worth reading.
Read more
17 people found this helpful
Helpful
Report abuse

Tree Ponders Leaf
3.0 out of 5 stars Very valuable, not enjoyable
Reviewed in the United States on January 4, 2016
Verified Purchase
I must admire Chernow's resolve to research his subjects so thoroughly. This was my second go-around after Titan. These books have tremendous value as insight into the times and thoughts of the world's first Corporate Titans. However, both books, but this one in particular is tremendously difficult to read. I find myself labouring through each chapter, midway through and not enjoying the experience. I look back and have learned a great deal, but it was an incredible pain to get there.
Read more
29 people found this helpful
Helpful
Report abuse

Tzvika Barenholz
4.0 out of 5 stars the good parts are great
Reviewed in the United States on August 10, 2017
Verified Purchase
The book is fascinating and has aged well (written ±30 years ago!). The parts that cover the 19th century through about world war II are fascinating and unmissable. The latter parts towards the end of the book, seem to be written out of necessity because the book had to cover the whole history of the bank. I believe a later more experience Chernow would have had the wisdom to stop earlier and make a more compact book.
As it stands, the good parts are great, for their context about how massively powerful Morgan was, and the beautiful historical anecdotes included.

George
3.0 out of 5 stars More like a diary than a history of Morgan's role and significance
Reviewed in the United States on May 16, 2021
Verified Purchase
It is telling that I have learned more about the role JP Morgan played in the development of the industrial economy from TV documentaries. For example, this book fails to describe the disagreement between JP and his father over supporting the development of new technologies such as electricity. JP understood the industrial revolution and the importance of electricity, steel, railroads, and other key industrial industries. A recent TV documentary described how, over his father's objection, Morgan financed Edison then enforced patents against Tesla to create General Electric. Basically, Morgan cobbled together the industrial economy while his father thought the Morgan bank should only finance governments and other established interests. That should be the central theme of the book. Instead it mentions but does not really describe in any depth how the development of many key industries was initially chaotic and unstable. People like Morgan saw the opportunity to buy the weakened companies and combine them to end the price wars, overcharging and other destructive competitive practices inhibiting the development of these and other industries. In effect, Morgan made his fortune and reputation acting as the first regulator. The flaw in the plan was that he proved the need for regulation but the public soon realized that regulation was a role for government, not bankers, leading to busting the trusts. Without delving more into this history the book is mostly just a list of wives and houses and art collections. Meh.
Read more
Helpful
Report abuse

gary w petersen
5.0 out of 5 stars all about morgan.
Reviewed in the United States on January 18, 2020
Verified Purchase
if you are interested in high finance in the 19th and 20th century this book is a treasure. i had no idea how important this bank was. i was investigating the financing of ww 1 and i found what i was looking for. i read every so often how the american jew bankers used their influence to entangle the u. s. in that war on the side of the allied powers but not true. they were pro german and tried to prevent help for england. there are many events to learn about. i hope you like the book as much as i do.
Read more
3 people found this helpful
Helpful
Report abuse

NEdwards
4.0 out of 5 stars Wishing for an Update
Reviewed in the United States on July 1, 2014
Verified Purchase
a long book and a very interesting and helpful one from the aspect of understanding how world politics and events were shaped by the financial side - especially the influence of one dominant family - and a dominant person within that family.

As all Chernow books, well researched and reasoned. My favorite of his: Titan - the John D. Rockefeller biography. Clearly he has a financial penchant.

The book stops in the late 80's - so you can only wish for an updated view of the merger with Chase Bank and the role of the bank in the Great Recession and its current compliance problems. Ron, how about an update??

Robert ‘Bob’ Macespera
4.0 out of 5 stars A very good book, even if its subject fails us half way
Reviewed in the United Kingdom on August 29, 2019
Verified Purchase
This is a very good book which deals with one of the most interesting periods of history: how the United States changed in the last 25 years of the XIX Century to become the industrial and financial centre of the world. It was the time of the "private bankers", of creation of fortunes, of yatchs and expeditions to Egypt, of houses with 140 rooms, of family dinasties, of bankers subject to "gentlemen codes", of names that became associated (forever) with money and power - Rockefeller, Vandebilt, Carnegie and, of course, Morgan.
The first two thirds of the book tell the history of the Anglo-American bank and how power shifted slowly yet unstoppably from London to New York. It is the story of the two Morgans: Pierpont and his son Jack. This is by far the core of the book and the best of it. It is a fascinating story leading the reader through the days when the rules where made to cope with the progress and the accumulation of wealth. This is the time of the trains and steel industries, of buildings and investments of a size not conceived, let alone tried, only a mere two decades before. It was the classic age of capitalism and New York was its Athens.
The last third of the book, roughly after the death of Jack Morgan and the end of WWII is far less interesting. The bank becomes only one more in an ocean of entities and the Directors are now mere plebeians who must compete fiercely for a piece of the market. The Guinness scandal in the 1980s is only a sad epitaph for an era long gone.
The book's prose is very good and, even at 700 plus pages, it grasps us and doesn't seem that long. In some parts we want to get deeper. However, towards the end it is boring because we do not care anymore. The Morgans are gone and other names and people we neither know nor care step in. Then come the merges, the globalisation and another Century.
The bank is still big, the aura is long gone. There's virtually nothing to tell.

na
5.0 out of 5 stars 10/10 Book. The writing style is amazing.
Reviewed in the United Kingdom on November 6, 2016
Verified Purchase
This book is in my top 10 books ever read. It will most definitely remain in there, I cannot recommend this book enough. However, prepare yourself for a long read, it is very dense and slow to grasp. But all in all 10/10
Read more
One person found this helpful
Report abuse

Francis Charters
4.0 out of 5 stars A good read.
Reviewed in the United Kingdom on May 20, 2016
Verified Purchase
This book has been very well researched . It is what it says on the title, all about the whole banking house of Morgan which today is Morgan Stanley banking. A good read.
Read more
One person found this helpful
Report abuse

Christian
5.0 out of 5 stars Five Stars
Reviewed in the United Kingdom on March 14, 2018
Verified Purchase
Great read can be heavy at times but absolutely fascinating. Incredible just how much power these lot held
Read more
2 people found this helpful
Report abuse

BroncoWarrior
5.0 out of 5 stars Excellent
Reviewed in the United Kingdom on August 5, 2015
Verified Purchase
This book is superb if you have any interest in financial history. A lot of what happened in the early 20th century mimics the howlers of banks during the crisis. Brilliantly written.
Read more
One person found this helpful
Report abuse
See all reviews