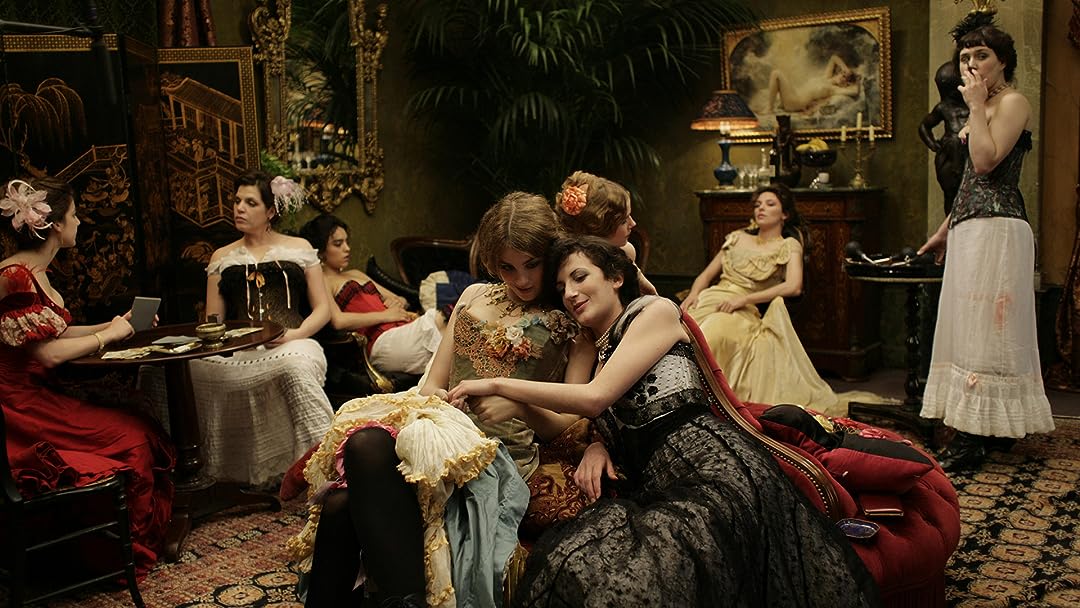 (423)
6.72 h 5 min2011X-Ray18+
A highly cinematic and atmospheric look at the final days of a turn of the century brothel when much of the Parisian sex trade was confined to grand maisons, populated by elegant madams and vetted clientele and Xavier Beauvois.

IreneReviewed in the United States on November 19, 2019
5.0 out of 5 stars
Great Film
Verified purchase
If you are into fast-paced, easy to understand films. Stop right there. Go back and watch a simple to understand American film. If want is a slow-paced, exquisite film about the truth of brothels and prostitution, then by all means continue. This isn't a feminist film in the context of women defying historical convention and acting like modern day heroines when in fact during that time we could not be. It is about women that escape their life for whatever the reason it was, to work and in-debt themselves to a brothel; their clientele, and their camaraderie at all being together faced with the same situation. It's not peaches, nor it is happy, this isn't a film where they all end up married and have kids, or where they become something grandeur. This is the truth of what working in a brothel was like during that era. You weren't independent, nor were you free, you had to work to pay your debts, your keep, and you had to sleep with people you otherwise wouldn't have. That is the truth. Like it or not, that is how it used to be.

This isn't a film for kids. I would even say that if you are in your 20s and you love DC Comics still and all those Hollywood films, skip this one. This one needs more of an intellectual brain than Hollywood films.

Yes, there is a lot of nudity. I personally would have liked to have more men nude as well. But given the topic I didn't really think they wouldn't have nudity. And given the French films I've watched, I'm already accustomed to this.

Dorian M.Reviewed in the United States on August 4, 2020
4.0 out of 5 stars
The Claustrophobia of Reality
Verified purchase
As expected, this film is enlightening, disturbing, and tragic.

A lengthy film that follows the lives of a handful of prostitutes in a Maison Close (bordello/brothel) in turn of the century Paris, before the beginning of the end of such houses of pleasures. A film full of fetishes, feelings, and the female perspective, it portrays the whims of men and the havoc it can wreck on women's lives in this line of profession. Women's choices were few: wives, laundresses, seamstresses, maids, cooks, or prostitutes.

It's not for everyone, but if you have interest in turn-of-the-century life that's not so pretty and picturesque as most period dramas, watch this.

samadhi-sanReviewed in the United States on October 8, 2021
1.0 out of 5 stars
DISGUSTING
Verified purchase
Relatively early in this film, one of the prime characters has her mouth slit open at the sides by a disturbed patron. She continues to play a relevant role in the rest of the film. Truly horrific, truly disgusting. Could have been a five-star production based on the contained female nudity,, this unnecessary gruesomeness has ruined an otherwise splendid production.

John PReviewed in the United States on February 17, 2014
4.0 out of 5 stars
A very good movie
Verified purchase
Despite some lukewarm reviews here on Amazon, this is quite good. It seems to have been dumped into the B-movie bin by Amazon (based on the recommendations that show up underneath it), but it shouldn't have been there.

Beautifully filmed and well acted, this is something like the Upstairs Downstairs of a group of women who were forgotten while they were still alive. It avoids the easy moralizing blah, blah, blah often found in American movies on the subject, while at the same time cutting deeper to show the unfair, dangerous and precarious existence of a whole class of women. One of the more poignant scenes is one in which a self-styled intellectual lends one of the women a copy of a "scientific" study that shows that prostitutes are an inferior, criminal class, perfectly consistent with the racist eugenicist culture of the times. It makes one want to sic Diamanda Galás on his ass.

Don't be fooled by the dreck that shows up related to this picture. It is a real movie about real people.
6 people found this helpful

Hannah HamiltonReviewed in the United States on May 30, 2014
4.0 out of 5 stars
strangely easy to watch
Verified purchase
*SPOILER ALERT, SERIOUSLY, TAKE HEED*

It's gotta be hard to cry come, but, granted, it's probably also difficult to live as a sex worker at the turn of the century when safe sex could hardly be assured. The film pulls no punches: one of the girls we follow arrives at the brothel at fifteen, looking for work, and ultimately ends up leaving before she can accumulate any debt. Debt, you ask? Why, yes, debt. Because that's what's tying many of the women to their business after five or ten years in the business, spending money on loan from the brothel's Madame to buy perfumes and costumes and all manner of things to be successful at their job.

The women seek comfort in each other and wear their most intimate expressions when speaking to what amounts to their sisters-mothers-friends-coworkers--they are all of this to each other. This film is full of miserable women who don't want to stay, but are so seemingly insular that they are scared to go. You could almost call this an office drama because despite the constant emotional turmoil churning in nearly all the women, they are clearly professionals and put aside their troubles when doing their jobs.

Among the most sympathetic characters is the Woman Who Laughs, given a Glasgow grin by an insidious regular of hers. Formerly known as the Jewess, the Woman opens the movie for us as we watch her being maimed. She's out of sight for a while before re-entering the film, seemingly fallen from grace, long jagged scars running up both cheeks. She lives in the place where she became a victim, cooking and doing the laundry mostly. It's appalling, how quietly she stays and does her share to contribute to her small community, but you get the sense the other women don't mind her appearance as much as outsiders would--and do, by the end of the film--sensationalize it.

The brothel is going under, no longer able to sustain the same clientele and you know it's one of the last of its kind. It makes you worry and hope for the women inside it. It makes you hope, perhaps futilely, that they find much more purpose and happiness outside its walls than within them.
13 people found this helpful

Andreas TaggerReviewed in the United States on July 29, 2018
1.0 out of 5 stars
Girls cut up like harley quinn batman joker
Verified purchase
A french forward film with a serious slant against women. Tons of nude ladies with maybe one frontal nudity scene of a male. Girls cut up like harley quinn batman joker, body horror disease and owing money to madam, or largely economic withdrraw from men. Director studies museums to learn how to light women in his study. Great film to realize why things are so bad now.
One person found this helpful

KGReviewed in the United States on November 11, 2014
5.0 out of 5 stars
Poetic, unique, sad and haunting film - don't be mislead by the title and cover
Verified purchase
This takes place in a Paris brothel just before and just after the start of the 20th century. While there is a lot of nudity and sex, the film is almost always anti-erotic, as it is so clear that the women are less than enthusiastic participants. Interestingly, I found the only moments with any erotic charge were moments between the women themselves, who support each other in what amounts to indentured servitude. Occasionally we feel the heat of human connection between them in a look, a touch, and that is far more sensual than anything they share with their clients, which is often degrading, and occasionally violent.

The film is a look at the trap poor women found themselves in, when being a prostitute was one of the only ways to make your own money, and other professions had just as many drawbacks (one woman speaks of giving up being a washer-woman because her lungs were becoming damaged from breathing ammonia all day). But the irony is, the 'expenses' of being a well kept prostitute (from room and board to perfume) are more than the women can take in, so they inevitably fall deeper and deeper into debt. Like sharecroppers, they soon 'owe their soul to the company store'.

This isn't a naturalistic film in the usual sense. It jumps around in time - something we sometimes only realize because we'll see a moment we'd watched earlier happen a second time, but in this case from a new perspective or in a new context. It's 'slow' by our usual standards, and is less about plot than about captured moments that build to something larger. It also uses anachronistic, modern music to great effect. But for all it's intentional artifice, there is a feeling of an honest sort of hyper-reality here. In the same way a poem can capture the feeling of a sunny day better than a lot of scientific explanation, so too does this poetic film capture a complex and sad world in a way that lets you feel a sense of understanding and empathy more than straight forward naturalism might.

The film-making itself is of a very high order. The cinematography and acting are both first rate, and there is a sequence near the end that combined acting, images and music to give me chills in the rare way sequences by great film-makers can sometimes do. Not every choice works, but this is a bold, challenging and emotional film. It doesn't tell you what to think, it just creates a world, invites you inside and allows you to draw your own conclusions. I suspect I will get even more from it on a second viewing.
6 people found this helpful

N. TrimbathReviewed in the United States on April 19, 2014
5.0 out of 5 stars
I don't understand the low reviews.
Verified purchase
I suspect people were expecting a whore movie based on the viewpoint of the johns and not sympathetic to the humanity of the women. I think this movie's pace is different than what people are used to but it made for a more thought provoking involvement - like you are there with them. I love this film. I love how it shows the bonds of friendship and affection that women in such situations form and the real dangers they faced. This is not a titillating whore movie - it is a look at the lives of women with an eye for their authenticity.
5 people found this helpful
See all reviews
Back to top
Get to Know Us
Make Money with Us
Amazon Payment Products
Let Us Help You
EnglishChoose a language for shopping. United StatesChoose a country/region for shopping.
© 1996-2022, Amazon.com, Inc. or its affiliates