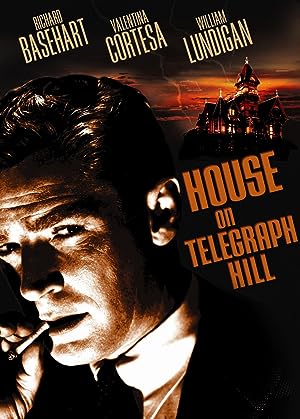 The House On Telegraph Hill

(256)
6.91 h 33 min195113+
House On Telegraph Hill is an intriguing cliffhanger set in a spooky Victorian mansion below Coit Tower in San Francisco.

Jeanette RockReviewed in the United States on July 31, 2022
5.0 out of 5 stars
Great Noir film
Verified purchase
Good movie. Disc is in good shape. No problems.
One person found this helpful

KwillReviewed in the United States on June 6, 2006
4.0 out of 5 stars
Rebecca's gaslight suspicions revisited (recommended)
Verified purchase
This is a reminder of man's inhumanity and the suffering caused in WWII. When one has lost all family and personal possessions, desperation can move one to take liberties with the truth for survival's sake. But what is one to do when such deception has been trumped by the people living in one's own HOUSE ON TELEGRAPH HILL? With a torturous concentration camp background, it is plausible that others may be easily convinced that the immigrant is cracking up. When help is needed, who can be trusted while personally living a lie in a new country?

The viewer sees events through the eyes of the immigrant Victoria Kowelska (Valentina Cortese). Following a bit of early over-dramatization in the concentration camp, Victoria assumes the identity of a wealthy benefactor named Karen. After her marriage to Alan (Richard Basehart), Karen/Victoria attempts to prove a murderous cover-up is taking place and her own life is in danger. At the same time, others are either trying to make her believe that everything is normal or that she is delusional.

Mrs. Danvers' contempt in [[ASIN:B00000K0EG REBECCA]], the "murderous" attempts in [[ASIN:B0002HOEOY SUSPICION]], and the effort to convince Paula she was going insane in [[ASIN:B00011D1PE GASLIGHT]] find corresponding scenes in HOUSE ON TELEGRAPH HILL. As events unfold, subtle twists may catch you off guard but the history of prior classics may render some conclusions obvious. Nevertheless, the presentation does not borrow to such an extent to make it a rehash. It is more like a tribute to favored classics with sufficient new settings for a good degree of suspense.

I do have some minor criticisms. A few unresolved scenes, like the reaction to obvious scrapbook tampering and why evidence of an explosion remains for years, are left to the viewer's imagination and logic. Deathbed confessions in closing scenes attempt to sew up most loose ends. Major Marc Bennett (William Lundigan) seems too friendly too quickly and appears nonchalant about every twisted development.

Film transfer is very good but not great. (Specs and occasional posterization/pixelization in dark tones.) With these factors and the aforementioned plot borrowing I deduct a star from an otherwise entertaining suspense movie.

Movie quote: "I make no excuse. I felt Alan was attracted to me and I was prepared to take advantage of it."

TerryReviewed in the United States on January 8, 2022
5.0 out of 5 stars
Excellent movie
Verified purchase
Very good drama. I love these old movies, such good plots. I am a lover of those enormous victorian homes and this house was so elegant. So many were destroyed in the 1906 Earthquake in San francisco. I wonder if this house still stands.
2 people found this helpful

DanReviewed in the United States on June 17, 2021
4.0 out of 5 stars
Thrilling
Verified purchase
This noir steps out of the usual sex and whiskey smoky San Francisco setting and uses a family based setting. But its even more chilling because of that.
One person found this helpful

AwlwazReadinReviewed in the United States on March 9, 2015
4.0 out of 5 stars
Another good film from times gone by.
Verified purchase
Great old black and white with wonderful scenes taking place in the Telegraph Hill area of San Franscisco. If you saw and loved Gaslight or the movie Suspision than you will most likely love this film too. Acting is very good, especially Valentina Cortese. This was nominated for an Oscar for best art direction. If you want to read some interesting stories about this film go to IMDb user reviews. There is an interesting review from a man who was there at the the time this movie was on the big screen and another from a gentleman who was actually in the movie when he was a tiny baby being carried by his parents onto a ship in one of the scrnes. I love so many of the old film noir movies and find it hard to track down newer movies that I find as brave or as good as most of those made from the silent films to the late 60's. This movie is good thriller and has a little bit of everything to keep it interesting right to the end.
14 people found this helpful

ShazbotReviewed in the United States on December 31, 2020
4.0 out of 5 stars
Ominous, but not spooky
Verified purchase
A good flick from the 50s, especially if you like noir, and seeing San Francisco as it used to be.
One person found this helpful

SwissangelReviewed in the United States on September 6, 2011
4.0 out of 5 stars
Very interesting Film-Noir
Verified purchase
House on Telegraph Hill with Richard Basehart, Valentina Cortese, and handsome looking William Lundigan is a early interessting and also thrilling movie about a woman, played by Valentina Cortese (still living in september 2011), where takes a identity of another woman in a concentration camp in WW2.

Director of this film noir is Robert Wise where became famous for directing THE musical "West Side Story" and later in 1979 "Star Trek - The movie".

Photo Gallery (scenes from the movie, behind the scenes, portraits)

Mad CollectorReviewed in the United States on April 2, 2006
4.0 out of 5 stars
This house stands the test of time...
Verified purchase
Having recently discovered the genre of film noir, I decided to give this film a gamble. Knowing Robert Wise's work, I imagined it would be a respectable accomplishment. Upon viewing it, this was proven true not only directorally, but as well with set design and acting. At times, I thought I knew where the film was going, only to be directed down a new path that I hadn't expected. The locations in San Francisco make it a great film for anyone who has left their "heart" there. And having been co-scripted by Frank Partos of "The Uninvited", I knew I was in for a treat.
4 people found this helpful
See all reviews
Back to top
Get to Know Us
Make Money with Us
Amazon Payment Products
Let Us Help You
EnglishChoose a language for shopping. United StatesChoose a country/region for shopping.
© 1996-2022, Amazon.com, Inc. or its affiliates