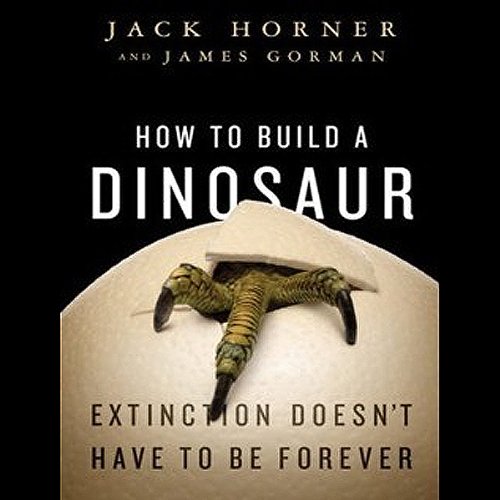 How to Build a Dinosaur: Extinction Doesn't Have to Be Forever

List Price: $17.49
You Save: $2.54 (15%)
By completing your purchase, you agree to Audible’s Conditions Of Use
Sold and delivered by Audible, an Amazon company
Share

4.6 out of 5 stars
4.6 out of 5
117 global ratings
How are ratings calculated?
To calculate the overall star rating and percentage breakdown by star, we don’t use a simple average. Instead, our system considers things like how recent a review is and if the reviewer bought the item on Amazon. It also analyzes reviews to verify trustworthiness.
Top reviews

Sumi's Books
4.0 out of 5 stars Great for a Brain Tickle
Reviewed in the United States on May 10, 2018
Verified Purchase
The book goes over the potential of how to make a dinosaur in this day and age and the theory of how to do so. The entire first portion of the book is a recount of the history of dinosaurs and their evolution thereof. The second part of the book pertains to gene manipulation concerning drugs versus master genes using chickens as a base genome example. The last portion of the book goes over the concise Evolution from bird to mammal and explores the theory of reversing evolution.
A great read if you can follow it. There is a lot of scientific verbiage that would be difficult for the layman do you understand. Very interesting theories and very entertaining overviews. Jack Horner takes you in depth in seeing just how close we are to creating the Chickenosaurus.
Read more
Helpful
Report abuse

S. Barnum
4.0 out of 5 stars Interesting read
Reviewed in the United States on November 5, 2015
Verified Purchase
I love dinosaurs, and I really enjoyed this book. The criticisms I have are that it was on the short side, it could have been better organized, and I feel that he was too focused on chickens. I have heard of other bird species retaining some primitive characteristics, for example (if I remember correctly) hoatzin chicks having claws on their wings. He doesn't mention anything like this, but I feel that he should have because it is relevant to his argument. Other than that I found it very interesting. When he talks about creating a dinosaur, it isn't what you expect. He also goes into some of the science, which I think is easier to understand if you have at least some science background.
Read more
One person found this helpful
Helpful
Report abuse

Dr. Lee D. Carlson
HALL OF FAME
5.0 out of 5 stars An awesome proposal
Reviewed in the United States on June 1, 2009
Verified Purchase
When reading the first half of this book, this reviewer found it difficult at first to connect its subject matter with the title of the book. The expectation was that the book was going one devoted to genetic and metabolic engineering as applied to embryology. Instead the authors devote the first half to matters of paleontology and the art of fossil hunting. Readers eager to learn how to "build a dinosaur" may therefore get impatient with the authors, and may be tempted to put the book down and not go further.

This would be a mistake, since in the latter half of the book the authors get down to explaining what kind of techniques or knowledge may be necessary to produce a creature that for all practical purposes, i.e. in terms of its skeletal structure and general appearance would be a living dinosaur. Studying these pages is fascinating, and indeed gives one more reason for believing that if the authors or other biologists succeed in bringing this about, then this would be the most awesome feat in scientific and technological history.

What is most important about the author's proposals is that they are not dependent on having the genomes of long extinct dinosaurs. Instead, they seek to adjust the timing of the growth patterns that led to the evolution of birds from nonavian dinosaurs. This is to be done via the embryo of a domestic chicken. But changing the timing of metabolic and growth processes, this timing being regulated by genes, must respect what actually occurred in the evolutionary development of the bird from the dinosaur. Otherwise what results is a kind of "freak" that may be of interest in general but will not represent a genuine dinosaur of the kind that roamed the earth millions of years ago.

A small amount of space is devoted in the book to the ethics and dangers of this kind of effort. These discussions are important but did not convince this reviewer that the author's proposals should not be carried out. On the contrary, they should be done immediately without any mental reservation. Right now. Today.
Read more
3 people found this helpful
Helpful
Report abuse

John
5.0 out of 5 stars Which came first the Park or the reality of reverse genetic engineering?
Reviewed in the United States on February 21, 2020
Verified Purchase
Great read for anyone wanting to take chickens back to their more ferocious days! I liked the way the research is passionately presented. A must have for biology teachers and Dino fans!
Read more
Helpful
Report abuse

algo41
4.0 out of 5 stars For five chapters, science writing at its best
Reviewed in the United States on March 23, 2010
Verified Purchase
The first 5 chapters of this book exemplify science writing at its best. There is the personal, but it always relates to the science, and is interesting besides. The chapters explain what we believe we know about dinosaurs and their evolution, the kinds of evidence, even what it is like collecting fossils; the chapters also discuss how a study of embryo development can cast light on evolution. Most amazing to me (p.108) is that there is sufficient collagen protein preserved in some dinosaur fossils that you can inject them into a rabbit, thereby generate antibodies, and these antibodies recognize the corresponding chicken protein.

The last two chapters are not at the same level. Horner is interested in promoting a grand experiment: modifying embryonic chicken development so that you create a creature with the features belonging to the chicken's non-avian dinosaur ancestors. There is a lot of developmental biology which must first be mastered to accomplish this. However, at the level of detail that Horner writes, there is just not enough to say to adequately fill the 50 pages devoted to the subject. As explained I couldn't fully appreciate the concept of symmetry, and Horner did not want to go into such topics as just how staining works in tracing embryo development.

Horner himself is a delightful man, careful to give credit where it is due, willing to tell some anecdotes which do not paint him in the best light, and willing to spend $40,000 of his own money to sponsor research he believes in! However, sometimes he seems to be implicitly assuming that it is only the control genes which mutate, so that just by modifying their signals you can creat a viable creature with dinosaur characteristics.
Read more
One person found this helpful
Helpful
Report abuse
See all reviews

Webley Hawk
3.0 out of 5 stars An Intriguing (unessesary) Idea.
Reviewed in the United Kingdom on January 16, 2018
Verified Purchase
This concise little book is effectively a research proposal written for a public audience. It comes across as Mr. Horner's defense of his plan to 'reverse engineer' a domestic chicken (Gallus gallus domesticus) embryo in order for it to express traits commonly associated with non-Avian theropod dinosauria. This book is marketed to the general reader, but the latter chapters which chronicle in minute detail the bio-chemical processes by which DNA and its associated compounds may be manipulated, are extremely jargon-heavy and dense, and likely to be largely lost on the lay-reader with no prior knowledge of genetics and biochemistry.
My overall impression on finishing the work could be summarized as: "Interesting, but, what's the point?". Mr. Horner theorises the possible subsidiary benefits to our understanding of hereditary diseases &c. as a foundation for the validity of creating a 'dinosaur', but one suspects these worthy spheres of research could be undertaken without the 'de-extinction' aspect. Nor would the animal resulting from such an experiment be a 'dinosaur' in the genuine sense, rather it would be a (theoretically sterile) pseudo-animal exhibiting artificially induced archaic physiological traits.
The pseudo-animal proposed by Mr. Horner would not be a dinosaur. It would be a domestic chicken expressing some physical traits from a prior stage of its evolutionary development congruent with the popular image of what a non-Avian theropod dinosaur might look like.
While an interesting idea which would undoubtedly thrill school children the world over, I'm afraid I fail to see any practical application for the project which would be of benefit to either our understanding of evolution (which Mr. Horner repeatedly and unnecessarily points out he considers superior to all other conceptions of life's origins) or any other application beneficial to the advancement of society which couldn't be achieved by other avenues of research which do not involve 'reverse engineering'.
Read more
One person found this helpful
Report abuse

max g fenning
5.0 out of 5 stars Another good book by another God auther
Reviewed in the United Kingdom on May 18, 2020
Verified Purchase
Not read it yet but should be good
Read more
Report abuse

Steven
5.0 out of 5 stars 21st Century Science!
Reviewed in the United Kingdom on April 13, 2013
Verified Purchase
Jack Horner really makes it feel like you are sitting next to him whilst he explains to you the processes in which he believe he can use to retroengineer a dinosaur from a chicken. He talks about cutting edge science and research that helps us understand the link between dinosaurs and birds and how they evolved. If you are interested in Natural History, then buy this book!
Read more
Report abuse

Blackrose
5.0 out of 5 stars Excellent.
Reviewed in the United Kingdom on June 12, 2012
Verified Purchase
What a wonderful book! Jack Horner has told me the chickenosaurus project is getting underway. He hopes he will be able to get the last remaining members he needs for his team.

I havnt finished this book yet but I must say it's a brilliant book. If you're a fan of dinosaurs, jack horner or the chickenosaurus project then this is for you.
Read more
One person found this helpful
Report abuse

Red Ochre
4.0 out of 5 stars Cutting-edge
Reviewed in the United Kingdom on January 20, 2015
Verified Purchase
Pacy and a fun read, and also very informative, with some of the latest discoveries and thinking - and some provocative speculation.
Read more
Report abuse
See all reviews
Back to top
Get to Know Us
Make Money with Us
Amazon Payment Products
Let Us Help You
EnglishChoose a language for shopping. United StatesChoose a country/region for shopping.
© 1996-2021, Amazon.com, Inc. or its affiliates