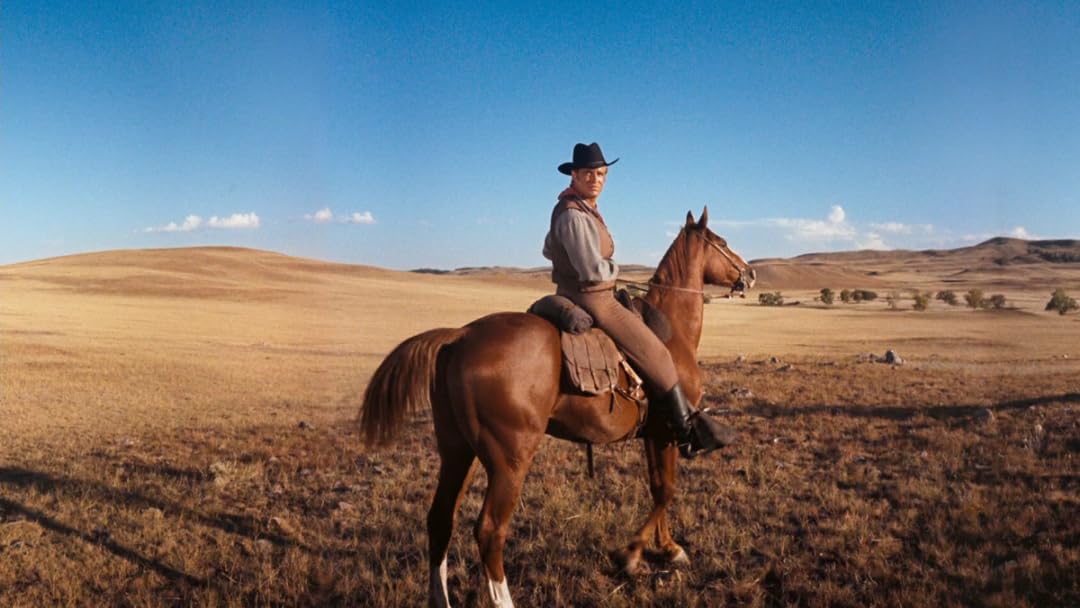 How the West Was Won

(4,110)
7.02 h 44 min1963G
Academy Award-winning epic follows the trials and tribulations of three generations of a frontier family as they embark to tame the wild American West.

Dr. GReviewed in the United States on July 30, 2022
5.0 out of 5 stars
Classic Remastered
Verified purchase
This one is definitely on my very short list of classic movies; especially with it’s all-star cast. My first copy of this video was in the DVD format with its pan and scan formatting, causing 2/3 of the movie to be lost from its original Cinerama 3-screen projection. My next copy was the “letter box” edition but on DVD, the movie itself was really small and there was an obvious seam between each of the original 3 screens. Now, with larger television screens and superior sound quality, this movie is a definite pleasure to watch, true to its original version. This version was engineered with minimal obvious separation between the original 3-screen format. And, the entire length of the original film was kept in tact and not shortened like the DVD formats were. This is one that belongs in your classic movie collection.
3 people found this helpful

TrelamaReviewed in the United States on September 21, 2022
5.0 out of 5 stars
Oldie but goodie
Verified purchase
I watched this movie while vacationing in Oatman AZ, to see the scenes shot there, very good, highly recommend

J. HenryReviewed in the United States on May 22, 2022
5.0 out of 5 stars
Great old movie - So much better than the old DVD version
Verified purchase
This Blu-ray version of "How the West Was Won" Is so much better then the old DVD version I had. That one had three distinct areas of the picture and terrible transitions between them. This Blu-ray offering has two different versions of the film, on two Blu-ray discs. The first is a super wide screen version. It is sharp and has vivid color. The second version is a surprise. It has a curve screen that is much taller at the edges than in the middle. We tried both, and settled on the wide screen version..... Then we switched. The curved screen seems to capture the movie better, and gives a 3D like feeling to it. We switched back and forth several times, and settled on the curved version. We have a 65 inch 4K TV, and it looked great. On a smaller screen, I don't think the curved version would work that well. Audio is crisp and clear, played through my 5.1 AVR.

As for the movie itself, it is an old classic that I've loved for many years. It has a great lineup of stars. It is dated, but that is to be expected. It tells a great story of the settling of the old west. If you are a fan of older western movies, this is a nice addition.

Jerry FlackReviewed in the United States on June 11, 2022
4.0 out of 5 stars
A Classic...But
Verified purchase
How The West Was Won first appeared in the late 1950s as a series of stories in Life Magazine when is was a great magazine. The movie is long but the interconnected story lines give Debbie Reynolds and Carroll Baker roles that they play superbly. The scenery and music are terrific. Incredibly, the film segments placed together make a super long movie which had three directors including the legendary John Ford. My problem is that the version I purchased is apparently available only in widescreen format. This greatly diminishes the exceptional beauty of the movie's most scenic moments. A full screen version would give the film the majesty it deserves. The viewer mostly sees the Rocky Mountains and other national treasures surrounded by black spaces. The actual film occupies not more than about one third of my TV screen.

ta taReviewed in the United States on September 4, 2022
5.0 out of 5 stars
fast shipping
Verified purchase
Thanks.

Carl BrownReviewed in the United States on August 26, 2022
5.0 out of 5 stars
movie
Verified purchase
it was what i wanted.

Benjamin J BurgraffReviewed in the United States on September 15, 2008
5.0 out of 5 stars
Superb Remastering Job and Audio Commentary Highlight Edition...
Verified purchase
If you've avoided purchasing 'Cinerama'-formatted widescreen DVDs in the past (because of the irritating lines indicating each camera, and often blurry images), you're in for a treat; "How the West Was Won (Ultimate Collector's Edition)" has all but removed the lines, and restored the depth of detail, richness of color, and superb stereophonic sound lacking in every previous edition. Add to this one of the most entertaining, informative Audio Commentary tracks I've ever listened to, and you have a DVD that is truly worth owning!

Taking a moment to reflect on the Commentary...I am disappointed that no 'Making of...' video has been made, as "How the West Was Won", with it's stellar cast, legendary directors, and massive production, certainly deserves one. But the Audio Commentary makes a sincere effort to make up for it, offering information on the locations, how the extraordinary shots were created, and backstories about casting and the production. A surprising bit of HTWWW trivia: Did you know that Bing Crosby was originally slated to narrate the film, with Spencer Tracy to portray Ulysses S. Grant? (The reason Tracy switched to narrating isn't explained in the Commentary, but I am familiar with what happened; Tracy collapsed at his home, prior to filming, and had to be rushed by ambulance to the UCLA Hospital; under doctor's orders to rest, he was unable to perform in a role, but still wanted to participate in some manner, so Crosby, graciously, gave up the narration to him). A health issue created another change, as well; Dimitri Tiomkin, the contracted composer of the musical score, broke his leg, and had to be replaced by Alfred Newman, who did a magnificent job. Another surprising fact: Hope Lange was originally cast to play George Peppard's wife, with a long subplot revealing she was Henry Fonda's daughter, first seen working as a showgirl at the railroad camp, where she was courted by both Peppard and Richard Widmark. Despite some scenes being filmed, it was decided the subplot took too much time from the main storyline, so her scenes were cut, and reshot to remove any reference to her, with Carolyn Jones cast in a far shorter version of her role, for the final sequence of the film.

Much more is included in the Commentary, which really encourages a viewer to watch the film at least twice!

The third DVD in the collection (the first two discs are of the film, itself), is devoted to a long history of the Cinerama process, from it's roots during the silent era, it's value during WWII as a training tool, the spectacular, and once, tragic, Cinerama travelogues, through the decision to scrap the 'three-camera' process in favor of a less difficult 70mm 'single-camera' process (HTWWW would be the last film using the original format), and it's ultimate demise, in favor of less costly formats. As someone whose first Cinerama experience was the 'single-camera' "2001: A Space Odyssey", the documentary makes me wish I'd experienced the superior 'three-camera' films, with full stereophonic sound, on a giant curved screen!

Lots of reproductions of original release promotional materials are included in the package, as well, which are fun to browse through, while you're watching the film.

Entertaining, educational, fun..."How the West Was Won (Ultimate Collector's Edition)" is all this, and MUCH more!

Roy BautistaReviewed in the United States on July 15, 2022
5.0 out of 5 stars
One of the best western movies
Verified purchase
I am collecting good old wedtern movies
See all reviews
Back to top
Get to Know Us
Make Money with Us
Amazon Payment Products
Let Us Help You
EnglishChoose a language for shopping. United StatesChoose a country/region for shopping.
© 1996-2022, Amazon.com, Inc. or its affiliates