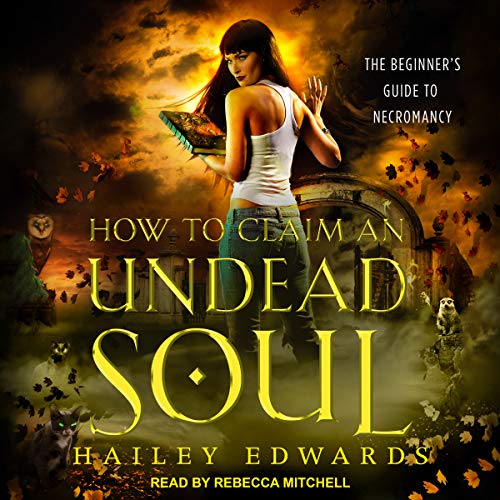 How to Claim an Undead Soul: Beginner's Guide to Necromancy Series, Book 2

Life was simpler for Grier when she was flat broke and a social pariah. Now she's carrying the baggage that goes along with the title of Dame Woolworth, and shouldering that weight is giving her a serious crick in the neck. Her work as a Haint is the one thing that makes her feel normal, but even that's more paranormal than usual.

Spirits are vanishing from well-known hot spots on the ghost tour circuit, and vampires are turning up as shriveled husks. Grier takes it upon herself to uncover what's preying on Savannah's supernatural community, and what she uncovers is bigger than a few flickering lampposts gone dark. It's a deadly threat unleashed by one of their own, and saving her city just might kill her.

4.6 out of 5 stars
4.6 out of 5
564 global ratings
How are ratings calculated?
To calculate the overall star rating and percentage breakdown by star, we don’t use a simple average. Instead, our system considers things like how recent a review is and if the reviewer bought the item on Amazon. It also analyzes reviews to verify trustworthiness.
Top reviews

Rambling Reader
5.0 out of 5 stars New mystery, new drama, new love interest (?!)
Reviewed in the United States on January 7, 2018
Verified Purchase
When we last left Grier, she was dealing with the aftermath of her kidnapping and had been assigned an unwanted teacher/babysitter/spy of the Grand Dame's.

As Grier is left having to pick up the pieces again (poor girl can't catch a break), she also has to figure out how to move forward with Linus, her "cousin" (her deceased-guardian's nephew) and teacher. Even though he's supposed to fill in the gaps of her magical and necromantic knowledge, she has to figure out if she can really trust him, be vulnerable with him. Is he more than his mother's spy?

Boaz and Amelie stick with Grier in this follow-up, and we get to see a bit more of Neely as well. While Boaz and Grier's relationship progresses, it seems like Amelie and Grier's friendship is a bit stuck. Throughout the story there seems to be a bit more tension and, like Grier, the reader can't be too sure of the source. Many times it seems like Amelie's bitterness and helpless at her Low Society ranking is rearing its ugly head, but it turns out to be much more than that.

Edwards also adds something that I think hooks many readers in- the prospect of a love triangle. Although Boaz seems to finally be awake and realizing that Grier is truly who he wants in his life as not only a friend but a romantic partner, we start to see a competitor possibly rising up.

Although Grier remembers Linus as a solemn child, studious and not full of much personality, he has grown up in their time apart. He's complicated, intelligent, and maybe even a little dangerous. Honestly, I loved his character. I think that he's got his fair share of trouble to deal with (with a mother like his, who wouldn't?), but he seems to have an honest affection for Grier, and she sees a side of him that others don't get to.

In the midst of the personal drama and story movement, there's also a mystery. Ghosts seem to be disappearing, and no one knows why. As she readjusts to her post-kidnapping life, Grier starts to get caught up in the mystery that winds up touching everyone that she's included in her little family.
Read more
5 people found this helpful
Helpful
Report abuse

Theresa
4.0 out of 5 stars Hmm... Linus, yep that is all I have to say... Linus...
Reviewed in the United States on February 10, 2019
Verified Purchase
4.5 Stars... Being the Woolworth heir is certainly having it's challenges... Grier must learn both the extent of her powers as well as control over them; Mr. Linus Andrea Lawson III is just what the doctor ordered, or in this case, the teacher... A sexy, smart, mysterious teacher who seems to know all the ins and out of... the necromantic world... But all is not what it seems and the mystery amps up as ghosts begin disappearing, literally, from the haunted Savannah, Georgia landscape... Grier gets pulled into the mix and must learn to utilize her talents in order to save the innocent while attempting to save herself... Add in a "does not take no for an answer" charming bad boy / love of Grier's life and her world seems to get more and more interesting... However, one act of betrayal could end all that she holds dear... A fast paced, funny, sexy, magical read that I thoroughly enjoyed:)
Read more
2 people found this helpful
Helpful
Report abuse

Book 1 has flawlessly moved into book 2. Grier has been reinstated as Dame Woolworth, but the five years at Atramentous, the prison she was thrown into when she was just 16 years old, have left deep scars. Waking up from nightmares every night (Necromancers have a different night/day rhythm).

Linus has moved into the carriage house of Woolly (Grier's sentient house) and has started teaching Grier on her magic and how to restore the wards of Woolly. She has started to trust him, but trust is hard for Grier, especially after all that has happened. I loved how she named Linus' wraith and her grimoire. Even though she has her fortune back, Grier still wants her job as a Haint back because she needs the normalcy and stability but it is hard getting your job back after you skipped out and can't explain your human boss it was because of a kidnapping. Her friend Amelie also points out several 'haunts' have lost their.. well.. haunt. It sets the stage for a mystery that is solved in this book and brings Grier more hurt and pain.

And what about Boaz, her lifelong crush, who finally asks her out? Grier is careful with her heart, and maybe that is for the best. I was a bit torn between cocky Boaz - who has his soft side for Grier and his sister - and Linus. Linus, who is the son of the Grande Dame and might be her enemy, but who shows signs of being quite taken with Grier. We get to know him a lot better in this book but there are secrets he will not (yet?) reveal.

I enjoyed the careful structured story and can't wait for the next. Grier is a wonderful heroine. So young, so deeply hurt and lonely. The High Society of the necromancers seems harsh and unescapable. On to the next!
Read more
One person found this helpful
Helpful
Report abuse

samoapheonix
4.0 out of 5 stars Romance, mystery and magic
Reviewed in the United States on July 19, 2021
Verified Purchase
4.5 stars rounded down to 4.
This series is shaping up to be a really unique take on urban fantasy, with an enjoyable lead character. Grier Woolworth has learned at least one big secret from her past--she is actually an extremely powerful necromancer, when her guardian had led her and everyone else to believe she had very little power. Grier desperately needs a teacher, but she doesn't trust the one assigned to her by the governing body of necromancers. Grier's love life is also in turmoil, as the man she has had a crush on most of her life (Boaz, the boy next door and her best friend's brother) is finally interested in her back but thanks to magical politics a relationship between them would be on shaky ground.
And there's something destroying the various ghosts haunting Savannah, impacting Grier's job as a ghost tour guide.
Lots of plot threads woven together--romance, mystery, magic, this book has it all.
Read more
Helpful
Report abuse
See all reviews

Melissa Tovgaard
5.0 out of 5 stars Wow
Reviewed in the United Kingdom on September 15, 2018
Verified Purchase
This series is sooo good. I love the characters, the world they live in and all that they get up to. Mystery, a little romance contained within a fabulously well written story. I’ve binge bought the whole series 🤗
Read more
Report abuse

Smileyrie
5.0 out of 5 stars Twisting & turning
Reviewed in Australia on September 30, 2021
Verified Purchase
You won’t see this coming! Spirit energy disappearing, a little boy ghost becoming a vicious poltergeist, Grier floundering in her new normal, trying to figure out who is a friend & who a foe… just when you think it’s all sorted, someone shakes up the snow globe & everything changes.
Read more
Report abuse
See all reviews
Back to top
Get to Know Us
Make Money with Us
Amazon Payment Products
Let Us Help You
EnglishChoose a language for shopping. United StatesChoose a country/region for shopping.
© 1996-2021, Amazon.com, Inc. or its affiliates