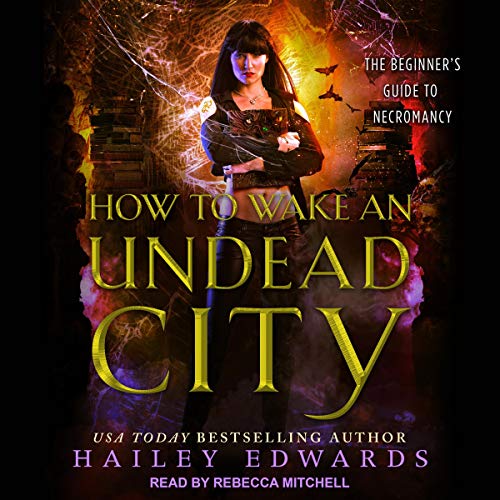 How to Wake an Undead City: Beginner's Guide to Necromancy, Book 6

4.8 out of 5 stars
4.8 out of 5
410 global ratings
How are ratings calculated?
To calculate the overall star rating and percentage breakdown by star, we don’t use a simple average. Instead, our system considers things like how recent a review is and if the reviewer bought the item on Amazon. It also analyzes reviews to verify trustworthiness.
Top reviews

Jen (Red Hot Books)
5.0 out of 5 stars Totally satisfied
Reviewed in the United States on May 29, 2019
Verified Purchase
I didn't know this was going to be the last full length book in this series until the day it came out and I'm both happy and sad about the news. Of course, I am sad because I have loved these books so much that part of me wants them to go on forever. But I'm happy to see Hailey Edwards wrap things up in such fantastic and unexpected ways.

This is the big showdown between Grier and her vampire grandfather. But it's so much more than that. It's a continuation of her love story with Linus. It's a resolution to her journey with Boaz and Amelie. Questions from the past are answered. And so are questions about the future. (Like how are Grier and Linus going to make it work with their ties to two different cities??)

I don't want to spoil too much, but this book made me cry. It made me cheer. And it satisfied me in every way. I'm so excited about the novellas to take me through more of this HEA.

Would rec this series for fans of urban fantasy, especially if you enjoy a swoon-worthy love story woven in.
Read more
14 people found this helpful
Helpful
Report abuse

Renee S.
5.0 out of 5 stars What an ending to the series!
Reviewed in the United States on June 9, 2019
Verified Purchase
Looking back, I think I fell in love with this series with the second book. Not surprising, that’s also when Linus really entered the equation. During this series, we saw Grier get her heartbroken by Boaz, get betrayed by Amelie, and find something steady and wonderful in Linus. On top of all this, she also had new powers to figure out, a few new enemies thanks to those powers, and some PTSD to round it out. Yet, Grier with Linus at her side took it all on plus some.

So the sixth and final book of this series had a whole lot of story lines to wrap up and a few enemies to defeat. Here to say, this book delivered!

Last we left Grier, the master had made his move on Savannah, Grier and Linus were finally together, and she was struggling with how to understand her powers enough to beat the master.

I loved how this book progressed because it allowed us to see that in order to beat her enemies, first she had to beat her worst one - her own fear. This wasn’t something a spell or Linus or even Boaz could do for her. Simply, she had to do this to have any hope of saving Savannah and her beloved Woolly - not to mention all the people she loved who lived in Savannah.

My only suggestion to you is this - block out a nice chunk of time to read this because trust me, once you start, you’ll want to finish it in one go.

I’ll miss reading about Grier and Linus but sounds like there’s a spin off featuring Amalie so maybe we’ll get to see those two once in a while.

Angela @ Angel's Guilty Pleasures
5.0 out of 5 stars I'm satisfied with the end of TBGTN series. Wonderful read!
Reviewed in the United States on September 4, 2019
Verified Purchase
I was no longer helpless Old Grier. I was New Grier, and she was fierce. - 58%

The end has come for The Beginner’s Guide to Necromancy. I’m sad to say goodbye to Savannah, Grier and company. It’s been a roller coaster ride of emotions and surprises.

When we left Grier and company, Savannah had fallen into the vampires hands.

In How to Wake an Undead City we finally get answers to questions, surprises that I didn’t see coming, and we see Greir come into her own. She still has a lot to learn, but with the help of friends and Linus at her side she’ll finally become what she was meant to be.

Edwards has a way of making you feel and care for all her characters from new to old. We see a resolution regarding Amelie and Boaz. I’m happy and grateful to have that done. And very pleased with how Grier dealt with both brother and sister. I was pleased to see how Linus and Grier’s relationship developed and how they plan to stay together. The author also treats use to battles mixed among moments of life. Last, we have a deadly vampire to stop. The ending delivered some unexpected twist and surprises. I was captured from begging to end!

This final novel answered questions, complemented the characters, and gave us closure, but also left the doors open for revisits. It also delivered the perfect setup for the spinoff series that begins with Shadow of Doubt. I’m happy and pleased with how The Beginner’s Guide to Necromancy series ends.

Barbara Elness
5.0 out of 5 stars Conclusion to a Fantastic Series!
Reviewed in the United States on June 8, 2019
Verified Purchase
The final book in a fantastic series, it was wonderful to see how it all wrapped up after everything that has happened, including the vampire takeover of Savannah. Of course a confrontation with her grandfather was expected, but there was so much more that Grier had to face, many lessons to be learned and decisions to be made. She wants to protect everyone she holds dear, including her city. Questions were answered, relationships strengthened or dealt with - including her mother’s and father’s family, and Grier makes those decisions about her future that will give her joy and fulfillment. I love how strong Grier is, and how she knows she can rely on Linus and her friends to always have her back and support her in what she knows she must do, whether they agree or not. The humor brightens what was sometimes dark and threatening, especially Lethe’s eating everything in sight during her pregnancy and Grier’s banter with Linus. In the end, I was very happy with how things turned out and I’m excited to learn there is a series of novellas planned as well as a spinoff series to come in the future.
Read more
3 people found this helpful
Helpful
Report abuse

C. Nor
3.0 out of 5 stars Excellent series though this is the weakest book in it.
Reviewed in the United States on June 1, 2019
Verified Purchase
Something was missing in this final book of an excellent series. I thought it might be passion lacking between the two mc's, though certainly theres a lot of love there. But that wasn't it. There does need to be more passion between the two of them but I think the main problem of the book is that the author lost her passion for the series. This book told the story of final confrontations and for the most part, they fell flat. This last entry lost its heart. Disappointing. But much gets resolved and the questions we've waited so long to have answered (who killed Maude and let Grier take the fall) are explained in full.
Read more
4 people found this helpful
Helpful
Report abuse
See all reviews

serendipity5
5.0 out of 5 stars Wonderfully satisfying
Reviewed in the United Kingdom on November 14, 2019
Verified Purchase
A fabulous end to a wonderful series, but the best bit is that we get to see these characters again soon. Grier and Linus are a united front and just about one the most endearing couples in urban fantasy right now! There is the little problem of vampires having taken Savannah (Grier's city) by siege. Keeping the general population and the she loves protected, saving the city, getting the bad guys and trying to learn all about her magic are all in a days work for Grier. Not without some cost, she comes up against barrier after barrier but yet she still grows stronger and stays true to herself. These books crept up on me on how wonderful they are, with characters that feel so incredibly real, I half expect to hear about the events on the news. A satisfying end, I can't wait to get stuck into stories from this world. Read this series!
Read more
Report abuse

Melissa Tovgaard
5.0 out of 5 stars End of the series, but not the end of the story
Reviewed in the United Kingdom on June 1, 2019
Verified Purchase
Book 6 in this beloved series did not disappoint. The story picks up from book 5 and dives into another epic tale. So many feels. I cannot say too much as I don’t want to be spoilery. There were answers, revelations and more drama for Grier and Linus... what else would you expect from our fabulous Hailey Edwards. If you haven’t picked this series up yet - why not? Do it NOW!
Read more
Report abuse

Kindle Customer
5.0 out of 5 stars A great take on vampires
Reviewed in the United Kingdom on June 8, 2019
Verified Purchase
This is another great book in the series. I love the author's take on vampires and magic. A fun read.
Read more
Report abuse

Jennifer J. Marr
5.0 out of 5 stars Awesome End to the series!
Reviewed in Canada on June 19, 2019
Verified Purchase
I love the continuing development of the characters that flows along with the more complicated plots. The story flows easily and is fun and I really enjoyed the romance between Grier and Linus. The set up for the next series - PoA was well done and saves a character that was well written and that I believe we all wanted to see winning. I like how the author didn't cozy her characters and make them all nice and really liked how she set them up, really, to get what they deserved. thank you for an awesome series! Looking forward to new tales!
Read more
Report abuse