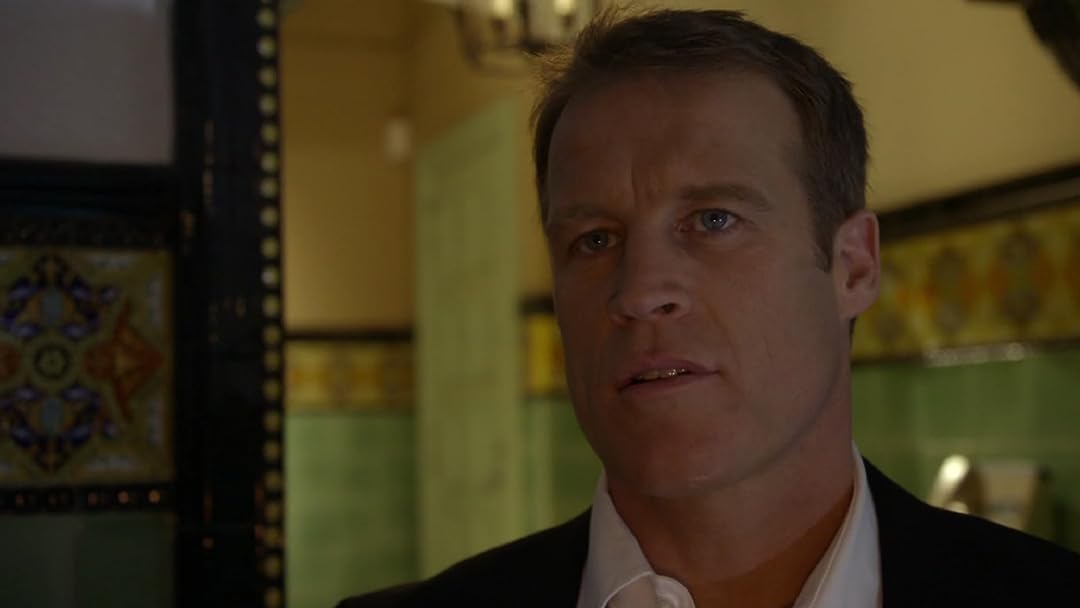 (719)
7.8201013+
Using the popular DC Comics title as a springboard, this action-packed drama stars Mark Valley as Christopher Chance, a mysterious agent for hire who assumes different identities, at times literally becoming a human target on behalf of his clients.

spyglassReviewed in the United States on March 6, 2020
5.0 out of 5 stars
AS Good As I Remembered
Verified purchase
I was really bummed when this show was canceled. I was a fan of the comic that the series was based on.
The only departure the series takes from the comic was that Christopher Chance was a master of disguise, taking on the appearance of his client who was being targeted for murder, kidnap, etc. And that his client or an agent for the prospective client always met Christopher in an Italian restaurant he owned. Unlike in this series, Christopher did not have a client in the comic as he did in the series, played masterfully by Chi McBride.

Anyway, I really enjoyed revisiting this good series and my only regret is that for whatever reason(s), season two is not for sale. Because I would buy it in a heartbeat.

Jimmy MaxwellReviewed in the United States on March 18, 2016
5.0 out of 5 stars
Very excellent program. Superb casting
Verified purchase
Very excellent program. Superb casting, acting and stories. As I mentioned in my review of the program, 'The Unit', if I like a show too much it seems that it doesn't last too long. Human Target lasted 2 seasons. In the second season we see the addition of two new cast members, women, who add a lot to the overall cast. That said, Season 1 (and Season 2) are excellent, with lots of action, and great character interaction. It's very well produced, with great cinematography, including scenes of San Francisco that are pretty well done. Still, the casting and the overall stories are what makes this show superb. You have to love Guerrero...Coolest bad/good guy in the history of television.
16 people found this helpful

B HuckReviewed in the United States on May 10, 2013
5.0 out of 5 stars
Human Target hits the bullseye!
Verified purchase
Season one of Human Target is nearly a perfect intro to a great show. In this season, the lead character, Christopher Chance, takes on other identities to get the job done. Each identity demands specific skills, one even required him to be fluent in Japanese. The show also prides itself on fresh action sequences and inventive fight scenes, such as a big brawl in the upper duct of an airplane. Imagine trying to throw some hay-makers in a 3 foot crawl space. Very fun stuff. Plus, you get some sweet cameos, including the oh so cool, Lee Majors.

Season 2 completely changed this fresh format to just the main character doing rescue missions with very little "assuming someone's identity" to achieve his goal, so for me, season to is a pass!

The real winner for season one is the dynamic between the three main characters. Three dudes who all see things a little differently, but still have respect for one another, often to help save each other's skin. If you've never seen this show, pick up season one and treat yourself. If you're already a fan, then what are you waiting for. Season one on blu ray...with bonus features...can't go wrong. There's a great documentary on what it was like trying to make "a full on action movie" each week on a tight budget.

The lead actor, Mark Valley, is terrific. This show really fits his personality. He tends to get on all these legal dramas, so I was really hoping to see this show last 5 or 6 seasons, but for some reason, the ratings just weren't there. It had a very similar vibe to USA Network's "Burn Notice" which is still going strong. Perhaps they should have moved "Human Target" to USA...where GOOD characters are welcome :-)

Experienced at lifeReviewed in the United States on November 1, 2018
5.0 out of 5 stars
A great show that deserved better
Verified purchase
The first season of this show was absolutely fantastic. There was action, humor, and great characters played by great actors. Not sure why they felt compelled to add the new boss in the second season, but it was not nearly as good. I would still buy the second season on dvd or stream if I could find it anywhere. If you are looking for fun, action, and adventure - this is the show for you!!
4 people found this helpful

William AmazziniReviewed in the United States on January 16, 2011
5.0 out of 5 stars
The Best Action Series On Television
Verified purchase
Fox was always way ahead of the major networks in the action genre department as the seasons of '24' can attest to. Now we have 'HUMAN TARGET', a high octaine well acted series which will also appeal to non action viewers. Mark Valley owns the series and finally, he gets to show off his under appreciated acting talents as he molds the character of Christopher Chance into a complex, honorable hero. Valley failed to click with audiences in the underrated British set series 'KEEN EDDIE' and was the memorable boyfriend lover of character Olivia Dunham in Fox's other hit 'FRINGE' and its fitting that both Valley and Anna Torv are married in real life. Chi Mcbride ,who I always thought never got a great role since his stint as the principal in the great series 'BOSTON PUBLIC' is Chance's assistant and plays it tongue in cheek as a detective who got the dirty end of the stick and now devotes his life to Chance after witnessing the tragic murder of his wife. And last but not least the excellent, lethal character of Guerraro played eccentrically by Jackie Earle Hailey and who I feel stole the film 'WATCHMEN' from everybody else , is linked to Chance in more ways than one. The series is produced, written and directed by the best action people in the business and I defy anyone who sees the 'PILOT' episode directed by Simon West not to think it could rank among the best theatrical action films. I missed quite a bit of the episodes on this first run so it was a joy to watch them uninterrupted. The new season has the introduction of two female leads in the mix and for what I have seen, the series has not lost its impetus. Sadly, there are rumors that 'HUMAN TARGET' may have a cult audience but not enough for it to return for a third season which would be a tragedy. Warner Home video includes excellent featurettes on the making of the series and includes interviews with its main actors. The episodes are presented in widescreen Dolby Digital sound for an excellent aural experience. So click the add to cart button and prepare yourself to watch a first rate escapist experience.
2 people found this helpful

Bennet PomerantzReviewed in the United States on July 13, 2011
5.0 out of 5 stars
A Target for a great ACTION show
Verified purchase
Damn FOX Television! They put a great show on (like Target). A series which is filled with action and adventure mixed with intelligent dialog. After two seasons, FOX canceled this and [[ASIN:B001QOGY54 Lie to Me: Season One]] because the rating of these shows were beating beaten by normal network shows. I still wish FOX would have had a brain and a heart with the public, instead of s dollar sign in their hearts.

This show combines action and adventure as I said before. It is different from the DC comic book series of the same name, in that one- Christopher Chance assumes the identity of the person or someone close to the person (sort of like Rollin hand from [[ASIN:B002L9N4N8 Mission: Impossible - Complete Series]]. This version, Chance is a protector of clients. More like a security expert with a sense of adventure thrown in.

The amazing support cast including Chi McBride and Jackie Earle Haley is pared well with Mark Valley's Chance. It works because dynamic tension of the cast is built into the storyline.

The intelligent dialog is compare to a dozen action films with great story lines that make you keep watching.The mystery of who is trying to kill the client has a lot of twists and turns that you never quite expect from a TV show

So get the first season..and cant wait until they release season two on DVD

L.E. QuarantaReviewed in the United States on February 12, 2014
5.0 out of 5 stars
Great show wish they had season 2 out
Verified purchase
This is a remake of a show on abc in 1992 starring Rick Springfield it was only 7 episodes. Luckily they got Mark Valley to play Christopher Chance for this installment and Jackie Earle Haley as. Guerrero (he is in the new Robocop movie). This series is about a bodyguard who puts himself in harms way to protect clients. There is lots of action and the stunt work is awesome. It is a really good first season and for some reason in the second season they changed the formatting of the show and added more characters that seemed to muddy the waters quite a bit. This season 1 blu-ray is great it is in full hd which rocks and I tell you having a blu-ray is way better then a digital version it just looks so much nicer on your tv then digital versions. I do wish they would give you a digital copy for when you are on the road as other blu-rays do but I can live without it. Buy this blu-ray and you will not be disappointed.
2 people found this helpful

AkelaReviewed in the United States on November 12, 2010
5.0 out of 5 stars
James Bond can go and hang himself
Verified purchase
This is James Bond shaking hands with Indiana Jones (underground sanctuary?) winking at Sean Connery (looking for a book in a monastery?) waving a hand at Christopher Lambert in The Hunted on a train and telling you true lies all the time ... or my, it does not get better than this!

Great action - how do they manage that with their collective tongues in cheek all the time, I have no idea. But manage they do, looks like they are very capable. Loved the Tango Qun Do in the Russian embassy - the only thing missing was a rose... Preposteros plots - but since when plots meant ds in a great funny action flick?

All this years I was hoping for another True Lies - amazingly enough, it came in more hours that I hoped for. Mark Valley - where was that guy when they were casting that piece of light pine they call the latest Bond? Rhetorical question. Personally, I hope for the second - and the third - and so on season. Hail, good chance and long life!
2 people found this helpful
See all reviews
Back to top
Get to Know Us
Make Money with Us
Amazon Payment Products
Let Us Help You
EnglishChoose a language for shopping. United StatesChoose a country/region for shopping.
© 1996-2022, Amazon.com, Inc. or its affiliates