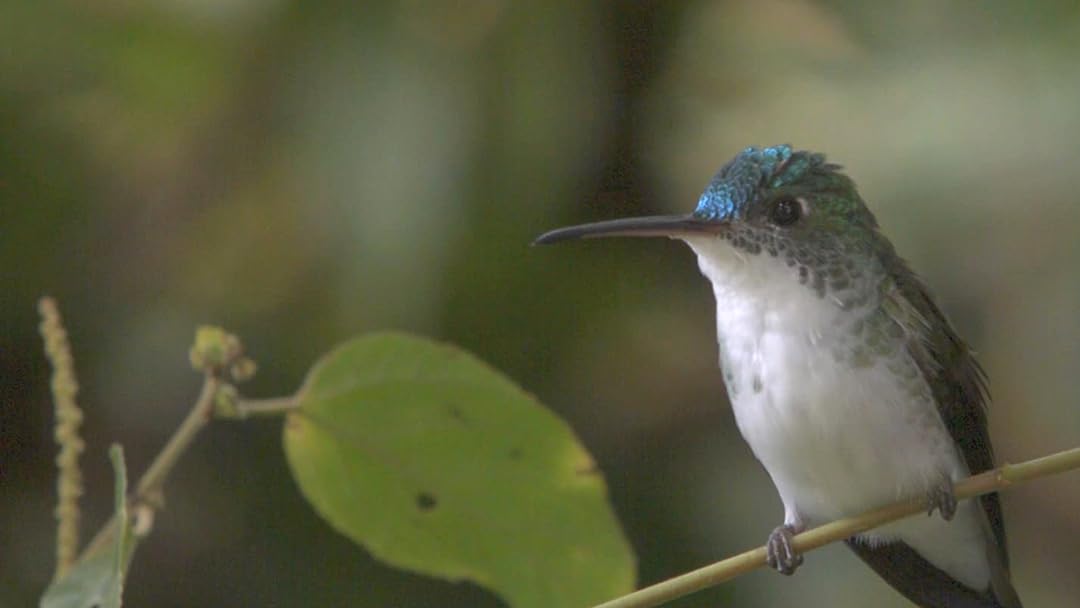 (157)
8.253min20137+
David Attenborough takes us into the remarkable lives of hummingbirds via stunning slow motion photography. Everything about these tiny birds is superb and extreme. They have the highest metabolism, fastest heart beat and most rapid wing beat in the avian world. They evolved to feed on flowering plants but are now a crucial part of wider ecosystems. How do they mate, raise their young, and live?

You'llThankMeLaterReviewed in the United States on August 21, 2022
5.0 out of 5 stars
Visually rich
Verified purchase
The visual quality of this documentary is stunning. Some of the shots captured are once-in-a-lifetime moments; like the hummingbird hovering in the middle of a rainstorm & sticking its tongue out to catch water drops.
I do question the accuracy of the narrative. Poor David just says what they tell him. He kept going on about how hummingbirds are THE most skilled & acrobatic flying animal which isn’t true. Dragonflies are. I’m not even a biologist & I know that. I’m not petty so I’m not detracting a star. Me & my mum bond over hummingbirds so this was a fun thing for us to share.
Oh, also - the narrator kept calling them “hummers”. Is that a thing? It very well could be, but it hit my ear wrong. Hummingbirds need a better nickname.

SleepyCatzzzReviewed in the United States on September 18, 2022
5.0 out of 5 stars
Incredible Facts I Did Not Know!
Verified purchase
I have had 2 feeders for Ruby Throated hummers in the NW of USA for 20 years. I watched this and learned so much about how they adapted to flowers, and flowers to them, mating dances, why they have iridescence, and so much more. The photography and videography is nothing short of stunning. I highly recommend this video with the patient and yet animated voice-over explaining what is happening. You will smile.

C. SzolcReviewed in the United States on July 13, 2022
5.0 out of 5 stars
Outstanding in almost every way
Verified purchase
As I've read some negative reviews, it seems that some resent the narrative that allows the world to be more than 6000 years old. Yes, it can be a bit irritating to hear Mr. Attenborough proclaim that flowers modified themselves to meet the needs of the hummingbirds and vice versa. I suppose such euphemism is disconcerting to those who measure time from the moments of their own births until the moments of their deaths a few decades later. In Mr. Attenborough's paradigm, measurable time spans hundreds of billions of years and viewing coordinate change over billions of years can appear consciously intentional when viewed as before and after snapshots. For evolutionists, this is simply a way of speaking.

For many God-believing people the only real problem is who should receive credit for the changes. So, we should all lighten up and enjoy the beauty and majesty of the hummingbirds in our world. If His eye is on the earthtone sparrow, He surely has spent long days appreciating the beauty of the hummingbird creation, no matter how long or what process He took to make these special creatures.

As for the time creation has existed, people should read the Whole Bible, not just the few passages that I'll informed church "leaders" use to shackle God. 2 Peter 3:8 suggests that our current creation is somewhere between 13,000 and 2 billion years old, depending on where and how this multiplier is applied.
2 people found this helpful

3cat2dogsReviewed in the United States on September 14, 2022
5.0 out of 5 stars
I learned something
Verified purchase
I've always had hummingbird feeders but this is the first time watching a documentary about these wonderful creatures. Thank you

MartiReviewed in the United States on August 14, 2022
5.0 out of 5 stars
Beautiful nature
Verified purchase
The film was inspiring
> Beautifully produced, If you have criticism remember birds such as hummingbirds are scientifically valuable and great to study but also mysterious, spiritually precious and romantically beautiful. and the narration took all of this into account very well.,

John P. Jones IIIReviewed in the United States on December 5, 2019
5.0 out of 5 stars
"Living at the limits of what is possible…"
Verified purchase
I’ve tried. I admire “birders,” though not the fanatics who obsess over their scorecard. Yet my efforts to identify the species of birds often don’t get much beyond: “big,” “medium,” and “small.” The bit beyond includes Sandhill cranes, Snow geese, and a buzzard or eagle or two. Hummingbirds though, are in a unique category: a bird that everyone recognizes.

David Attenborough is also in a unique category: today’s most recognizable and respected naturalist. A man that President Obama invited to the White House for a chat – a recording of which is available on Amazon for a potential viewing. He possesses a firm delightful quietly authoritative British accent. A man who will publicly state that human overpopulation is at the heart of so many of our problems. Although I have recently watched another documentary on hummingbirds, I felt that Attenborough’s take on the matter would not be redundant, and it was not. The director of this film is Paul Reddish and it was released in 2013.

As Attenborough says, hummingbirds are the “celebrities,” the stars of the bird world with colors and prowess unmatched. They are among the smallest warm-blooded animals on earth. They have evolved long thin bills and long tongues, in symbiosis with plants, which need their pollen properly distributed, regardless of weather conditions, which cold-blooded insects find difficult to do. Plants however, have to provide more nectar, since warm-blooded birds use ten times as much energy as insects. Hummingbirds drink more than their body weight in nectar each day.

Slow motion cameras are what distinguishes this documentary from the previous one that I had seen. One second in real time stretches to 50 digital seconds; thus the viewer can readily see the hummingbird wings flap, distinctly, and not be just a blur. The viewer can watch hummingbirds hover, fly backwards and even upside down. Their wing beat is different than other birds – there is life and power on both the up and down strokes, thanks to a twist of the shoulders. Almost all other birds fold their wings in, to bring them back up, losing any thrust in the process. Hummingbirds need protein, and the slow motion cameras capture them eating insect in mid-flight.

Stationary, a hummingbird’s heart beats 400 times a minute. In flight, it is 1200 beats a minute. The energy derived from the nectar is used to furiously pump oxygen to the wing muscles. At the limit to what is possible. They must refuel every 15 minutes. At night their bodies go into torpor; the heart rate drops from 400 to 40, and their body temperature plunges. Their bright colors are not caused by pigmentation; rather, the iridescence is caused by layers of tiny air bubbles that refract the light in a particular way.

The documentary concludes in Rockport, Texas. In September, Rockport is the site of a hummingbird festival, as the hummingbirds gather, sip copiously from the many feeders placed out for them, DOUBLING their body weight in three days, in preparation for their 800 km non-stop flight across the Gulf of Mexico to their winter homes in South America. Much is still not known how they accomplish this; suitable topics for some meaningful PhD.

It was great to hear Attenborough’s voice again, conveying much erudition. 5-stars.
26 people found this helpful

nitricsReviewed in the United States on September 5, 2022
5.0 out of 5 stars
Nice
Verified purchase
What a show, the details are amazing.
See all reviews
Back to top
Get to Know Us
Make Money with Us
Amazon Payment Products
Let Us Help You
EnglishChoose a language for shopping. United StatesChoose a country/region for shopping.
© 1996-2022, Amazon.com, Inc. or its affiliates