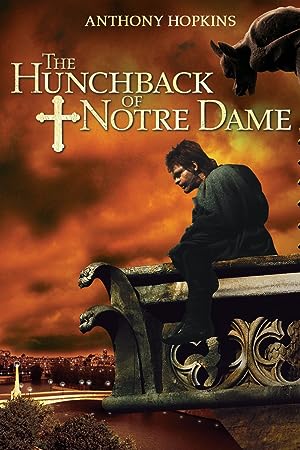 The Hunchback Of Notre Dame

(164)
6.41 h 42 min1982NR
Quasimodo, the hunchbacked bellringer of Notre Dame's cathedral, falls in love with the beautiful gypsy dancer, Esmeralda. When Esmeralda is arrested for lewd dancing, she catches the eye of Quasimodo's guardian, the archdeacon of the cathedral. Further unwanted affections are lavished upon her by a poor street poet. But Esmeralda's love is reserved for a handsome soldier. When a mob accuses Es..

Kenneth E. SeguinReviewed in the United States on October 16, 2019
5.0 out of 5 stars
As Enjoyable as the 1939 Version
Verified purchase
I purchased this 1982 version of "The Hunchback of Notre Dame" starring Anthony Hopkins as Quasimodo and Lesley-Anne Down as Esmeralda after returning from a 3-week vacation to France in 2019. While I had seen the televised 1939 black & white version starring Charles Laughton Maureen O'Hara when I was a youngster and enjoyed it, I wanted to see a colorized, updated version. While Wikipedia notes some of the elements that were changed from the novel, it found it to still be an enjoyable film.
4 people found this helpful

MaoriReviewed in the United States on November 23, 2012
3.0 out of 5 stars
Not quite......
Verified purchase
There's good and there's not-so-good.
The good: You get nice and relatively accurate late medieval pageantry on screen. Excellent for bridging gaps between Ren Faires. Lesley-Anne Down is GORGE!
The not-so-good: This film only vaguely resembles Hugo's original story.The real main 'characters' - the cathedral itself and the city of Paris - are largely neglected, the human characters have been massively simplified and flattened - some are just plain missing - and Djali, quite an important character in the story, only gets to baaah a few times, but not do much else.
It is, of course, difficult to pack as much character development as there is in the original story into a 2 hour-or-less movie, but perhaps they should have just made a longer movie......
Read the book (which is very good) to know what ACTUALLY happens.

Ballet FanReviewed in the United States on March 10, 2014
3.0 out of 5 stars
Entertaining, but without depth of feeling.
Verified purchase
Definitely a SWASHBUCKLING adaptation of Hugo's novel, with lots of action centered around pursuit of the damsel in distress, but without depth of character. Lesley-Anne Down's portrayal of Esmeralda is particularly one-dimensional--lacking the anatomical curves and inner fire one would expect of a woman capable of arousing the passions of the key male characters. The director makes ample use of Down's pretty face, but in the final analysis, one is inclined to feel, "What's all the fuss about?" The scenes of Quasimodo (Anthony Hopkins) scampering like a monkey among the ropes and beams in the bell-tower of Notre Dame Cathedral are the most exciting part of the film.
4 people found this helpful

groovinsteinReviewed in the United States on April 6, 2015
2.0 out of 5 stars
Where is the story that I yearn to be told??
Verified purchase
I remembered seeing this on TV after a few minutes of viewing it. Back then I was just disgusted with the whole mess. This time I lay the blame at the feet of those who make the decisions of what the finished product will look like. The film must be their vision and they must have the courage to see it through. If the film was in fact their vision I wish they had chosen another story to tell.
My best advice is to read the book and understand what Hugo intended to convey. I can only hope that you will find what I and countless others have in "Notre Dame de Paris"!
4 people found this helpful

Tony ArenaReviewed in the United States on January 28, 2022
5.0 out of 5 stars
Great Item
Verified purchase
Item is Great...Fast delivery...A+++++ Seller...Pleasure doing business with you !

Meredith FolsomReviewed in the United States on October 25, 2019
4.0 out of 5 stars
Good but there is better.
Verified purchase
The acting is excellent, the cinematography is excellent, the only problem is the neutering of the political content - no printing presses. The Charles Laughton version is still the best.
One person found this helpful

C. QuillenReviewed in the United States on January 29, 2014
4.0 out of 5 stars
Not the best Hunchback movie, but there are certainly elements to love
Verified purchase
At this point, I've watched several Hunchback adaptations ('39, '56, '77, Disney's '96, '97) and personally, I've got to say that this version is my favorite, mostly due to Derek Jacobi as Frollo. First off, I have to give a nod to the producers for keeping Frollo a priest in this movie, but even more so, I love how much more the audience is able to see the character's inner conflict. Jacobi is the most expressive and sympathetic Frollo I've seen yet, giving this movie a huge boost in my opinion as the tragic archdeacon is the first and foremost reason why I love this story. Besides this, Anthony Hopkins also plays as one of the better Quasimodos (I will admit though that his character's costume is ridiculous) and the rest of the cast are solid, although nothing to rave over. The narrative was relatively good (though the ending was disappointing) and flowed well, the visuals pretty rather than stunning, and the costumes (usually) wonderful.
Overall, I would say this TV production is a solid film that stands apart from others due to Derek Jacobi's stunning performance. Not the closest book-to-movie adaptation, but a compelling tale nonetheless.
6 people found this helpful
See all reviews
Back to top
Get to Know Us
Make Money with Us
Amazon Payment Products
Let Us Help You
EnglishChoose a language for shopping. United StatesChoose a country/region for shopping.
© 1996-2022, Amazon.com, Inc. or its affiliates