The Hungry and the Fat and millions of other books are available for Amazon Kindle. Learn more 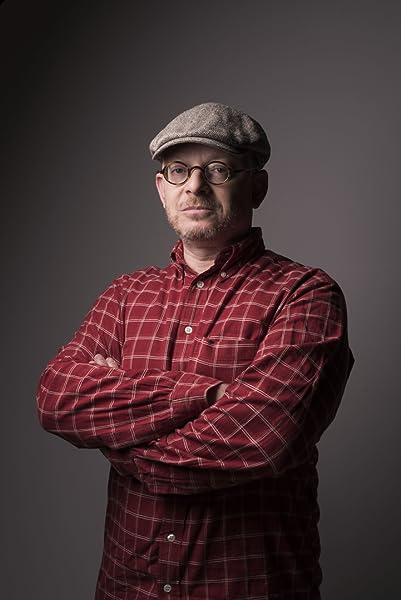 by Timur Vermes (Author)
3.6 out of 5 stars 19 ratings
See all formats and editions
Sorry, there was a problem loading this page. Try again.

Germany has imposed an upper limit on the number of asylum seekers, and Europe's borders are closed. Beyond the Sahara, huge camps have been built for millions of people who have no choice but to wait. They have been waiting so long that they could have walked to Europe by now... if it didn't spell certain death.
When German model and TV star Nadeche Hackenbusch visits the largest of the camps with a camera crew, young refugee Lionel recognizes a unique opportunity: to use the media attention to organize 150,000 refugees to set off on a march to Europe.
The viewing ratings are off the scale! and advertising money pours in. But Germany's politicians only look away helplessly. As the convoy moves closer, through Jordan and Syria and into Turkey, interior minister Joseph Leubl faces his greatest challenge yet and two urgent questions: What do we do now? And what kind of country do we want to live in?

Giving readers exactly what they loved about Look Who's Back, this new book is explosive, radical and full of Timur's trademark wit. Timur pulls no punches and aims directly where it hurts the most. This book that will have enthusiastic fans and bitter opponents. But we can promise that it will leave no one indifferent.

"The Girls in the Attic" by Marius Gabriel
The bestselling author of The Designer presents a sweeping story of blind faith, family allegiance and how love makes one man question everything he thought he knew.| Learn more

Praise for Look Who's Back
"You know his name. You know his face. You know his hair and mustache, which are caricatured with sharp, witty minimalism on the cover of Look Who's Back, in which a baffled Adolf Hitler is returned to the even more baffled German people. Now you'll also know Timur Vermes, whose debut novel has created a sensation in Germany. [Look Who's Back] is desperately funny . . . Mr. Vermes has created an ingenious comedy of errors in which the jokes are either on Hitler's misapprehensions about the modern world or the modern world's refusal to take him at face value . . . Read this book."―Janet Maslin, The New York Times

"Very funny . . . The frisson of reading Look Who's Back comes from its seamless transition from Borscht Belt one-liners to disturbing invocations of the legacies of Nazi rule. Mr. Vermes gives us a bracingly double-sided Hitler-the arresting public speaker and astute negotiator who loves dogs and small children, and also the fanatical champion of political violence, global tyranny and ethnic cleansing . . . Translator Jamie Bulloch helps by providing a glossary at the close of the book, but what people will remember is his perfect rendering of the ridiculously orotund, yet oddly compelling, manner of Hitler's speechifying."―Sam Sacks, The Wall Street Journal

"Look Who's Back is Hitler satire at its best . . . while there has been much debate over whether or why it's appropriate to laugh at Vermes's relentless Hitler satire, this well-researched and uproariously cringe-worthy book makes it hard not to . . . It is ultimately a sort of commentary on Hitler's first ascent to power-on the point at which a charismatic man starts being taken seriously, and what that transition entails . . . laugh-out-loud funny."―Kira Bindrim, Newsweek

"[A] wickedly satiric first novel . . . Hitler is, of course, deadly serious, and the dissonance between his earnest bigotry and the vacuousness of our media-soaked age is the comic grist that propels the novel toward its truly ironic conclusion. While German journalist ­Vermes has a good deal to say about the state of contemporary Germany, his reach here is more universal, as he's crafted a sardonic send-up of a media and a world where the message doesn't matter so long as your ratings are high and your videos go viral on YouTube."―Library Journal

Timur Vermes is the son of a German mother and a Hungarian father who fled the country in 1956, Vermes was born in Nuremberg in 1967. He studied history and politics and went on to become a journalist. He has written for the Abendzeitung and the Cologne Express and worked for various magazines. He has ghostwritten several books since 2007. He is the author of Look Who's Back, an international bestseller that was made into a movie by Netflix.
ABOUT THE TRANSLATOR: Jamie Bulloch's translations include Ruth Maier's Diary, Portrait of a Mother as a Young Women by F. C. Delius, and novels by Paulus Hochgatterer and Daniel Glattauer.
Start reading The Hungry and the Fat on your Kindle in under a minute.

Timur Vermes was born in Nuremberg in 1967, the son of a German mother and a Hungarian father who fled Hungary in 1956. He studied history and politics and went on to become a journalist. He has written for various newspapers and magazines, and has ghostwritten several books since 2007. This is his first novel, and is currently being made into a film by Mythos in a co-production with Constantin Film.

SC
4.0 out of 5 stars Biting satire that could have benefited from a bit of pruning
Reviewed in the United States on March 29, 2020
Rounded up from 3.5 stars.

Like "Look Who's Back," Timur Vermes's first book, which I loved, "The Hungry and the Fat" is biting satire just shy of absurdity. I didn't enjoy this one as much, though. The middle part sagged and dragged, so much that I almost lost interest in discovering how it was all going to play out, but then the final third or so redeemed the rest of the book. The ending was both surprising (to me, anyway) yet inevitable. The entire thread involving the embedded women's-magazine writer, her beyond-purple prose, and her absolute self-centeredness was brilliant. The conceit of not giving the names of a few of the main characters seemed arbitrary and distracting, and the descriptions of the settings outside of Germany were too vague for my tastes. The entire conceit, however, was original, thought-provoking, and in parts very very funny.

Thank you, NetGalley and Quercus, for providing me with a free copy in exchange for an honest review.
Read more
Helpful
Report abuse
See all reviews

BookWorm
4.0 out of 5 stars Memorable, with a powerful end after a slow start and middle
Reviewed in the United Kingdom on July 10, 2021
Verified Purchase
An author who wrote his first novel about the impact on 21st century of a time travelling Hitler is not someone who shies from controversy. Timur Vimes has followed up his divisive but brilliant 'Look Who's Back' with a story about refugees. A celebrity presenter has travelled to a refugee camp in sub-Saharan Africa to make a television show about the people living there. But things take an unexpected turn when she becomes involved with a refugee and together they decide to walk - along with 150,000 others - all the way to Germany. A simple and well organised initiative, the march slowly but inexorably draws closer to Europe - and tensions rise as the politicians realise the growing number of migrants might actually make it...

The book is told from multiple viewpoints, including television executives, politicians, journalists, the presenter and her migrant lover, and the brutal but effective gang boss who manages the logistics of the operation. Like the march itself, the novel has a slow start - in fact, it even drags in places. But things hot up in the last 20% as events spiral into a tense finale.

The disturbing thing about the book is that it is plausible - nothing that happens is beyond the realms of possibility. The refugee march concept is so simple it is quite surprising people haven't tried it, whilst the less-than-charitable reactions of the Europeans to the approaching convoy are all too likely. It's also important to remember this is not such a hypothetical situation - hundreds of thousands of desperate people are already trying to get to Europe now, just in a more dispersed and less visible way - and are dying in the attempt. The novel just funnels a genuine problem into a distilled and unignorable format.

As such it's one of those satires that doesn't feel very satirical. There are a couple of humorous bits but it isn't really a funny story. Challenging and thought-provoking, certainly. Gripping and hard-hitting in the last part, and a bit dull in the first part. It's true you can get away with more by framing something as a satire, and that's fair enough, but like a lot of satirical novels it's uncomfortably close to the mark.

I don't think this is as good as 'Look Who's Back', partly because I found it hard to form a strong bond with any of the characters, and the political bits are overdone. Also for readers who don't have a passing knowledge of German politics (the acronyms for the parties and what they roughly stand for - right wing/left wing etc.) will get lost in some of the chapters. I follow European politics at a basic level and had heard of most of the parties but even I didn't quite get all the subtle distinctions.

That said, it's certainly a book that I will remember reading. I'm fascinated to see what topic Vermes takes on for his next offering.
Read more
Report abuse

Edwynmccann
2.0 out of 5 stars Prepare to be disappointed
Reviewed in the United Kingdom on December 17, 2021
Verified Purchase
The idea behind this story is such a good basis for a great story but is unfortunately let down by the execution. While it is a parody it is simply not interesting enough to hold the reader. I gave up 50 percent of the way through. The writing isn't bad but the characters do not hold the interest. At a time when this subject is much in the news, a more realistic and serious case study would have held the interest much better.
Read more
Report abuse
See all reviews