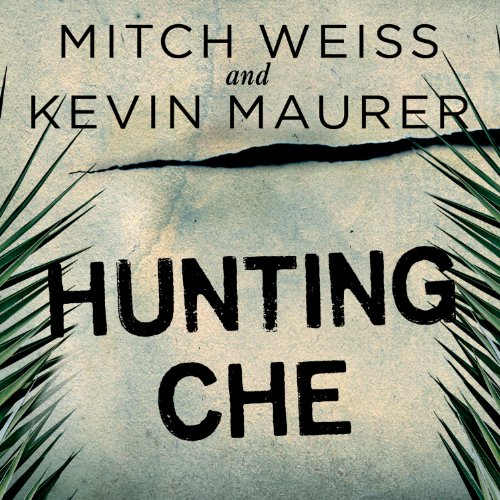 4.5 out of 5 stars
4.5 out of 5
91 global ratings
How are ratings calculated?
To calculate the overall star rating and percentage breakdown by star, we don’t use a simple average. Instead, our system considers things like how recent a review is and if the reviewer bought the item on Amazon. It also analyzes reviews to verify trustworthiness.
Top reviews

William Bell
4.0 out of 5 stars An interesting and enjoyable read.
Reviewed in the United States on April 28, 2018
Verified Purchase
A very interesting look at a little-known incident from the Cold War. It's a real page-turner. I flew through this one, and thoroughly enjoyed it. You get a number of different viewpoints, from leaders both in Washington and La Paz, and from both US and Bolivian soldiers and operatives. The narrative is also accompanied by a nice assortment of photographs of the various people involved.
Read more
One person found this helpful
Helpful
Report abuse

BIKER101
5.0 out of 5 stars A book that must be read
Reviewed in the United States on March 4, 2015
Verified Purchase
This book was so good that I bought extra copies for my friends. it is a unique book because very few people know the final episode in Che's life and many don't understand what this so called revolutionary was doing in Bolivia at that time. There are photos which clearly show Che's condition when he was captured by the Bolivian's ranger. The story takes you back to the political situation in Latin America in the sixties. Once you start to read this book, it is hard to put it down.
Read more
2 people found this helpful
Helpful
Report abuse

Kindle Customer
5.0 out of 5 stars Green Berets, Special Forces, Foreign Internal Defense and Development
Reviewed in the United States on May 24, 2018
Verified Purchase
A good look into the missions of the Green Berets whose primary missions are to train, eqip and work through the forces of the host nation to overcome internal and external threats to their lives and security. Great reading into the history of counterinsurgency and its many variables and the American Special Forces trained to go anywhere, anytime, to accomplish anything.
Read more
Helpful
Report abuse

FMZ0311
5.0 out of 5 stars How COIN is supposed to work!
Reviewed in the United States on April 30, 2015
Verified Purchase
Vivid, but pertinent storytelling coupled with well-articulated historical intelligence analysis. Definitely a great book that perfectly describes the kind of SF job that Groups were made for. I whole-heartedly recommend this book to anyone who wants to know about how COIN is SUPPOSED to work, or how the US used to deal with threats during the Vietnam era that were not actually in SE Asia.
Read more
2 people found this helpful
Helpful
Report abuse

Dave B.
5.0 out of 5 stars Very informative
Reviewed in the United States on June 27, 2021
Verified Purchase
Well written book. I enjoy learning about history and this was a subject I hadn't studied before. It's a good read.
Read more
Helpful
Report abuse

Boliviana
5.0 out of 5 stars The true Story
Reviewed in the United States on April 17, 2014
Verified Purchase
Bolivians that fought as Rangers, or peasants that were patriotic have been punished by the Narco Dictator Communist Evo Morales, they are banned from any participation on official acts, events for military ,retired and active.
The traitor Morales forces Bolivian soldiers to cry out the call of the Castristas, have Cuban and Venezuelan as advisors.
Those that look at Che with admiration should know that he invaded nations, the last one Bolivia, as a typical Argentinian with arrogance he believed he would be welcome as a heroe and savior. He had two things against him, peasants and not being Bolivian.
Bolivia had the most important revolution after Mexico in Americas, there was nothing that the Castristas could offer.
Even Bolivian Communists would not support the terrorists.
Guevara was cruel , he robbed peasants, tortured the mules and horses they used.
The very few American military that trained our soldiers did a fantastic job, and it was not droves of American soldiers that got Che and the rest they were Bolivians defending the Motherland. La Patria.
Retired General Gary Prado to this day has to defend himself from Morales that wants him in jail or dead for his participation as an officer defending his country ; he has constantly harassment from Evo Morales ,who calls Fidel Castro "my father".
I have only words of thanks for the Americans, and patriotic Bolivians .
We are proud of the military of that time, the lackeys of the Cubans and Chavez of today shame all of us.
The authors captured the place ,people and time of an event that changed the evil plans of Castro , Che for ever.
A very much needed account of the fight for freedom.
Read more
One person found this helpful
Helpful
Report abuse

richard Wall
4.0 out of 5 stars Great book
Reviewed in the United States on May 26, 2014
Verified Purchase
As a historian, it was refreshing to read a book that actually chronicled the capture of Che. The CIA, contrary to popular lore, wanted him alive as he had more value in intelligence and propaganda than as a martyr.

While the emphasis was on the fact that US Special Forces trained the Bolivian Rangers who ultimately captured Che, the real heroes are the Bolivian Soldiers and the two CIA Agents, one of whom was Felix Rodriguez, who were able to peice the clues together and steer the Rangers to the region where Che was operating/
Read more
2 people found this helpful
Helpful
Report abuse
See all reviews

Mihir ajgaonkar
5.0 out of 5 stars Excellent read.
Reviewed in India on May 27, 2018
Verified Purchase
Awesome book that tells us the inside story of Che's capture and death and the lesser known side of his personality. The brutality of the revolution that Che planned to inflict on Bolivia and the courage of the Bolivians to resist this attempt have been vividly portrayed in this book.
Read more
Report abuse

HARI KUMAR M
5.0 out of 5 stars Five Stars
Reviewed in India on November 17, 2014
Verified Purchase
excellent
Read more
Report abuse
See all reviews
Back to top
Get to Know Us
Make Money with Us
Amazon Payment Products
Let Us Help You
EnglishChoose a language for shopping. United StatesChoose a country/region for shopping.
© 1996-2021, Amazon.com, Inc. or its affiliates