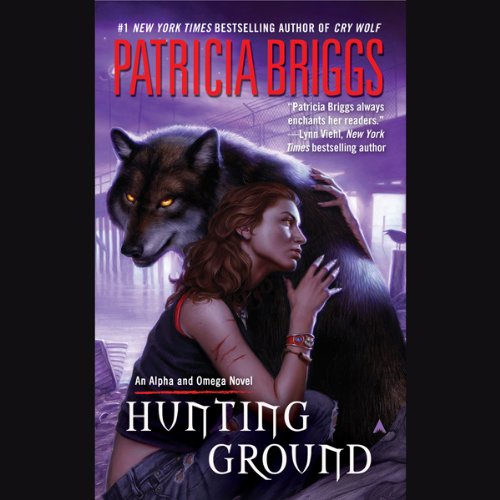 List Price: $28.00
You Save: $4.05 (14%)
By completing your purchase, you agree to Audible’s Conditions Of Use
Sold and delivered by Audible, an Amazon company
Share

4.8 out of 5 stars
4.8 out of 5
2,510 global ratings
How are ratings calculated?
To calculate the overall star rating and percentage breakdown by star, we don’t use a simple average. Instead, our system considers things like how recent a review is and if the reviewer bought the item on Amazon. It also analyzes reviews to verify trustworthiness.

Common-Sense-Is-Key
5.0 out of 5 stars Enjoyable but not for me...
Reviewed in the United States on January 4, 2020
Verified Purchase
In short, I was looking for a unique shifter romance with the Alpha & Omega positions; but this is more suited to those who prefer romance without any intimacy details at all. This series is missing so many other character development details that I need in a story; but are given whimsical lines after the fact, instead of covering them in an epilogue. I can't continue when this is not what I was looking for. I gave 5 stars because this story deserves respect even though it's not for me.

When I read a series, I want to be transported from everyday worries & get lost in the talents of authors. The more important details are necessary for me to become immersed. While I truly believe this series is enjoyable, it's missing adult-level intimacy & so many details. The details missing are like how book 1 mentions mating & a wedding several times throughout the book; but only half-heartedly gives cliff notes that the wedding occurred, when other books would actually give it a chapter to help grow the characters.

Another example, from book 2, I honestly thought that Charles & Anna were not having intercourse, other than that 1 time in the 1st book. There were moments it seemed like they were, but since the author chose to not give any intimacy details, I assumed Anna wasn't ready yet. Apparently, my assumption was wrong & it took until over halfway through this book to realize the truth. I wasn't looking for smut dialogue; but I hoped for a lot more than what I read. Since the action wasn't suspenseful because the outcome was always telegraphed, at least give intimacy detail or something more. This book was a lot better at hiding storyline details until the "parking garage attack" scene; then I knew what was going to happen later.

I also had issues identifying which character, if any, was speaking. The clues were not as clear, since 1st, 2nd, & 3rd person dialogue was used throughout this series. I had difficulty deciphering who was speaking; which made me have to reread many sections to imagine the story or to understand what was going on.
Read more
8 people found this helpful
Helpful
Report abuse

K Reviews
4.0 out of 5 stars Alpha & Omega 2 (read after Moon Called and Cry Wolf)
Reviewed in the United States on December 16, 2018
Verified Purchase
This is the second book in the Alpha & Omega series. If you're trying to read the Mercyverse is linear order (novels only) it goes Moon Called (Mercy 1), Cry Wolf (A&O 1), Hunting Ground (A&O 2), then Blood Bound (Mercy 2). It can be a bit confusing since they don't alternate or something that would be predictable.

This book takes place shortly after the events in Cry Wolf conclude. In this book Charles (Bran's son) and Charles' new mate, Anna, are sent to Seattle to play werewolf politics. There's supposed to be a summit to discuss the werewolves "going public" which is to be moderated by a Fae who has agreed to be the moderator for a price.

Interesting secondary characters abound in this book, from members of the Seattle pack, including a blind witch, the European werewolves (especially the Alphas from England and France), and the others involved in the summit.

I didn't love this one quite as much as Cry Wolf, but I still enjoyed the read and will continue with the series. I look forward to seeing Charles and Anna continue to develop - my favorite parts of this book were definitely the more romance-heavy aspects of their plot as they continue to work on the human side of their relationship.

I was intrigued enough by their backstory after reading this book to seek out Shifting Shadows, which contains the novella of how they met (Alpha & Omega). If you want to read chronologically you should look up the timeline, but you'll want to start with some of the stories in Shifting Shadows.
Read more
6 people found this helpful
Helpful
Report abuse

Thunderbird
5.0 out of 5 stars LOVE THIS SERIES!!
Reviewed in the United States on April 17, 2019
Verified Purchase
Oh, Patricia, you delicious genius! You’re my spirit animal!

(Before I continue on to reviewing the story itself, let me just say the book, though second hand, was in mint condition and arrived in a timely fashion. Very satisfied!)

This is one of the few authors of the paranormal genre that can still make me fly through the pages, spilling popcorn down my shirt, guessing till the last minute. Her dialogue is sharp and clever, her characters achingly real, and her plots masterfully thiughtout. I hesitate to call it a paranormal romance since it isn’t about getting your rocks off and slobbering over the werehunk’s perfect abs *yawn* 🐺 there’s actually a lot more depth to the characters which makes them feel so absolutely real that you’re half convinced werewolves do in fact exist and there’s more to the genre than a cheap little sex fest. It’s true romance in that the connection between Charles and Anna is something far more intricate and poignant.
I probably read Cry Wolf in about 4 hours—literally didn’t even want to stop for a pee break! I was that hooked! I love this series probably even more than the Mercy Thompson Series (please don’t fling the spoiled tomatoes just yet) because I love getting to watch Anna evolve into a badass. Though, unlike Mercy, she’s more of the subtle badass.
Anna’s new to the werewolf world, still tentative (though not timid anymore) has a ton still to figure out about what exactly she is, what being an omega means, and is still navigating her new relationship with Charles Cornick. I love their relationship. Love watching them learn to trust each other more and love how their marriage makes them stronger together. I love the peace they give each other; I think all couples can learn something from these two.
Of course the action and the mystery—the intricacies of the plot as Anna and Charles try to figure out who exactly the vampires are targeting and why—makes this just another perfect drop kick in a series of fantastic ass-kicking! And I love how this story ties in with the the world of Mercy Thompson.
Read more
3 people found this helpful
Helpful
Report abuse
See all reviews

Chrissy’s Book Shelf
5.0 out of 5 stars Working As A Team
Reviewed in the United Kingdom on January 24, 2021
Verified Purchase
Anna and Charles haven’t been together very long when Bran has to go to face a conference of Alpha wolves from Europe to discuss werewolves coming out of the closet. Charles convinces Bran he has to go instead and Bran insists that he take Anna with him.

Off to Seattle the pair go and face dangerous foes from Europe, with the local werewolves as support. Soon they realise it’s not just werewolves that are the danger in Seattle. Anna has to learn how to master her fear of dominant werewolves and when she meets an Omega from Europe finds someone to support that need to change.

Charles has to learn how to open himself up to his mate, because after 200 years of locking down his emotions it’s hard to open the mate bond. He has to allow Anna the chance to grow into her own strength and to avoid smothering her.

This story is riveting and it’s hard to see how it’s going to unravel as there are many strands to the plot. We meet interesting and intriguing characters and get swept up in their emotions. This author writes fully realised characters and it means they feel complete. We are shown more of the character rather than author building onto a shell to make the story work.

Anna and Charles are a wonderfully complex and captivating couple that are never going to grow boring to read about.
Read more
Report abuse

mummyrach
5.0 out of 5 stars Best one yet.
Reviewed in the United Kingdom on May 7, 2020
Verified Purchase
I stupidly started reading the Mercy Thompson series because it was on sale. And then couldn’t stop. So far I’ve read up to the start of Frst bittern in the MT series but went back to read the two series in reading order as it became clear I’d missed something somewhere.

And this is the best book yet. I think I actually like Charles and Anna more than Mercy and Adam! 😲

This keeps you guessing right until the end whereas I’ve been able to see the protagonist way before.

But be warned. This is addictive!
Read more
Report abuse

Mrs H
3.0 out of 5 stars Not as good as the first one.
Reviewed in the United Kingdom on April 14, 2016
Verified Purchase
I enjoyed the first book and the introduction in another book and I feel invested in these characters. This book though... Some of the prose and dialogue seemed muddled and I had a hard time grasping what she was getting at, it was like she had to get out quick and then didn't go back and check it made sense :/
The other thing that bothered me was the vernacular of the English characters! I know just from watching tv shows how Americans talk but clearly no research was done into how Brits talk - mainly the use of Scots rather than Scottish and 'be ready in a half hour' when we would say 'be ready in half an hour'. I know it's a small thing but it made the believability (I know! In a werewolf book 🙄!) hard and grated on me. Also the who done it aspect was a little weak and who did it didn't seem to do it for any explicable reason!
Anyway. I'm still going to read on because i really like Anna and Charles's relationship and Anna in general so...
Read more
One person found this helpful
Report abuse

Ms. Theresa M. Derwin
5.0 out of 5 stars My Kingdom for a Wolf
Reviewed in the United Kingdom on August 26, 2019
Verified Purchase
Anna, Omega and mate to Charles, is still adjusting to her new status and has more challenges ahead in Seattle, where she supporters Charles during discussions about the werewolves coming out.
Skullduggery, violence, plans with plans and machinations abound as various people/creatures battle for political power and dominance.
Anna learns more about being an Omega and makes friends along the way, as the bodycount piles up.
Bloody but fun
Read more
Report abuse

Avid Kindler
5.0 out of 5 stars Unpredictably perfect
Reviewed in the United Kingdom on September 19, 2020
Verified Purchase
Very enjoyable continuation of the story of Charles and Anna, the Alpha and Omega of the title.

New dynamics and hidden threats are revealed when Anna accompanies Charles as he presents the Marrok’s plans for the future to pack alphas from other countries.
Read more
Report abuse
See all reviews
Back to top
Get to Know Us
Make Money with Us
Amazon Payment Products
Let Us Help You
EnglishChoose a language for shopping. United StatesChoose a country/region for shopping.
© 1996-2021, Amazon.com, Inc. or its affiliates