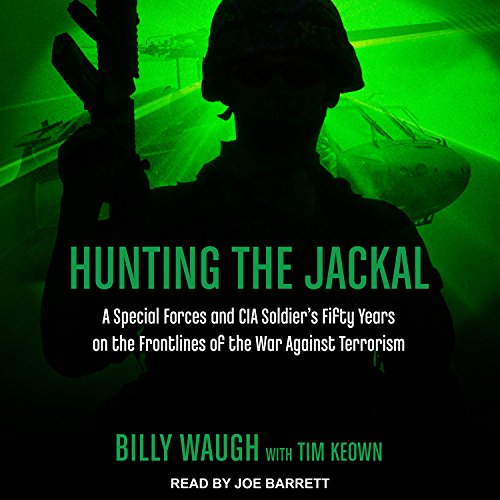 Hunting the Jackal: A Special Forces and CIA Soldier's Fifty Years on the Frontlines of the War Against Terrorism

For more than half a century, Special Forces and CIA legend Billy Waugh dedicated his life to tracking down and eliminating America's most virulent enemies. Operating from the darkest shadows and most desolate corners of the world, he made his mark in many of the most important operations in the annals of US Spec Ops. He spent seven and a half years behind enemy lines in Vietnam as a member of a covert group of elite commandos. He trailed Osama Bin Laden in Khartoum in the early '90s and would have killed the terrorist kingpin if his superiors had allowed it. And at the age of 72, he marched through the frozen high plains of Afghanistan as part of Operation Enduring Freedom. Hunting the Jackal is the astonishing true account of the singular career of a courageous soldier in his nation's shadow wars - including his pivotal role in the previously untold story of the capture of the most infamous and elusive assassin in history, Carlos the Jackal.

Your audiobook is waiting!
Learn more about membership
List Price: $24.95
You Save: $3.12 (13%)
By completing your purchase, you agree to Audible’s Conditions Of Use
Sold and delivered by Audible, an Amazon company
Share

Evan Gamble
4.0 out of 5 stars God Damn Hero
Reviewed in the United States 🇺🇸 on August 11, 2022
Verified Purchase
This guy is a legend and should probably get more recognition for his service. Great read, pages were sticky though.
Read more
Helpful
Report abuse

NJ Person
4.0 out of 5 stars Excellent Read
Reviewed in the United States 🇺🇸 on November 11, 2011
Verified Purchase
Billy Waugh is an old man who loves to kill. That makes him sound like a sociopathic serial killer, but technically he isn't. He kills people who are trying to kill him. It's not like he preys upon the helpless; everyone he kills is given a fair chance. Except for the husband and wife cooks whose throats he ordered slit as his Special Forces team snuck into a North Vietnamese military camp. Hey, they were NVA! If Billy's underlings hadn't killed them, they would have alerted the entire camp!

It's not an unfair assessment to say Billy Waugh is a bloodthirsty killer who is amazingly good at compartmentalizing, and who found a way to sate his bloodlust through working for the US government, but it wouldn't be a balanced assessment. He spends most of a page admitting he cried when some ailing Cambodian colonel led his people into the relative safety of South Vietnam, and he spends most of a page admitting he cried when people with whom he fought died valiantly, and he spent TWO pages expressing his disgust over how the Vietnam Conflict (War) ended and what a shame it was so many people died in what was ultimately folly. In those two pages he expressed an admirable sense of military knowledge when he laid out exactly how the US could have contained the threat of communism in Vietnam way back in 1965 without so many casualties. He is not without empathy, his laments of the massive loss of lives on both sides of the conflict reads as genuine, and he's an exceptional military strategist. But Billy Waugh spends most of his pages laying out his combat strategies and lustily reminiscing about the times he got to kill people and the times he SHOULD have killed people. He decided at an early age that he wanted to spend his life figuring out how to kill as many people as he could, militarily. Not as an upper level military decision maker, which he certainly could have been, but as an in the thick of it killer. Because he loves combat. He loves to kill the enemy with his own hands.

Part of me loftily thinks I should write Billy Waugh off as a cartoon and his book as so much jingoistic bull that no one should read lest it lulls them into thinking that killing other people can ever be good. But his is a fascinating account from a man who is like a wind up toy: Point him in a direction and he will KILL, KILL, KILL, then later tell you how his war buddy's leg was saved because maggots burrowed into his bullet wounds and ate the necrotizing flesh.

The unfortunate reality of any sanctimonious US militarily protected citizen is that none of us are in danger of Al Qaeda flying their flag over our Benghazi courthouse because there are thousands of people who, while maybe not as smart as Billy Waugh, are as willing to engage in combat as Billy Waugh. I'm not sure I want to discourage them. Sure, smugness feels good. You can't lose an argument if you take the high road. Killing People Is Bad, we all know that. It's very satisfying to sit on your couch in your non-bombed neighborhood and figure out all the world's problems. If only Washington DC would call you, then all war would cease! But Washington DC is never going to call you, sorry. They're all just jackasses, obviously. Billy Waugh had the good sense to never get overtly political in this book, and that decision made for a more enjoyable read.

Mainly I bought this book because the reviews promised gore and lots of it. The reviews did not disappoint. Carlos the Jackal only has a bit part in the book, which is a little disappointing, but I suppose if they had entitled it "Memories Of An Old Soldier Who Loves To Kill", it wouldn't have been as easy to market.
Read more
3 people found this helpful
Helpful
Report abuse

Steve Dietrich
VINE VOICE
5.0 out of 5 stars Tracking the Jackal and More - GREAT READ
Reviewed in the United States 🇺🇸 on January 26, 2007
Verified Purchase
Imagine that your Walter Mitty dream has come true and you are a star wide receiver playing in the 2007 Superbowl. You run to the huddle only to find a gray haired Joe Namath calling the signals and leading the team on a scoring drive. A dream, but for small teams of young Special Forces soldiers leading the anti-Taliban forces in southern Afghanistan is was very real. A soldier and operator who was a legend in their father's and grandfather's days is there in the middle of the fight.

Waugh, at age 72 is the middle of early days of the fight in Afghanistan, fighting not only the Taliban, but bone chilling cold in the thin air while hauling his share of gear. More than 50 years older than the young fellow soldiers, Waugh was a living, fighting legend. Few understand the impact made by mixed teams of Seals, Delta, Rangers, Air Force and CIA operators on the overthrow of the Taliban.

Understand that the literary review of this book was written by one of the testosterone deficient, panties all in a wad folks whose concept of self sacrifice is only cheating a little on their taxes. They are simply unable to comprehend two foundational truths, that they can write what they want, worship their own god, and speak their mind is created by people like Waugh and protecting their freedoms is a dirty, thankless task.

Do not expect to find the polished writing or the introspection of One Bullet Away, rather this is a story of doing, stripped of almost all emotion. Some of the reviewers questioned if the truth had been stretched. Most likely the bridging details were snipped by the CIA censors, in our interest. A google or amazon search for Billy Waugh normally points to many references to him, usually prefaced by "the legendary Billy Waugh."

Before Afghanistan there were years of fighting terrorism in the hellholes of the world. Waugh was tracking Osama almost a decade before 9-11. Later he was with the team that finally picked up the trail that lead back through a number of steps to legendary terrorist Carlos the Jackal.

Perhaps half of the book covers this lengthy search and then observation. Waugh captured the many months of frustrating waiting for the politicians in Washington to make decisions, especially when any hint that he was being tracked would have sent the Jackal on the run again to the safety of Iran or Iraq. That he was captured is a tribute to the CIA in both their ability to find Carlos and to keep the surveillance operation hidden and secret for months while the politicians fiddled, looking for a low risk way to get rid of Carlos.

In a very modest way Waugh also tells of getting leave from Walter Reed Hospital, where he was receiving care for very serious wounds, only to fly to Vietnam while on leave and ask to be sent back to the field. Despite the fact that he was still limping badly he was allowed to remain after badgering many in the chain of command.

The book has the feel the there was a lot more that was deleted during the CIA's review of the book. In some cases the deletion of information on methodology and technology leaves holes.

One wonders where do men Waugh come from, willing to devote 50 years to the service of their country, mostly in violence torn countries looking for bad guys and protecting the good guys.

My hope is that he will receive enough cooperation from the CIA to put together a few more great books.
Read more
11 people found this helpful
Helpful
Report abuse
See all reviews

irishpropheticart
3.0 out of 5 stars Interesting,wishing it had gone more deeper
Reviewed in the United Kingdom 🇬🇧 on July 17, 2019
Verified Purchase
Okay book.I read of his story from other Special Op books and so gave it a go.Elementary writing style.I wish the stories had gone deeper,understand a lot of the material is still classified.
Read more
Report abuse

Amazon Customer
4.0 out of 5 stars Spy world
Reviewed in the United Kingdom 🇬🇧 on May 24, 2016
Verified Purchase
Interesting book. Easy to read, not too heavy. If your into SF and spy stuff, can recommend highly.
Read more
Report abuse