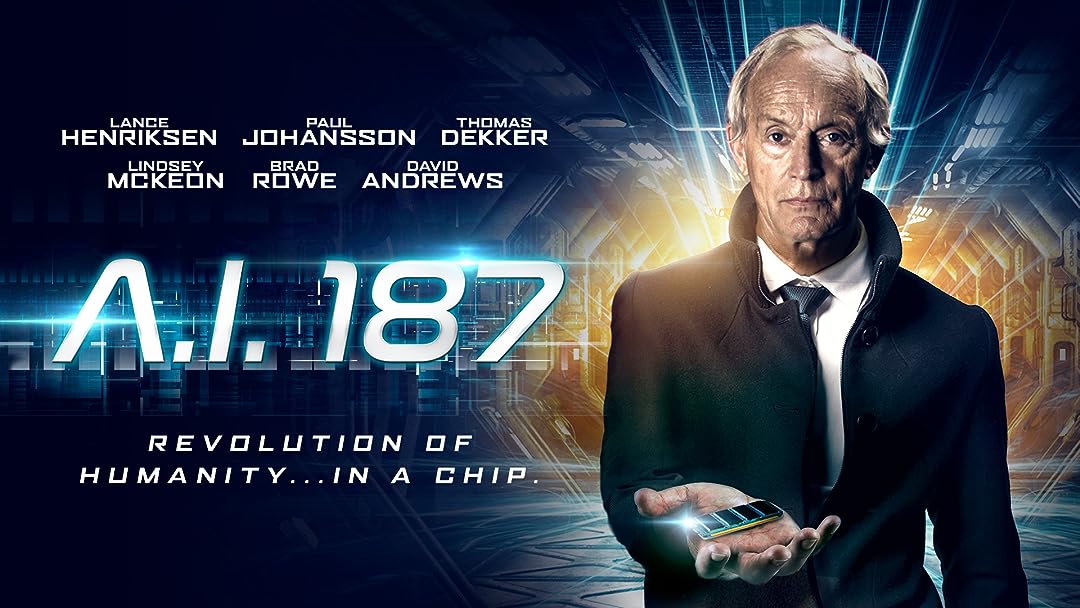 (32)
1 h 41 min202016+
The A.I. 187 chip which can revolutionize the inner workings of the human brain has been developed for the greater good, but falling in the wrong hands can be a weapon of mass destruction.

WayfinderReviewed in the United States on May 21, 2019
2.0 out of 5 stars
I shut this turkey off a 1:10. Couldn't take anymore
Verified purchase
This is one of the most boring, poorly-conceived, poorly-written, poorly-acted, poorly-directed films I have seen. Usually on turkeys like this I turn them off at 15 minutes or so, but the first 30 minutes are fairly interesting. Then I strongly suspect they changed the writers and directors, because the oh-so-slow discussions, the disjointed plotline, and the sense of "what exactly is going on here?" had me literally finding it difficult to stay awake. I finally decided I'd had enough of this yawner... even though there was only 30 minutes left of the film. I at least saved that 30 minutes.

This had all the feeling of a poorly-done high school play. No exaggeration. The only reason I don't give this one star is because I save that rating for films with "barbarian", "stewardess" or "cheerleader" in the title.

As a follow-up: I have no idea why Amazon rates this 16+. They've been doing that a lot lately. There's nothing in this film (at least, the first hour and 10 minutes) that anyone would find in the least bit objectionable. This movie is just plain goofy.

One last item: checked for this on IMDB. No listing. That's been happening a lot lately too. Is someone changing the names on these turkeys to prevent people from checking them out on IMDB before watching? That's okay... read these Amazon reviews. Trust the negative ones. This one's a stinker.

R. HaunReviewed in the United States on April 13, 2020
1.0 out of 5 stars
Did they edit out the story?
Verified purchase
Yes, I was bored. I like Lance Kenriksen, so I gave it a chance and blame it on Corvid-19. I am not sure exactly what this was about. What happened to the young man, Michael in the beginning. THen three years later. What happened in those three years? Was the dad dead or not? I couldn't tell what was a flashback and what was current. Who or what was MOM? Who were these two people and exactly what were they traveling around in? If you like movies that make no sense, do not conclude, and leave you scratching your head then this is for you. I mean, hey, I took the time to write a review. I was expecting something to come together, but it never did, or least it didn't for me.
4 people found this helpful

PattyReviewed in the United States on May 16, 2019
2.0 out of 5 stars
Confusing and disjointed. Made no sense, especially the ending.
Verified purchase
The beginning made no sense. Fast forward to 2018, I was still confused but then that's when the suspense began and then there was action then more suspense and then it got confusing again, especially the ending. Dumb way to end this movie unless a sequel is in the works. I thought the CGI was excellent because it flowed with the surrounding scenes so well that I couldn't distinguish between the actual scene and the CGI. I only have it 2 stars because the movie itself made no sense to me. The only good thing about this movie was the CGI & SFX. Other than that, I'm just glad I didn't have to pay to watch this because I'm a Prime member and this was in the Amazon Prime library. Watch at your own peril. I won't be watching it again.
6 people found this helpful

R.S.Reviewed in the United States on June 7, 2021
5.0 out of 5 stars
Very well done cheap production
Verified purchase
The story is very easy to follow and among the actors are a handful of once highly sought-after actors. Even though the backgrounds and some of the CGI were a bit blurry which made it rather unbelievable at times this was a very well-thought-out movie. With an ending was actually award-winning.

This movie deserves more praise than the cancel culture generation is making it seem. Like 3/4 of them never even watched the whole thing or even half of it and at least half of that stated it in their review directly that they could not watch it. Really sad this new generation can't learn or comprehend how to appreciate the little things. If it's not a video game or some social media they can't even pay attention for longer than 30 seconds...

All-in-all not a bad movie at all, if you have some imagination and willing to actually watch it!
One person found this helpful

Amazon CustomerReviewed in the United States on July 19, 2019
2.0 out of 5 stars
I'd pass unless you're desperate for something
Verified purchase
I'm normally very easy to entertain. This movie I struggled with. Seemed very disjointed. It was like they had a much longer story they wanted to tell, but chopped a ton of it out leaving many scenes without context. Acting was pretty good. CGI sets were a bit poor in many places.

If this was based on a book I'd want to read it. Like others have said it has a neat concept.
3 people found this helpful

Nathan Reviewed in the United States on September 8, 2019
1.0 out of 5 stars
broken montage of a plot line
Verified purchase
This movie has so many gaps in plot and set design you can use it to strain vegetables. The movie makers are too in love with green screen tech to develop sets which work into a logical flow with the plot. The audience spends time over questions in the holes of the dialogues and sets and thus the story is crippled.
One person found this helpful

Melody LeersReviewed in the United States on May 9, 2019
1.0 out of 5 stars
Waste of bandwidth.
Verified purchase
Good concept, garbage storyline, week effects. Stupid ending. Basically everything they could do wrong they did.
4 people found this helpful

Amazon CustomerReviewed in the United States on May 21, 2019
1.0 out of 5 stars
storyline did not flow.
Verified purchase
very little connection seen with the plot and the story being shown. it was like chopped liver with no onions. the acting was well done but no glue given for what was actually going on. confusion rules in this movie. to bad it could have been a good movie.
2 people found this helpful
See all reviews
Back to top
Get to Know Us
Make Money with Us
Amazon Payment Products
Let Us Help You
EnglishChoose a language for shopping. United StatesChoose a country/region for shopping.
© 1996-2022, Amazon.com, Inc. or its affiliates