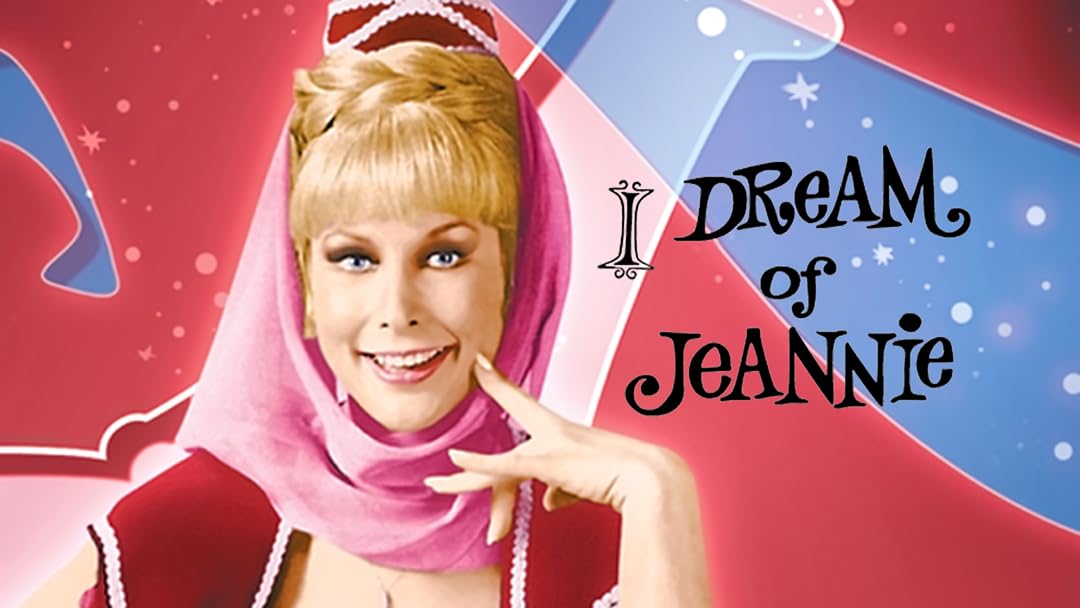 I Dream of Jeannie

(7)
1967TV-G
While stranded on a desert island after a spacecraft malfunction, astronaut Tony Nelson comes across a strange bottle lying in the sand. Imagine his surprise when out pops a real Genie! Dedicating her services to her newfound master, "Jeannie" follows Tony back home where she uses her dazzling abilities to try and please him...most often with the exact opposite result!

VinshinskiReviewed in the United States on August 20, 2013
5.0 out of 5 stars
Will never be another show like it.
Verified purchase
As much as I spend watching the tube I really hate the television of today. It is to be a fantasy like forum to like and laugh.

VinshinskiReviewed in the United States on August 20, 2013
5.0 out of 5 stars
Reminds me of growing up.
Verified purchase
Who in what family that has more than 1 child does not have this rivalry to get each other riled to the point of no return.

Dennis MooreReviewed in the United States on April 5, 2021
5.0 out of 5 stars
Hottest TV bombshell of all time.
The tale of two hunters. Both hunters had the same prey Major Anthony Nelson, boring dedicated spaceman who had way more excitement than he ever wanted once he rubbed the bottle on the beach. First hunter Alred E Bellows seeking to catch Tony at all times and at all costs. The good doctor would see Tony doing crazy things and Bellows seeing crazy things and yet never being able to prove what he saw and having emabarrsed himself at every instance to the point the doctor would doubt his own sanity. Bellows somehow kept trying in spite of epic failure to catch Tony. Genie the other Hunter wanted Tony all for herself despite Tony's many women callers who genie would find a way to dispose of. The sexual tension was glue that held the show together along with the foiling of bellows traps to expose Tony. Also Edens genies hotness, especially the way she said oh master. Genie said it in a way like she wanted to have your baby teasing males of all ages in her sexy genie outfit. Tony of course never really was the master,genie had him right where she wanted him. Roger Healy was Tonys goofy less square friend who was a lifetime bachelor who helped foil Bellows when he could. Note to Amazon: Make all the seasons free NOT JUST season one. If your a person who gets triggered by a show with the appearence of sexism with a scantily clad blonde bombshell genie trying to bag her man or a show that would make you pig drunk in a drinking game each episode by drinking each time she said master, than you may want to pass on this show.

Lawrance BernaboReviewed in the United States on February 4, 2004
4.0 out of 5 stars
Three episodes from near the end of &quot;I Dream of Jeannie&quot;
The three episodes collected on "Jeannie's Seeing Stars" come from late in the run of the classic television sitcom "I Dream of Jeannie." By this point Jeannie (Barbara Eden) is married to her master, Major Anthony Nelson (Larry Hagman), with best friend Major Roger Healy (Bill Daily) still in on the secret, which is more than can be said for Dr. Alfred Bellows (Hayden Rorke). None of these episodes would really be considered classics, but they are all certainly representative of the show:
"The Biggest Star in Hollywood" (Episode #106) finds Tony heading for Hollywood, so Jeannie prepares a goodbye that shows up in a mirror. The producers of "Laugh-In" are impressed by the trick and just have to have her on the show. Seeing yet another opportunity to become rich and famous, Roger becomes the manager for the Princess Armena, and promises to have her on the show. "Laugh-In" regulars Arte Johnson, Judy Carne, and Gary Owens appear in this average outing.
"Help, Help, a Shark" (Episode #134) features Jim Backus as General Fitzhugh, the longtime rival of General Schaeffer (Vinton Hayworth), who are competing for a spot in the All-Military Pool Championships. When Tony ruins Schaeffer's big game his only chance to avoid being sent to the North Pole is to play Fitzhugh in a rematch. The good news is that with Jeannie on his side, Tony is sure to win. The bad news is that Fitzhugh refuses to play with a woman in the room. Of course a large part of the pleasure here is the guest appearance by Thurston Howell III himself, which makes this the best episode of this particular trio.
"My Master the Chili King" (Episode #139) has Arvel (Gabriel Dell), who is Tony's cousin (twice removed) showing up and convincing Jeannie to invest $1,000 in his great recipe for Texas chili. She buys his story that Tony has agreed to endorse the product and promptly blinks up cans with his picture on them and gets them on the shelves in every grocery store in the area. The only problem is that NASA does not let its astronauts endorse products. A solid outing as far as such things go, the episode also has Dick Van Patten as the clerk at the market.
As is usually the case, the big surprise is noting how good of a comic actor Larry Hagman was on this show, before he made his mark as J.R. Ewing on "Dallas." Just watch how many times he gets to do an over the top reaction to Jeannie's antics in "Help, Help, a Shark." Just do not look for Barbara Eden's navel, because although it did get seen a couple of times, these are not those episodes.

KimberlyReviewed in the United States on November 12, 2003
5.0 out of 5 stars
The Best TV Sitcom From The 60's
I love I Dream Of Jeannie.I watch I Dream Of Jeannie on TVLand.I like this first episode in Black & White is when Major Anthony Nelson found Jeannie on the beach.I like it when Jeannie turns into pink smoke to get into her bottle & to get out of her bottle.And also like it when Jeannie blink herself to make herself disappear.Barbara Eden did a good job playing both Jeannie & her sister.And Larry Hagman did a good job playing Major Anthony Nelson.

Cindy AbshireReviewed in the United States on June 19, 2000
5.0 out of 5 stars
Jeannie does it again!
In these episodes, Jeannie charms not only the viewers,but famous actors from the 60's,including stars from the hit shows, "Laugh-In"& ""Gilligan's Island." This is truly some of my favorite episodes! A must see!
4 people found this helpful
See all reviews
Back to top
Get to Know Us
Make Money with Us
Amazon Payment Products
Let Us Help You
EnglishChoose a language for shopping. United StatesChoose a country/region for shopping.
© 1996-2022, Amazon.com, Inc. or its affiliates