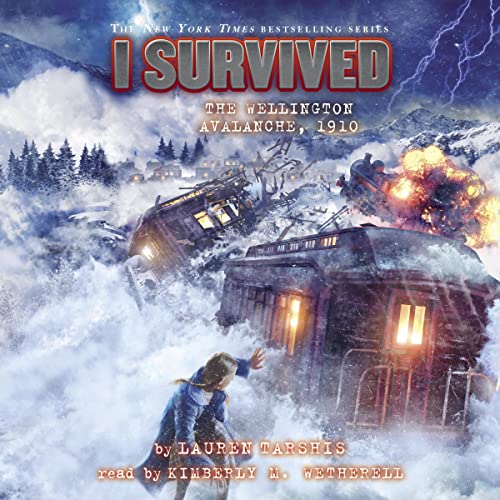 I Survived the Wellington Avalanche, 1910

The snow came down faster than train crews could clear the tracks, piling up in drifts 20 feet high. At the Wellington train depot in the Cascade Mountains, two trains sat stranded, blocked in by snow slides to the east and west. Some passengers braved the storm to hike off the mountain, but many had no choice but to wait out the storm.

But the storm didn’t stop. One day passed, then two, three . . . six days. The snow turned to rain. Then, just after midnight on March 1, a lightning storm struck the mountain, sending a ten-foot-high wave of snow barreling down the mountain. The trains tumbled 150 feet. 96 people were dead.

Mel
5.0 out of 5 stars Excellent books! Perfect for elementary school aged students! Educational and interesting!
Reviewed in the United States 🇺🇸 on January 21, 2023
Verified Purchase
Good for ages 8-12!!
My son has read every I Survived book by Lauren Tarshis book and can't wait for the next! He's learned so much from these books that then sparked curiosity to independently research the topics for more information. Definitely has helped fuel his love of reading and learning!!
Read more
Helpful
Report abuse

NickP
5.0 out of 5 stars Magnificent writing
Reviewed in the United States 🇺🇸 on January 3, 2023
Verified Purchase
When Lauren Tarshis spoke at a recent library event here, the line to talk to her afterwards went around the entire interior of the library. Now I understand why. Her ability to weave several themes into a gripping story using a school age vocabulary is truly remarkable. The backstory is inventive. No words are wasted.

Danny Haugen
5.0 out of 5 stars A gift
Reviewed in the United States 🇺🇸 on December 29, 2022
Verified Purchase
He reads more he likes the series
Read more
Helpful
Report abuse

Angie Marcum
5.0 out of 5 stars Great Books for kids that are not big into reading
Reviewed in the United States 🇺🇸 on December 5, 2022
Verified Purchase
I have a 10 year old boy that I struggle with when it comes to reading. Finally he has found a series of books that interest him.
Read more
One person found this helpful
Helpful
Report abuse

AJP
5.0 out of 5 stars Quality time with my 10 yr old
Reviewed in the United States 🇺🇸 on December 1, 2022
Verified Purchase
Such a great story. My son and I look forward to reading it together every night. Trying to get him more into reading and this series is helping!!
Read more
Helpful
Report abuse