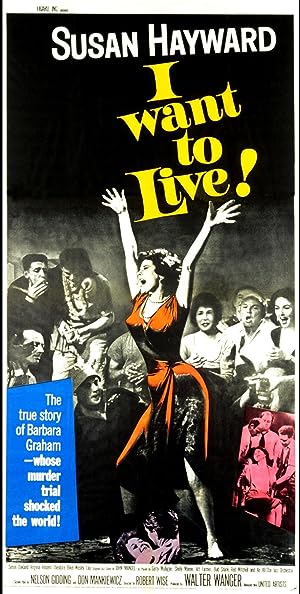 I Want To Live

(603)7.42 h 1 min195813+
Susan Hayward won the Best Actress Oscar for her shattering portrayal of a fast-living girl who suddenly finds herself facing the death penalty for a murder she didn't commit.

LohengrinReviewed in the United States on October 25, 2020
5.0 out of 5 stars
again 50 years later!
Verified purchase
I watched this movie as a youngster on TV. The dramatic title and subject matter were quite memorable. I caught up with it for a second viewing. I certainly didn't understand it all back then.
This is a great movie! Barbara Graham, portrayed by Susan Hayward, is a fast living women, convicted and executed for a murder she denied committing. Robert Wise (who also directed "Sound of Music") moves the majority of the movie at a fast pace. Only towards the end, during endless appeals and the mechanical preparations for the execution, does Wise slow the pace significantly. This is one of those black and white movies one can't imagine in color.
Susan Hayward gives us as performance of a lifetime, winning herself a deserving academy award. This was quite something!

MICHAEL STONEHILLReviewed in the United States on December 28, 2016
5.0 out of 5 stars
"I WANT TO LIVE!" IS ANOTHER EXCELLENT BLU-RAY PRESENTATION FROM TWILIGHT TIME
Verified purchase
"I Want to Live!"(1958) for all it's drama and tension is first and foremost a damning indictment of capital punishment. Despite the inaccuracies and liberties it takes with it's subject matter, director Robert Wise has crafted a brutal story that has lost none of it's power after nearly sixty years. Based on the last few years of Barbara Graham(a bad girl like no other) who at one time or another was convicted of prostitution, perjury, forgery and ultimately murder, there is no attempt whatsoever in the film to gloss over her crimes and make her sympathetic. The real Graham was not very likable that much is clear. Twilight Time has now brought "I Want to Live!" to Blu-ray for the first time and the results are once again outstanding. Originally released by United Artists, MGM(which owns the UA catalog) has provided an excellent print and Twilight has given the film a high bitrate(30.03). There are no vertical lines, dirt, torn or damaged frames and the B&W cinematography by Lionel Lindon is really on display. Whether in the dusty, smoke filled interiors of the jazz club that opens the picture or the final scenes in San Quentin's death chamber, "I Want to Live!" contains vivid images that will stay with you long after the film's harrowing ending. Close-ups are especially detailed, so much so, that you can easily see the make-up on individual actors and actresses. And speaking of actresses, Susan Hayward gives a career making(and Oscar winning) performance in a role that she was meant to play. Defiant, opinionated, and only concerned about having a good time no matter what the cost to her(or anyone else), Hayward is astonishing in the role of a lifetime. The emotions and torment she goes through in the final thirty minutes of the film as she awaits to die in the gas chamber is unbearable and hard to watch even after all these years. Hayward gets great support from Simon Oakland, Theodore Bikel and Virginia Vincent among others. The Audio(English DTS-HA MA 1.0) is crystal clear and free of any noise artifacts(hiss, pops, etc.). Jazz lovers will especially appreciate the music of Johnny Mandel which is one of the highlights of the film and is offered as an isolated score as part of the special features. "I Want to Live!" is 121 minutes(Aspect ratio: 1.85:1) and only contains the following subtitle: English SDH. Special features include an audio commentary and the original theatrical trailer. There is an informative booklet by film historian Julie Kirgo about the making of the film. The Blu-ray disc itself is housed in a solid transparent(clear) Blu-ray case (not an eco-cutout) similar to those used by Criterion. "I Want to Live!" is not for everyone and might even be hard to watch for some, but it has lost none of it's power and certainly comes recommended.
13 people found this helpful

S. WellsReviewed in the United States on February 15, 2019
5.0 out of 5 stars
Excellent film, however...
Verified purchase
I saw this film when I was a kid in 1958. This doesn't seem to be the same as the original film. I remember Barbara Graham, (Susan Hayward), pleading "I Want to Live" with her face against the cell bars. Maybe I missed it, but I didn't see it in this film. Still a tense film.

romantic ladyReviewed in the United States on May 12, 2015
5.0 out of 5 stars
Brilliant!
Verified purchase
Excellent film! Susan Hayward was brilliant as the real-life Barbara Graham, the tough girl and prostitute whose life went so bad. Fast-paced and tightly directed by Robert Wise, "I Want To Live!" is a rip-roaring film that wildly careens towards its tragic yet completely expected outcome. The moments leading up to Graham's execution are authentic and haunting. During the actual execution itself on June 3, 1955, Barbara Graham was defiant to the end; her last words were, "Good people are always so sure they're right."
8 people found this helpful

gReviewed in the United States on December 25, 2016
4.0 out of 5 stars
I WANT TO LIVE - MGM DVD
Verified purchase
I WANT TO LIVE - MGM DVD --- Great Older Flick. Susan Hayward puts in a great performance. Who da Thunkit - lol. She's given so many good performances. While the story strays from the real story somewhat it is still riveting & impactful. Many reviewers have already outlined the plot so I'll just add my thumbs up to the rest. The MGM print is decent. The newer KINO version dvd is better OR for the best of all you could get the Twilight Time Blu-ray. Definetly one for your older movie collection. Hope this helps you out
2 people found this helpful

Amazon CustomerReviewed in the United States on May 1, 2016
5.0 out of 5 stars
A brilliant polemic against the death penalty.
Verified purchase
Fans of director Robert Wise who are familiar with his lavish musicals and period films ("West Side Story", "The Sound of Music" and "The Sand Pebbles"), will be shocked by this stark, uncomprimising look at the tawdry and tragic life of convicted murderess Barbara Graham. It is Wise's finest work and one of the most brilliantly realized films in American cinema. It serves not only as great moviemaking; but, as a forceful polemic against the death penalty. Susan Hayward's performance stands as one of the very best in screen history.
7 people found this helpful

Byron KollnReviewed in the United States on July 7, 2002
5.0 out of 5 stars
fantastic drama, a tour-de-force by Hayward
Verified purchase
I WANT TO LIVE is a stunning film starring the amazing Susan Hayward in her Oscar-winning triumph. Director Robert Wise (THE SOUND OF MUSIC, THE SAND PEBBLES, STAR!) gives us an unforgettable film noir classic.
The film tells the true story of convicted murderess Barbara Graham (Susan Hayward - TAP ROOTS, VALLEY OF THE DOLLS) who was sentenced to the gas chamber for her part in the robbery and murder of an elderly lady. Professing her innocence right up to the end, Barbara is a sly, sardonic but always-likable woman who wins the heart of the audience. Hayward's tour-de-force performance as Graham is vastly rewarding. Her multi-faceted portrayal of Graham is truly amazing.
Highly recommended.
The DVD includes the trailer.
13 people found this helpful

joyReviewed in the United States on March 28, 2021
1.0 out of 5 stars
Not happy with story
Verified purchase
Great actress but the story at the end is agonizing. Not my idea of entertainment.
See all reviews
Back to top
Get to Know Us
Make Money with Us
Amazon Payment Products
Let Us Help You
EnglishChoose a language for shopping. United StatesChoose a country/region for shopping.
© 1996-2021, Amazon.com, Inc. or its affiliates