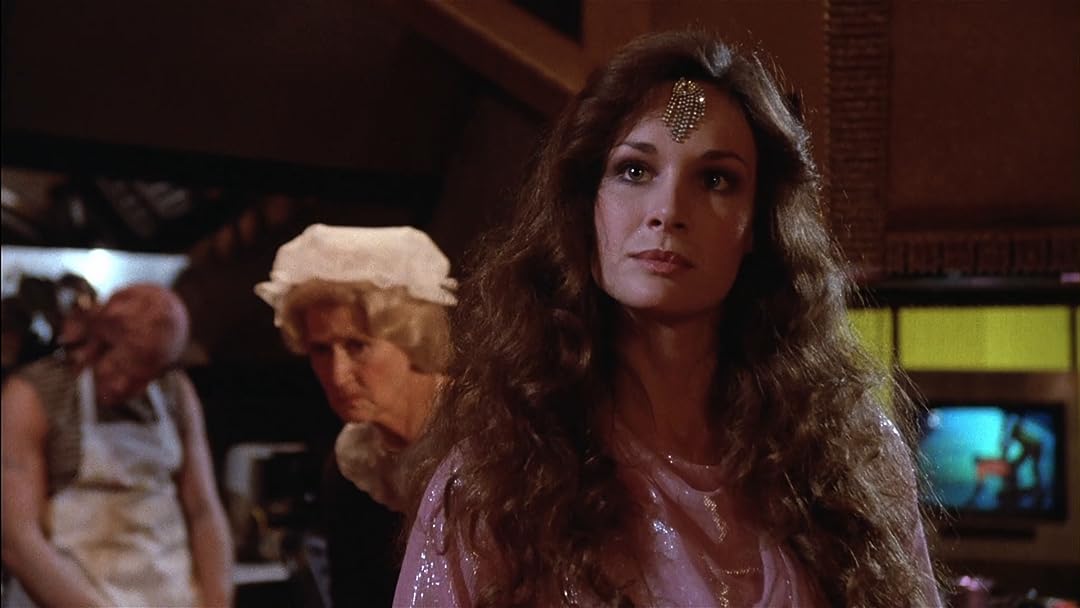 (2,959)
5.71 h 33 min1984X-RayPG
Robert Urich stars in this space adventure about a group of intergalactic pirates who steal precious water from the evil Templars to sell to a thirsty universe.

SilkReviewed in the United States on April 4, 2020
5.0 out of 5 stars
Stands the test of time and at least as good as A new hope.
Verified purchase
Some may say we who love this film are blinded by nostalgia, that its just another B grade sci fi made in the shadow of Star Wars.

Id argue compared to the blind fanboism of the star wars cult that ignore the fact A New Hope very much is itself a B grade film that just happened to catch on with the masses, we who love this are the true sci fi connoisseur.

This flick has it all. A fine and fun cast with great chemistry and real acting chops. Costumes that span the myriad fashion of human culture with a touch of techno-punk for the sci fi style. Practical effects, maybe not as good as used in star wars, but good luck finding an original version of those not tainted by the cgi face lift. The action scenes are fun, and filled with the classic swashbuckling style we hardly ever get in movies anymore.

Even the concept of galactic haves lording their wealth and needed resources over the have nots has only been proven ever truer and more timeless then ever. Its very easy to imagine such a thing on a galactic scale. We see water and resource profiteering all to often in the present day. Water itself can go for an insane amount in places suffering shortages and we here in the U.S. can barely appreciate that( outside of places like Flint, Michigan of course.

SidneyBroadsheadReviewed in the United States on July 31, 2020
1.0 out of 5 stars
I looked forward to this for 36 years, and for what?
Verified purchase
I missed seeing this in the theaters as a child. I found out that I really didn't miss anything.
The movie is aimless and confusingly bad. Robert Urich and Mary Crosby have no chemistry and the plot is boring. At first, it seems to be swashbuckling "Pirates in Spaaace!", but then it tries to be like Barbarella with a time-wasting Alien subplot. Angelica Huston, Ron Perlman and John Carradine are all briefly in it, but not enough to warrant a viewing. You could probably imagine a better movie yourself.

The robots in it (guys in clunky and bulky silver-plastic suits) are really bad. Considering that Star Wars was in 1977 and Star Crash was in 1978, they really are cheap and unimpressive. They all look alike, which is confusing when they're fighting each other. They also can't talk, which is even limiting in-universe. If they weren't a big feature in the movie it wouldn't matter, but the two sides constantly use them as cannon-fodder instead of fighting themselves.
5 people found this helpful

Dan S.Reviewed in the United States on July 4, 2021
5.0 out of 5 stars
If you don't laugh, you have no soul.
Verified purchase
This film is still one of my favorite classic comedies of the 80's. I first saw it when it came out in the theaters in '84 when I was a high school senior. I laughed my ass off. I still do. I remember a lot of my friends who had seen it, too, back then would go around saying, "The school has herpes," as a reference to one of our favorite lines in the film. Plus, the end sequence is the best parody of a certain classic sci-fi film and a famous cartoon show (I don't want to name any of it here to avoid spoiling it for anyone who hasn't yet seen it) and had me laughing with tears in my eyes the first time I saw it on the screen.
Oh, and another thing — I firmly believe that Matt Groening borrowed the look of the alien in the restroom for the "time-sniffing" aliens that appeared in several episodes of "Futurama".
2 people found this helpful

Christopher BrunatiReviewed in the United States on March 6, 2020
1.0 out of 5 stars
Godawful movie that could have been better.
Verified purchase
I don't know how this movie has such a high rating because it's friggin' awful. Put it this way, it scores 9% on Rottentomatoes. And it's all rather too bad because the basic concept is rather intriguing: A sci-fi spoof involving a future where the galaxy is controlled by evil overlords by limiting the water supply, and pirates who make a living stealing it from them and selling it to water-starved worlds. I suppose the movie is rather visually interesting at times, but generally the only time it's watchable is when either Mary Crosby or Angelica Huston are on the screen. Mary Crosby looks great, and both do a very good in their roles. But a great deal of the humor is utterly juvenile, and the movie seems very amateurish because it has the look, feel, and even sound of a TV sitcom, including the music, which sounds lifted straight from the A-Team or some other silly 80's adventure show, and not like a proper theatrical score at all (as compared to, say, "Spaceballs" which was made just a few years later and has the proper feel and sound of a theatrical sci-fi comedy). The editing is often choppy, the cartoonish sound effects are literally lifted from He-Man and other 80's kiddie cartoons, the robots are clearly made of foam and not metal, and the ending is astonishingly abrupt. Since this is such an obscure film, I can only surmise that its high ratings are from fanboys who loved it as a kid and have lost all ability to be objective about it. (I might ad that even as fourteen-year-olds, my friends and I regarded the movie as quite stupid even though we were huge fans of both science fiction and comedy.)
2 people found this helpful

Brian EReviewed in the United States on January 21, 2016
4.0 out of 5 stars
Ice Pirates Is Hilarious!!!
Verified purchase
I remember watching this in Theatres when it came out. When I saw this was comming out on blu-ray, I ordred it. What I like about it: The picture is far better, it's on Blu-Ray, & it's just as hilarious as when I originally saw it. What is disappointing about this release is that it is just a bare bones release. The only extra it has is just one of the trailers.
While I would love to see more features on this blu-ray edition, I love having it. Ron Pearlman, Angelica Houston, Robert Urich, And Mary Crosby are a great cast & work well together.
14 people found this helpful

Stephanie L BuchananReviewed in the United States on November 17, 2018
3.0 out of 5 stars
Entertaining
Verified purchase
I think this movie does take a certain type of preference to enjoy. It is a bit dated now, but in it's day it was outrageous. I watch it occasionally still, but the graphics seem so bad compared to today. I don't recognize most of the actors, but I think they all do a good job. If you like Space Balls, you'll probably like this one.
2 people found this helpful

Mike LewisReviewed in the United States on January 15, 2019
5.0 out of 5 stars
Hilarious 80s Cheese
Verified purchase
A forgotten early classic of Sci-fi/comedy. A little cheesy, a little quirky, but funny as hell. Imagine Battle Beyond the Stars as rewritten by Monty Python and Eddie Murphy, lol. Been looking for the DVD of this for years, and it totally took me back to my childhood.
2 people found this helpful

Jason CharlesReviewed in the United States on March 21, 2020
5.0 out of 5 stars
Greatest B Movie Ever!!!!
Verified purchase
My dad showed me this when I was a kid & I thought it was great. Mainly because of the fighting robots. As an adult it’s still a good movie as long as you get pass the worse special effects ever. Still my favorite.
2 people found this helpful
See all reviews
Back to top
Get to Know Us
Make Money with Us
Amazon Payment Products
Let Us Help You
EnglishChoose a language for shopping. United StatesChoose a country/region for shopping.
© 1996-2021, Amazon.com, Inc. or its affiliates