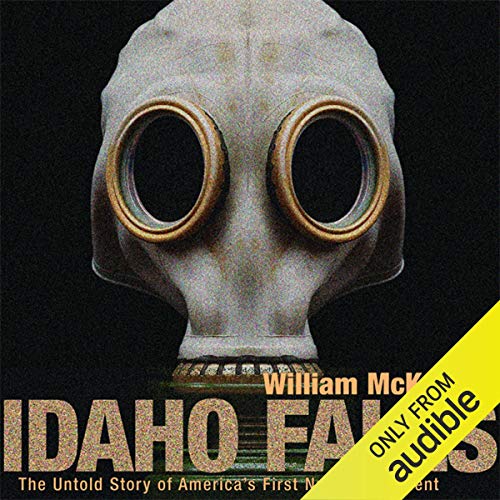 When asked to name the world’s first major nuclear accident, most people cite the Three Mile Island incident or the Chernobyl disaster. Revealed in this book is one of American history’s best-kept secrets: the world’s first nuclear reactor accident to claim fatalities happened on United States soil. Chronicled here for the first time is the strange tale of SL-1, a military test reactor located in Idaho’s Lost River Desert that exploded on the night of January 3, 1961, killing the three-man maintenance crew on duty.

Through details uncovered in official documents, firsthand accounts from rescue workers and nuclear industry insiders, and exclusive interviews with the victims’ families and friends, this book probes intriguing questions about the devastating blast that have remained unanswered for more than 40 years. From reports of a faulty reactor design and mismanagement of the reactor’s facilities to rumors of incompetent personnel and a failed love affair that prompted deliberate sabotage of the plant, these plausible explanations for the explosion raise questions about whether the truth was deliberately suppressed to protect the nuclear energy industry.

4.4 out of 5 stars
4.4 out of 5
264 global ratings
How are ratings calculated?
To calculate the overall star rating and percentage breakdown by star, we don’t use a simple average. Instead, our system considers things like how recent a review is and if the reviewer bought the item on Amazon. It also analyzes reviews to verify trustworthiness.
Top reviews

El Magnifico
1.0 out of 5 stars Less than 1 star actually
Reviewed in the United States on March 10, 2021
Verified Purchase
First the author obviously didn't consult any anthropological source before making the claim that no one could live in the area. There is plenty of archeological evidence to the contrary, especially in and around the Idaho National Laboratory.

Secondly the geographical name of the area of the SL-1 reactor site is actually the Snake River Plain, Not the Big Lost River Plain. I find it incredible that the author didn't even take the trouble to consult a map of the area.

The author at least did give the reader hope that aside from the terrible loss of the three young reactor operators plus the long lasting health effects from the radiation exposures of the recovery team, lessons were learned. And that is one if only the one good thing to come from SL-1.

This book may have some redeeming qualities, but it is not clear to me that there are not much better sources out there covering the SL-1 accident. Much, much better as in more accurate.

I put the book down without finishing it.
Read more
14 people found this helpful
Helpful
Report abuse

Museum Man
3.0 out of 5 stars Army nuclear accident.
Reviewed in the United States on June 9, 2019
Verified Purchase
I first heard of this watching an episode of Engineering Disasters and was intrigued enough to order this book.It does offer some details of the accident but in the end doesnt establish a real cause or place blame but neither does the publicly released report.The author does dip his toe into what I would call an amateur equivocal death analysis which should be avoided at all costs.Lots of rumor and speculation without much evidence.This was the same tack the Navy used to smear a young sailor killed in the USS Iowa explosion.So,if nuclear accidents intrigue you,buy it for that reason but dont expect too much.
Read more
14 people found this helpful
Helpful
Report abuse

Andreas Pechtold
5.0 out of 5 stars why nuclear energy will always cause problems
Reviewed in the United States on September 10, 2018
Verified Purchase
This story is a prelude to subsequent nuclear disasters. There will always be operators who have bad intentions like in this case or are not intelligent enough to understand the limitations of the machine they operate like in Chernobyl, or irresponsible financial managers who are not willing to spend money to secure emergency cooling pumps like in Fukushima.
The damage done in the SLT-1 incident was limited but for Chernobyl and Fukushima to name just a few disasters the damage was huge. No wonder that this technology that relies so heavily on intelligence and integrity of humans is no longer accepted by a lot of countries.
The book is well written and especially highlights the heroism of the rescuers.
Read more
6 people found this helpful
Helpful
Report abuse

Kindle Customer
5.0 out of 5 stars Lived There and Never Heard Of It!
Reviewed in the United States on April 29, 2021
Verified Purchase
This is a very well written book and very thought provoking! I am a native of Idaho and lived in Idaho Falls, as an adult for four years in the 80's. When I first bought the book in paper in early 2000's, it was the first I had ever heard of the nuclear accident. I had many friends who worked at INEL (IDAHO NATIONAL ENGINEERING LABORATORY) and several who had retired from there. Not one had ever mentioned anything like this.
Read more
2 people found this helpful
Helpful
Report abuse

MishMish3000
4.0 out of 5 stars Idaho Falls Is OK
Reviewed in the United States on May 13, 2020
Verified Purchase
The book was obviously, after the first few pages, written by a journalist. it would have been very helpful for the author to get more scientific feedback on his writing, and to avoid expressions like "nuclear explosion" when what was described was actually a hydrogen explosion. But, having said that, it's a good intro to the topic.
Read more
3 people found this helpful
Helpful
Report abuse

P. Ward
4.0 out of 5 stars Fascinating Story of An Incident Forgotten by Many
Reviewed in the United States on July 18, 2021
Verified Purchase
Over the past year I have become very interested in the story of Chernobyl, a horrific accident that took place half way around the world from me. I was intrigued by the events described in this book. I had no idea that something like this had occurred on U.S. soil. The incredible lengths gone through to try to give the victims proper funerals. The uncertainty as to what lead up to the action responsible for the explosion. So many details make this story well worth reading.
Read more
Helpful
Report abuse

Guy O. Whelchel III
5.0 out of 5 stars Nice book--good story--but definitely does not solve the mystery.
Reviewed in the United States on July 16, 2019
Verified Purchase
Mr. McKeown does a Journeyman's Job explaining: The technical aspects of a nuclear reactor for a layman; and the situation at Idaho Falls in January 1961. Unfortunately as the three spouses knew nothing about their own husbands (not even a picture of any appears in the book); and with material that appears only partially de-classified to date--neither the author nor anyone else has any real understanding of why the reactor blew up (ignorance; stupidity; mutiny; technical failure--maybe some combination).
Read more
One person found this helpful
Helpful
Report abuse

William
5.0 out of 5 stars Amazing true story
Reviewed in the United States on January 5, 2019
Verified Purchase
This is an amazing story of events that tell how a disaster unfolded in Idaho Falls!

It is better than other books I have read that cover this topic and I love rereading this when I get into the mood of atomic energy.

It's a great read by an intelligent author.
Read more
2 people found this helpful
Helpful
Report abuse
See all reviews

Amazon Customer
5.0 out of 5 stars Fascinating History
Reviewed in Canada on September 8, 2017
Verified Purchase
Detailed insight and mystery about an event most people have never heard about. Very insightful.

History and science as told by a master storyteller.
Read more
Report abuse

Annomous
5.0 out of 5 stars Insightful
Reviewed in Canada on May 22, 2015
Verified Purchase
I grew up in Idaho Falls, and I am a thyroid cancer survivor. Radiation mostly likely contributed to my cancer, and radioactive iodine was used to treat my cancer.
Read more
Report abuse

Redhouseluv
4.0 out of 5 stars Four Stars
Reviewed in the United Kingdom on December 23, 2016
Verified Purchase
Great book, as described, well told and happy to recommend
Read more
Report abuse
See all reviews
Back to top
Get to Know Us
Make Money with Us
Amazon Payment Products
Let Us Help You
EnglishChoose a language for shopping. United StatesChoose a country/region for shopping.
© 1996-2021, Amazon.com, Inc. or its affiliates