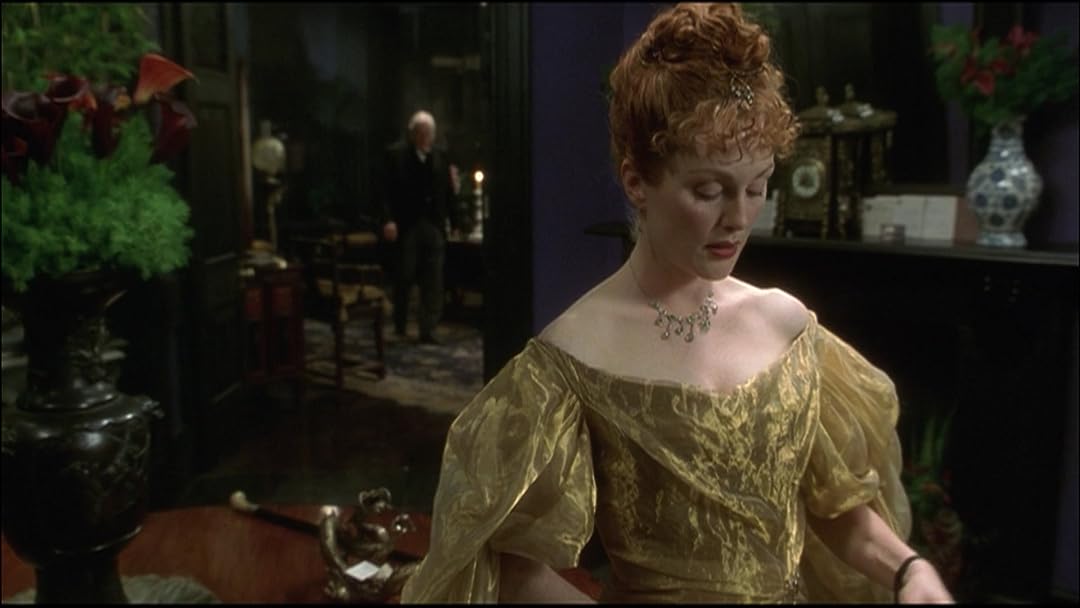 (856)
6.81 h 38 min1999PG-13
The youthful indiscretions of a successful politician come back to threaten his career and marriage when he's blackmailed by an unscrupulous woman.

I'd like to add that this adaption is brilliant, the acting is superb, and the sets are gorgeous. It is, thanks to Wilde, an absolutely ideal comedy. Couldn't be much better. We will watch it again.

SeamasterReviewed in the United States on July 29, 2020
5.0 out of 5 stars
Oscar Wilde at his comedic best
Verified purchase
If you're looking for intellectually challenging stage drama, best go see some Chekhov. "Husband" is more a Wildean festival of quips...many deftly delivered by the wonderful Rupert Everett. Those who appreciate Wilde's quick-fire quips, snark and relatively uncomplicated plots will enjoy this drawing-room comedy, which is shot in some very richly-appointed English drawing rooms..Downton Abbey style.
And, if you like Everett in this (and you will), be sure to catch his performance in the 2002 film version of Wilde's "Importance of Being Earnest" with Colin Firth and, yes, Reese Witherspoon, where Everett plays Algernon with the perfect balance of ennui, dissipation and wit.
One person found this helpful

Hands On EquineReviewed in the United States on January 16, 2020
5.0 out of 5 stars
Fun for Wilde fans
Verified purchase
This is a film adaptation of an Oscar Wilde stage play. It's very clever and features a stellar cast. I've seen it about a half dozen times and never tire of it. The sets are gorgeous too. I highly recommend it for Wilde fans, people who like British drawing room comedies, and those who appreciate the time period around the turn of the century.
5 people found this helpful

Miles D. MooreReviewed in the United States on September 27, 2009
5.0 out of 5 stars
The more things change, the more they stay the same.
Verified purchase
Oliver Parker's film of Oscar Wilde's "An Ideal Husband" demonstrates that Wilde's epigrams have lost none of their witty sting, and that his observations on society remain as profound and sagacious as they were more than a hundred years ago. Societal customs and mores may have changed enormously, but human nature has not. Wilde's themes of political skulduggery and financial swindling at the highest levels of society are all the more pertinent today, and the theme of dark secrets between men and women is as old as Aristophanes and as new as the latest rap song. All of this roils beneath the elegant, creamy surface of Wilde's story, brought to life in this film by a sterling cast amid the most sumptuous photography, costumes and set design imaginable.

Unfortunately, the themes of dark secrets and societal hypocrisy had enormous echoes in Wilde's own life. Parker creates a deep poignancy in the film in a scene portraying Wilde himself taking a bow after a rapturously received performance of "The Importance of Being Earnest." A caption at the beginning of the film tells us the action takes place during the London social season of 1895, which in real life was the exact time Wilde was sent to Reading Gaol. Wilde's appearance in the film can only be seen as a lament for what might have been, if Wilde had never met Bosie or read Queensberry's card.

The video transfer on the DVD is crisp and beautiful; however, there is very little in the way of extras, except for a short featurette about the making of the film. In the featurette, however, there is an amusing glimpse of Rupert Everett filming a scene in which his feet apparently would not be visible in the finished film. He is wearing impeccable white tie...and running shoes.

azindnReviewed in the United States on July 22, 2001
5.0 out of 5 stars
Well Done, Oscar!
Verified purchase
Wit, style, and an understated sense of comedy make The Ideal Husband a film every library should include. Rupert Everett as Lord Goring is idle, rich, and devastatingly handsome -- and, he is single. Every woman in London should be lined up outside his door, but then, that would be a Hollywood movie instead of a perfect British comedy of errors. Oscar Wilde had no match when it came to writing drawing room comedy about the foibles of the class conscious Brits in the 19th century. This film gives a fine lesson of how comedy does not have to be falling down slapstick nor cretin teenage fart humor to be successful on screen. It is elegant and riotous.
Jeremy Notham is Robert, an ambitious and rising politician with a secret in his past. Cate Blanchett as Gertrude, his Lady wife is above reproach with an inflexible sense of self-richousness of others. With Minnie Driver and American Julianne Moore superbly cast against type in the role of the the dubious Mrs. Cheevly, this cast perfectly translates Wilde's humor to screen. It is Rupert Everett however, who carries the film with a performance that should have won him more recognition than it did. Overall, The Ideal Husband is one of the best ensemble performances of the year. Visual settings convey the Victorian sensibility without squeeky clean idealism that plagues many of the Ivory/Merchant productions. I saw this film in the theater when it first opened and knew then it was going to be successful because it presented a story we all could identify with even after a century. Good writing never goes out of style. Great writing is forever. Well done, Oscar!
8 people found this helpful

Elaine CampbellReviewed in the United States on July 27, 2002
5.0 out of 5 stars
RUN, DON'T WALK, FOR THE VHS/DVD OF THIS FILM!...
Verified purchase
One may wish to watch this movie many times, for there are witticisms galore, so much so that one can hardly keep up with them. While laughing at one, another takes place, and so on. The dialogue is glittering.
This is the greatest production of an Oscar Wilde play I have ever seen, and leaves me on pins and needles waiting for the release later this year of The Importance of Being Earnest because it also stars an actor who seems born to perform in Wilde's plays/movies: Rupert Everett.
The performances: wonderful all. Rupert Everett's work nears the genius level. Jeremy Northam as a not-so-perfect parliamentarian is great. John Wood as his father stands out. And there are the ever-so-essential ladies: Cate Blanchett as Northam's wife (would you believe she is Australian?), who believes she has a perfect husband. Julianne Moore as one of the most charmingly wicked women ever to grace the screen (would you believe she is from North Carolina?), and the very strong presence of Minnie Driver (yes, she actually is from England). All together, they create an effervescent champagne of a film.
The perfect find out they are not so perfect. The expecters of perfection find out they themselves are also not so perfect. Love finally lowers its standards to include the imperfection of the beloved. Even the loser at evildoing turns out to have an unexpected side to her. This is the film's theme. The actors and the director of this film, however, ironically bring this film close to, if not at, the peak of perfection.
The final scene is an ode to joy. Watch it and have fun!
58 people found this helpful

harborsparrowReviewed in the United States on January 2, 2021
5.0 out of 5 stars
Gorgeous and witty; bravo!
Verified purchase
Beautiful actors, Oscar Wilde witticisms, extremely well done period piece. I rewatch this for comfort every once in a while. To understand the plot, it is necessary to pay attention to every detail and every thing each character says--nothing is superfluous.

Anne S.Reviewed in the United States on May 30, 2022
5.0 out of 5 stars
Delightful
Verified purchase
As an uber fan of Oscar Wilde, this adaptation doesn't disappoint. Casting is terrific, and the dialog sparkles. Enjoy!!!
See all reviews
Back to top
Get to Know Us
Make Money with Us
Amazon Payment Products
Let Us Help You
EnglishChoose a language for shopping. United StatesChoose a country/region for shopping.
© 1996-2022, Amazon.com, Inc. or its affiliates