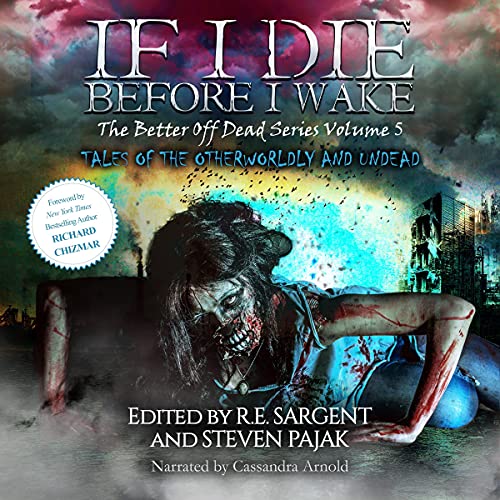 If I Die Before I Wake: Tales of the Otherworldly and Undead (The Better Off Dead Series, Book 5)

It took its last breath, you watched the dirt being shoveled onto its coffin, yet there it is, standing before you, staring you down like you’re its next meal. It’s vicious and it’s evil and even though you know - you’re absolutely positive - that the abomination before you should be dead, somehow it’s not, and its ungodly eyes are focused on you.

The Otherworldly and Undead are out there and they are coming for you. When you run - and oh, will you run - you don’t need to be the fastest…you only need to be faster than the person beside you - at least until there is no one else left. Join us for the most terrifying stories of Otherworldly and Undead beings as they stalk and torment the living, feeding off their souls and their flesh before recruiting them to eternal damnation.

4.4 out of 5 stars
4.4 out of 5
20 global ratings
How are ratings calculated?
To calculate the overall star rating and percentage breakdown by star, we don’t use a simple average. Instead, our system considers things like how recent a review is and if the reviewer bought the item on Amazon. It also analyzes reviews to verify trustworthiness.
Top reviews

Mark Mackey
5.0 out of 5 stars Review
Reviewed in the United States on June 17, 2021
Verified Purchase
Like the previous two anthologies produced by these publishers I read, the stories within If I Die Before I Wake Volume 5 were pretty unique and interesting. Enough to want to read more of these anthologies.
Read more
2 people found this helpful
Helpful
Report abuse

Angela Ingram
5.0 out of 5 stars Great collection of stories
Reviewed in the United States on June 27, 2021
Verified Purchase
I have enjoyed every book in the series and this one is no exception. This book contains great horror stories by some obviously very talented authors. My personal favorites are The Magenta Room and Til Death do us Part.
Read more
One person found this helpful
Helpful
Report abuse

barbara pittman
5.0 out of 5 stars Great collection of stories
Reviewed in the United States on October 5, 2021
Verified Purchase
I really enjoyed this anthropology of horror stories. They interesting, scary and a bit weird which makes it so great. The authors did a great job and I was able to plow through them all in about 2 days. I will be anxiously awaiting the next book in the series.
Read more
Helpful
Report abuse

Bbooks
5.0 out of 5 stars Outstanding. Any fan of horror needs to read this!
Reviewed in the United States on June 20, 2021
Absolutely wonderful-as usual.

So I must say: hats off to all the writers. I also want to say if you are reading this and are an individual who likes and appreciates horror novels, do yourself a favor and add this great anthology.

I have been a fan of the Better Off Dead Series from the beginning. I have never read one anthology I have not liked and appreciated and the winning streak continues with this one.

Tales of the Otherworldly and Undead-scary, eerie with stories that differ so much from each other, all well written, all dark and dangerous, pulsing with horror and intensity-top notch from beginning to end.

Reading these anthologies always feels like receiving a jolt of energy. It's stronger than any cup of coffee-LOL. I always feel even more awake after completing a volume.I feel energized. That is one thing I love about these anthologies-they are never dull-never.

And all the stories are great and vary so deeply from one another. I am one of those people who likes a good plot with my horror-depth and soul and edge. All the stories have that and more. Are you sold on them yet?

I will mention a few but if any authors see this and I have not mentioned yours, please know I loved all of them. It is just that it is after 2:AM as I write this review. What can I say? I'm a night person!

Granny's Gift-Renee M.P.T. Kray-This story was extraordinary. I cannot believe how deeply I was drawn in. The main protagonist mattered to me and I felt compassion toward her. This story also had the pleasure of giving me the creeps while also making me feel. That is the best kind of horror!

For Better or For Worse-R. E. Sargent- What can I say? This is my favorite. I started reading this writer's work quite awhile ago and have never been let down. This story is my favorite by him and that is saying something because I love all his work.Reading this, was a fascinating experience. I could visualize everything so deeply. And I could not stop thinking: how does your mind work? How did you come up with this?

Croaker-Barry Charman-This story is indescribable. It is one of the most unique stories I've ever read. Fascinating and inscrutable.

The show must go on-Bridgett Nelson-Bridgett, you are a star. I happen to be a Phantom of the Opera fan so I love reading about theaters. This story was haunting. I adored it.

So thank you authors, for the great works and the great stories. I have come to look forward to them and rely on them to make me smile and that's a good thing, in these tough times. I also must say I cannot WAIT until the release of the anthology on ocean creatures since I have been obsessed with the sea since girlhood.

Colin Leonard
4.0 out of 5 stars A smorgasbord of gore and ghouls.
Reviewed in the United States on June 15, 2021
If I Die before I Wake certainly spans a broad spectrum of tales of the undead. The scares here are spawned from dark magic, a few from outer space, Hell itself and more. There is a fun, pulpy tone to a lot of the collection which works better in some tales than others. The three standouts for me were as follows:
Made in Hell for its mashup of mafia, prison and the occult making for some quite memorable imagery.
Curiosity, which has a teasing, Twilight Zone style and excellent characterisation.
From the Red Dirt does a tremendous job of setting us in Depression era America. The voice of the young protagonist is wonderfully drawn and the story is tense and moving. A really excellent piece.
Thanks to Sinister Smile Press for allowing me to read an ARC of the collection
Read more
2 people found this helpful
Helpful
Report abuse

Amazon Customer
5.0 out of 5 stars Nice Collection
Reviewed in the United States on June 17, 2021
I really enjoyed the variety of stories included. The pacing and flow from story to story was nice. If you enjoy the Horror genre and are looking for a collection to be exposed to different authors, this book would be a great start.

I haven't read the first four books, but after reading this one they're all on my "to-read" list.
Read more
One person found this helpful
Helpful
Report abuse
See all reviews
Back to top
Get to Know Us
Make Money with Us
Amazon Payment Products
Let Us Help You
EnglishChoose a language for shopping. United StatesChoose a country/region for shopping.
© 1996-2021, Amazon.com, Inc. or its affiliates