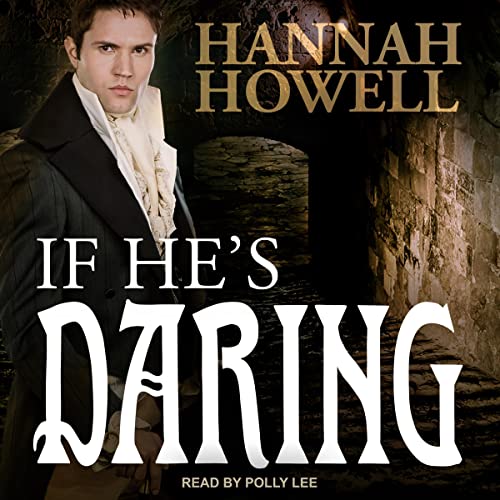 A young widow turns to a man of otherworldly abilities to save her son in this paranormal Regency romance by the New York Times best-selling author.

Stealing a stranger's carriage is the second most reckless thing Lady Catrin Gryffin de Warrene has ever done. The first is succumbing to her powerful attraction to the carriage's owner. Catrin has heard the rumors about Sir Orion Wherlocke's family and their otherworldly gifts. He's the one person who can keep her son and his inheritance safe from her late husband's ruthless brother. But it may be too late to protect herself.

Orion is facing the worst kind of danger a man of his ilk: a woman he can't walk away from. Catrin is an intoxicating blend of innocence and sensuality, and for the first time, seduction is far more than a game. But her beauty and fortune have made her a target. And now he must risk everything he's known in pursuit of everything he's ever longed for.

4.7 out of 5 stars
4.7 out of 5
504 global ratings
How are ratings calculated?
To calculate the overall star rating and percentage breakdown by star, we don’t use a simple average. Instead, our system considers things like how recent a review is and if the reviewer bought the item on Amazon. It also analyzes reviews to verify trustworthiness.
Top reviews

Remsing
5.0 out of 5 stars Wow - kidnappings, new-found family and evil lurking! Great read!
Reviewed in the United States on February 4, 2021
Verified Purchase
Loved this book. Catryn returns from shopping to find her brother-in-law, Morris,has kidnapped her five year old son, Alwyn! In a hurry to catch up with Morris, she rides off on her mare, but she goes lame and Catryn quickly “borrows” a carriage owned by Orion Wherlocke. Unfortunately Catryn doesn’t realize Orion’s son is in the carriage until she stops to rest the horses. By that time, Orion is hard on her tail. . .so begins the harrowing tale to retrieve Alwyn and find a way to stop Morris. Ultimately Orion and Catryn find their HEA, but learn some vile truths about Catryn’s marriage along the way. Great reading!
AJ R
Read more
3 people found this helpful
Helpful
Report abuse

TracyJane
4.0 out of 5 stars Very Good
Reviewed in the United States on October 13, 2014
Verified Purchase
I will be honest - I am not a big fan of heroes with illegitimate children. I would agree that it is probably more realistic to think that these rakish heroes who have slept their way thru the females of England would have at least one illegitimate child than to believe that they don't. But I still don't like it.

That said - I loved Orion and Catryn's story. I especially liked Orion's internal battle with his attraction to Catryn.

This book introduces us to yet more Wherlocke/Vaughn males and catches up with some old friends. I sincerely hope this series is not at an end. I want Modred, Iago, Bened and Gethin's stories!! Hopefully, they don't have a gaggle of children too.

Even though I am not a fan of heroes with illegitimate children, I really enjoyed the children in this book - Giles and Alwyn were priceless.

I thought the story moved along at a good pace and the writing was excellent. While I am not usually a fan of paranormal book - I have found this series fascinating and very well done - the paranormal is not over the top and doesn't distract from the romance.

I would recommend this book to anyone - you don't have to read from the beginning of the series to enjoy this book. But it would give you a better understanding of the family if you read the books in order.
Read more
4 people found this helpful
Helpful
Report abuse

BOO
5.0 out of 5 stars The more the merrier.
Reviewed in the United States on July 4, 2021
Verified Purchase
There was nothing to dislike about this book.
The plot was a new one and very intresting.
The characters were all very intresting.
No extended epilogue.
Extended epilogue should be banned.
If the author has more to write about the
story just write another chapter.
A cliffhanger is favourable if there is a
second book coming.
Read more
Helpful
Report abuse

Sally Jo Mikush
5.0 out of 5 stars It is such a fun and funny book.
Reviewed in the United States on January 27, 2021
Verified Purchase
I love a book that is so much fun to read. Even though this book has so much heartache, it also has a lot of humor. I felt so bad for both Catryn and Orion and they deserve their happy ending. The gifts this family has just adds to the fun and keeps you guessing what will happen next.
Read more
2 people found this helpful
Helpful
Report abuse

Anita Cantrell
5.0 out of 5 stars Great read. Have the entire series up till now ...
Reviewed in the United States on August 31, 2015
Verified Purchase
I've been waiting a long time for another Hannah Howell novel about the Wherlocke and Vaughn families. AT LAST!!!!! Great read. Have the entire series up till now in paperback. They are on my keeper shelf and have been re-read a number of times. Now I have Nos. 6 & 7 in e-book format. GREAT! More room on my shelves, excellent stories. Humor, adventure, a little paranormal, romance, danger, ec. Just a good fun read, every one of them.
Read more
2 people found this helpful
Helpful
Report abuse

SamD
4.0 out of 5 stars I like it
Reviewed in the United States on January 22, 2015
Verified Purchase
Here's the thing. Reviews for this book were bad. And I've seen this in other authors. Expecting an author to change her style to suit the reader. When you buy an author you've read before you know her style. Don't complain when it's not different. This was typical Hannah Howell in her Wherlocke/Vaughn series. Not her best I like this series but prefer the Murray's or MacNachton' s. This was a good book. I was glad to see Orion get his own story and it did followed her typical style with them but that's why I buy Hannah Howell and I liked it. And it did have a twist I wasn't expecting from her norm. It was nice change. All in all a good read and follows the series.
Read more
2 people found this helpful
Helpful
Report abuse

Anna Snow
5.0 out of 5 stars Fantastic!
Reviewed in the United States on December 31, 2014
Verified Purchase
I absolutely loved this book!
It was well written and detailed. The characters were unique and the story moved at a fast pace.
Orion and Catryn were easy to love and I completely adored the children Giles and Alwyn.
There's also a character I'd like to see more of, or at least learn a little more about, Aeddon Vaughn. He's done some horrible things, but it appears there was much more to the story.
All in all, this is one of my favorite Hannah Howell books, and I can't wait to see where the series goes from here. Hopefully we'll be seeing another book in this series very soon.
Read more
2 people found this helpful
Helpful
Report abuse

Amazon Customer
5.0 out of 5 stars Fabulous
Reviewed in the United States on August 7, 2020
Verified Purchase
I love this series by Mrs Howell. I love all her books but this series has become my favorite one.
Read more
3 people found this helpful
Helpful
Report abuse
See all reviews

victoria atchinson
5.0 out of 5 stars Wow amazing
Reviewed in the United Kingdom on October 8, 2014
Verified Purchase
I was really looking forward to this book after reading all the others in the series and I was not disappointed after meeting orian before it was nice reading him fall in love and the leading lady was brilliant it was also nice to read more of the family and there special gifts like her 5 year old son who speaks to a very colourful spirit that has you laughing out loud at some of things the boy repeats in a nut shell this book has it all the passion love laughter and enough excitement to keep you reading can't wait for the next in the series love this family and would like to read about the poor modred the duke I feel his would be a great book xx
Read more
Report abuse

Kindle Customer
5.0 out of 5 stars Good
Reviewed in the United Kingdom on January 23, 2019
Verified Purchase
I liked this book so much that I got the rest the sersis.
Read more
Report abuse

Annie31
5.0 out of 5 stars So so good
Reviewed in the United Kingdom on October 7, 2014
Verified Purchase
I love these (if) books, each has a wonderful story that's good as a standalone but great when you have read the series. I hope Hannah Howell keeps writing this series of books. After all they are a big caring family.
Thank you Hannah
Read more
One person found this helpful
Report abuse

Kindle Customer
5.0 out of 5 stars Great book really enjoyed reading more about the Wherlocke clan.
Reviewed in the United Kingdom on October 9, 2014
Verified Purchase
This is Orion's story of how he meets the woman he will eventually mary even though they have to rescue her son from his uncle who has kidnapped him in order to make his mother marry him ...
Read more
Report abuse

S. D. Whitethread
5.0 out of 5 stars Worth a read.
Reviewed in the United Kingdom on June 26, 2018
Verified Purchase
A great read. Very original, with a good plot. The series is good as well.
Read more
Report abuse
See all reviews
Back to top
Get to Know Us
Make Money with Us
Amazon Payment Products
Let Us Help You
EnglishChoose a language for shopping. United StatesChoose a country/region for shopping.
© 1996-2022, Amazon.com, Inc. or its affiliates