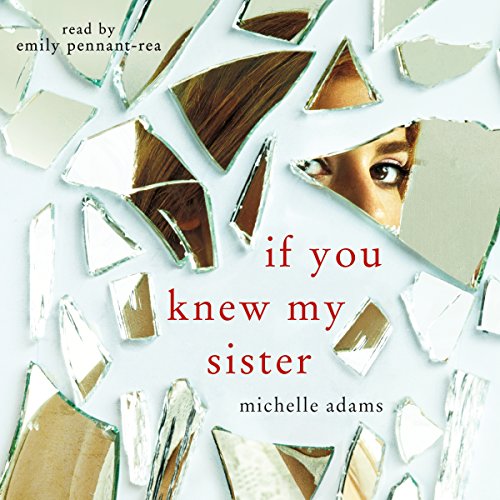 If You Knew My Sister

If You Knew My Sister is a highly anticipated psychological suspense audiobook from debut author Michelle Adams.

First there was the Robert Kneel incident.

Then what happened to Margot Wolfe.

And now she's found me again.

Dr. Irini Harringford was given away by her parents just before her fourth birthday. Although she has spent her whole life trying to convince herself she doesn't need them, deep down Irini longs to understand why she was abandoned, while her parents kept her older sister, Elle.

So when Elle gets in touch with news that their mother has died, Irini reluctantly agrees to return to the family home. But she is ill at ease. She and Elle are not close. Irini knows only too well what Elle is capable of. Inexplicably drawn to her enigmatic sister, yet terrified of the sway she holds, Irini tries to protect herself even as she is sucked back into her family's toxic web of secrets...and soon realizes that the past is more complicated than she imagined, and that her very future rests upon discovering the truth about why she was really given away.

Your audiobook is waiting!
Learn more about Membership
List Price: $25.51
You Save: $3.19 (13%)
By completing your purchase, you agree to Audible’s Conditions Of Use
Sold and delivered by Audible, an Amazon company

Amazon Customer
3.0 out of 5 stars Overall ok
Reviewed in the United States on November 5, 2019
Several pages were dark printed and unreadable
Images in this review

JG
5.0 out of 5 stars An Intriguing Story from International Author Michelle Adams
Reviewed in the United States on January 4, 2018
Verified Purchase
This introduction to Michelle Adams was a treat. All manners of storytelling are subjective, and fiction tends to be scrutinized by audiences that aren't always willing to welcome in something new, or something unique. Part of the thrill as a reader, for me, is to experience characters whose potential we don't know from an international writer whose potential we haven't yet realized. If You Knew My Sister gives us a peek into the workings of one woman's mind--the author--and her story that she elected to share with all of us. I regard her achievement as maintaining a mystery and letting us enjoy characters whose story we wouldn't want to experience in a non-fictional sense. But, as fiction? Yes, thank you. I think there are characters we root for, characters we identify with, grieve for, cringe away from, etc., as with any compelling story. I enjoyed the novel that Michelle offered us, letting us know the workings of her scientific and creative mind, and I look forward to her future works.
Read more
2 people found this helpful
Helpful
Report abuse

Christina
2.0 out of 5 stars Too repetitive-
Reviewed in the United States on February 28, 2019
Verified Purchase
Right from the beginning it was boring and repetitive, I just couldn’t care less what happened so I couldn’t finish it even though I figured it out from the first chapter, sorry I paid anything for it.
Read more
One person found this helpful
Helpful
Report abuse

Betty Kimpflein
3.0 out of 5 stars Interesting story
Reviewed in the United States on June 7, 2019
Verified Purchase
It is an ok book. Not as I would have expected. Strange sister experience
Read more
One person found this helpful
Helpful
Report abuse

Willa Woodfin
5.0 out of 5 stars Outstanding !
Reviewed in the United States on June 10, 2018
Verified Purchase
This story was filled with suspense and drama. The characters were described in such a manner, you feel as though you can relate with each one. Can't wait for your next book Michelle Adams
Read more
One person found this helpful
Helpful
Report abuse

Julie Guns
3.0 out of 5 stars Overall ok
Reviewed in the United States on November 5, 2019
Several pages were dark printed and unreadable
Images in this review

Virginia
5.0 out of 5 stars Five Stars
Reviewed in the United States on May 7, 2018
Verified Purchase
Loved it!
Read more
Helpful
Report abuse

JdP
4.0 out of 5 stars Awesome
Reviewed in the United States on November 10, 2017
Verified Purchase
Great book, some really good twists. The ending came too fast for me.
Read more
One person found this helpful
Helpful
Report abuse

Vyctoria Kranz
5.0 out of 5 stars Five Stars
Reviewed in the United States on June 23, 2017
Verified Purchase
Pulls you in right away.
Read more
Helpful
Report abuse
See all reviews

Clair_B
4.0 out of 5 stars An addictive read!
Reviewed in the United Kingdom on March 4, 2018
Verified Purchase
My Sister is one of those books that grabs the reader right from the start, from the opening paragraphs I started collecting unanswered questions which were frustrating and compelling at the same time! The book throws its reader into the action from the very first paragraphs when Irini receives a call in the early hours in the morning from her estranged sister, Elle.

The sisters couldn't be anymore different, Irini is an anaesthetist living in London with her long term boyfriend, Antonio. To all intents and purposes she's happy, however that isn't the full story as she is traumatised by the abandonment by her parents to her aunt and uncle at the age of three. She has never had any further contact from her parents and does not know the reasons as to why she was given away, as to why they chose to keep Elle rather than her. Elle on the other hand is still living in the family fold in Scotland, she is very beautiful but completely toxic, she uses men who seem to fall at her feet and generally treats people appallingly. It is for this reason that Irini has spent most of her adult life hiding from Elle so as not to get caught up in Elle's toxic world - as such, the early hours phone call is not welcomed and events start to spiral as Elle has once again found Irini.

The character development in this book is really good, straight away the reader understands the vulnerability of Irini and her ability to be influenced by Elle as she searches for answers as to why she was the one to have to go away. Conversely, Elle's character is terrifying! Her hold over Irini is instant despite Irini avoiding her for the last six years - there is a sinister undertone to Elle's narrative constantly throughout the book. Both characters are unpredictable which makes for a fantastic psychological read.

I think what makes this a stand out read is that it is a psychological thriller that focuses on the psychological side - and my goodness does Michelle Adams do this brilliantly well! There is no huge twist which is great because it didn't need it, the premise is simple, why did the Harringford's give Irini away, the plot to get the reader the answer is not - it is a multilayered plot which is gripping right through to the end. At the heart of My Sister is a story about relationships between siblings as well as between child and parent - and to what extent one will go to in order to protect as well as find out the truth.

My Sister is addictive through its unrealiable (and unpredictable!) characters which is extremely hard to put down! A fantastic read.

Mrs A Hunt
5.0 out of 5 stars Twists and turns
Reviewed in the United Kingdom on February 16, 2018
Verified Purchase
I really enjoyed this book.
It has a really strong story and believable characters.
I found it very easy to connect with the characters, but at times the author had them doing things that I had trouble believing they would such as returning to somewhere that held bad memories.
Being with someone who rejected you previously, but that is just a niggle, not really important
I definitely found it to be a page turner and read it in one sitting.
There are enough twists and turns in the story to make it hard to put down.
I loved it and highly recommend it.
Read more
One person found this helpful
Report abuse

mary jane
4.0 out of 5 stars Hard to put down
Reviewed in the United Kingdom on June 27, 2017
Verified Purchase
Enjoyed this book and found it hard to put down, there were places when I was frustrated at some of the very poor decisions made by the main characters but I suppose this is a sign that I was actually engaged with them as real people. Yet again a story of how parenting gone wrong can impact children's lives for ever. Made me reflect on mental ill health and wonder what is difference between mad and bad...
Read more
4 people found this helpful
Report abuse

Pauline Vernon
4.0 out of 5 stars Incredible at times but strangely compelling
Reviewed in the United Kingdom on December 4, 2017
Verified Purchase
I did like this novel, but strangely at times found it overwhelmingly unbelievable. Why would you return to a house you had been rejected from at an early stage in your life? Because your sister, whom you spent your lifetime 'escaping' said you should. There were many elements to this book that I didn't like but in another way I also found it strangely compelling and couldn't put down till the end. It did get better though and the ending was quite gripping. I wouldn't read it again but I wouldn't discourage others from reading it either.
Read more
Report abuse

Mrs M
4.0 out of 5 stars Unique and gripping!
Reviewed in the United Kingdom on August 23, 2017
Verified Purchase
This book is so gripping! Slightly slow start but really gains momentum and you just cannot guess where the story is going to go.
Some minor sloppy parts (the role of the police) and sometimes the plot became a little mixed, but overall really strong character development that made me empathise with characters I didn't even like! Fantastic book, unique story and would recommend
Read more
Report abuse
See all reviews