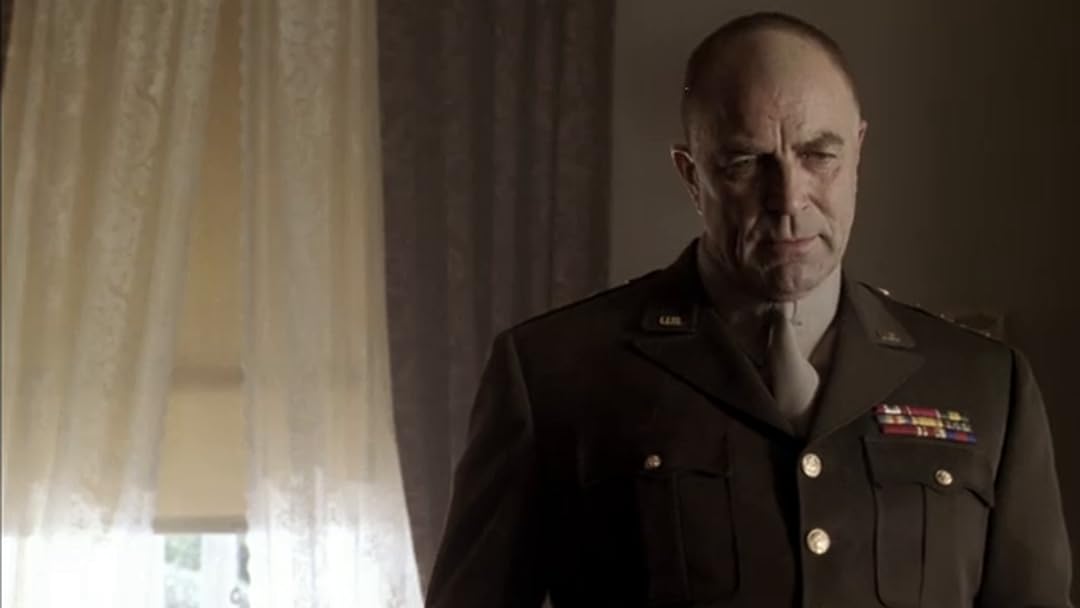 (1,827)
7.11 h 28 min2004PG
The D-Day invasion - the largest military operation of World War II and the beginning of the end - marked Dwight Ike Eisenhower as one of America's most powerful military leaders. IKE: COUNTDOWN TOD-DAY follows the 90 terrifying days leading up to the invasion as Eisenhower decides the fates of thousands.

DMore1Reviewed in the United States on November 14, 2019
4.0 out of 5 stars
The film lacks some historical accuracy, especially in terms of relationships--still worth watching.
Verified purchase
An excellent docudrama portraying the perils and challenges of leadership and command at echelons above corps. This is the only film portraying "certain aspects" of the Supreme Allied Commander for the invasion of the European theatre of war, in WWII. And, for the most part, it is interesting, very well acted, well written, and carefully directed; with the exception of one issue; the relationship and exchange between LTG George Patton, and GEN Eisenhower.

Despite Patton's obvious personality flaws, he was considered by all above him as one of America's premier fighting generals. Others were great planners, but lacked on the battlefield, while others were good commanders in battle but lacked the ability to plan--Patton was an exception. He was exceptional, and was by far head and shoulders above even Eisenhower, who was not necessarily the best staff officer, and, he had never commanded in combat, until now.

Therefore, the way the writer and director portray the relationship between the two generals is ridiculous. Patton was nobody's fool. He didn't hug Ike, and I doubt seriously he ever dropped his helmet while doing so. I've read just about everything ever written about Patton, and he was not a guy who would ever have told his E5 driver that he had Eisenhower eating out of his hands. The entire exchange is preposterous and greatly cheapens the film.

Yes, Patton got his butt chewed for slapping a soldier he accused of malingering, and yes, it did cost him a command, because you cannot put your hands on a soldier, no matter what, not even in wartime.

So, watch the movie, it is a great film, but lacks some degree of accuracy in terms of its historical fact. If you gat work past that, you will enjoy it.

P. M. Culpepper Jr.Reviewed in the United States on May 5, 2016
5.0 out of 5 stars
Outstanding.
Verified purchase
Many Americans are far removed in time from the events leading up to the Normandy Invasion of France which started the end of Hitler's stranglehold on Europe. The concept of several countries putting all of their militaries under the command of ONE American General is a difficult one for most of us to imagine, but that's what they did when Eisenhower was made "supreme commander" of the Allied forces. There was great trust in him, his judgment, his fairness and his character. He had to walk a tight rope among commanders of different militaries who were seeking self-glory while trying to win a huge war... The acting in the movie was very good, there is good drama and suspense. There are not a lot of battle scenes because that's really not what this movie is about... It's historical and factual. It's very entertaining. I think a lot of young people would benefit by watching this film of one of the greatest events in the history of warfare.
21 people found this helpful

The casting was outstanding, almost every actor presented their character in the way which many of us who read history pictured them. I include people like DE Gaul, Montgomery, Patton, and the actor playing Churchill nocked it out of the park. Of course I have to include Selleck in this praise, I have always liked his work, but I think I would list this as his best work to date.

Two thumbs up for a movie which showed the true responsibility faced by a man who for a short period of history was arguably the most powerful man alive and how he used that power and how it weighed on him.
14 people found this helpful

DougReviewed in the United States on September 24, 2017
5.0 out of 5 stars
I've watched this multiple times and decided to buy it!
Verified purchase
One of my all-time favorite docu-dramas. In fact, this might be my favorite. I have read quite a bit about WWII, Ike and D-Day. While I am sure there are some historical inaccuracies, this production gives you an excellent feel for the incredible weight that was put upon Ike leading up to the decision to go or not go in June of 1944. Those who love Patton will not be pleased...however, it is easy to say that Patton could not have pulled this off.
10 people found this helpful

SLSReviewed in the United States on March 17, 2021
5.0 out of 5 stars
No glory in war
Verified purchase
Wonderful movie. Not really about D-day. Really about leadership and its burdens. Mr. Selleck is not an obvious pick for General Eisenhower. But, a few minutes into the movie, he became General Eisenhower.

Although many of the details are history, don’t look for historical accuracy. In a way this film is the anti-Iliad, as General Eisenhower makes clear in his letter to his wife. He says something like this: There is no glory in war.
One person found this helpful

Walt9Reviewed in the United States on June 9, 2021
5.0 out of 5 stars
Great Portrait of a Leader at a Momentous Time
Verified purchase
A well-done docudrama about a leader who had to steer strong differing personalities (Churchill, Montgomery, Spaatz, Harris, Patton, Leigh-Mallory, DeGaulle, Bradley) with their own views of how the WWII invasion of Europe should proceed, towards the singular D-Day mission with which several disagreed.

Ike Eisenhower had both wisdom and a strength of character that few leaders have today. Ready to take sole blame if D-Day failed, Selleck does a terrific job portraying Ike as the Supreme Commander over other generals, several who thought they should have his job, and whose military skills were only exceeded by their pomposity. He understood that for the D-Day venture to work, that while he was clearly in command, he would have to let his field generals get the newspaper ink, while he owned the behind-the-scenes pressure of making consequential decisions affecting millions of lives, putting personal friendship and goals aside for the sake of the mission.

The entire cast is excellent, with a script that brings out the tension of Ike’s situation and his unique qualities for successfully handling it. Ike was one of those singular leaders who could not have been replaced by anyone but General Marshall, who FDR needed in Washington to keep things militarily in place there.

RandyReviewed in the United States on May 25, 2016
5.0 out of 5 stars
Well portrayed story
Verified purchase
I had missed this way back when it was first broadcast, but a recent revival of interest in WWII history caused me to seek this out. Though a big Tom Selleck fan (love him in Blue Bloods), I admit initially thinking it was a reach to portray Eisenhower, but he is really good in this role. He well portrayed the tremendous burden of responsibility in making the decision "Let's go" for June 6, 1944, a date that marked the beginning of the end of World War II. I really thought this was a moving documentary. It does not attempt to re-create the horrors of D-Day, but as the title suggests, it concentrates on the decision making process, the personalities and opinions Ike had to consider and manage, and the ultimate burden he shouldered in commiting to the cross channel invasion.
7 people found this helpful

LauraReviewed in the United States on April 8, 2021
5.0 out of 5 stars
Sellecks best performance period!
Verified purchase
Excellent movie! If you enjoy WWII History you will absolutely love this movie! There are a plethora of movies about D-Day, but this one is different! I thought I knew a lot about the planning of D-Day, but after watching this movie I realized I really didn’t know much at all! Tom Selleck in my opinion gave the performance of his career!
Again if you enjoy History, this movie is a must see!
One person found this helpful
See all reviews
Back to top
Get to Know Us
Make Money with Us
Amazon Payment Products
Let Us Help You
EnglishChoose a language for shopping. United StatesChoose a country/region for shopping.
© 1996-2022, Amazon.com, Inc. or its affiliates