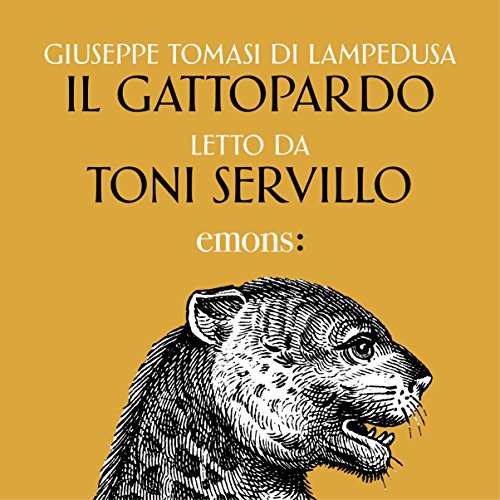 Special invitation from Audible!
Learn more about Membership
List Price: $12.64
You Save: $1.58 (13%)
By completing your purchase, you agree to Audible’s Conditions Of Use
Sold and delivered by Audible, an Amazon company
Share

4.6 out of 5 stars
4.6 out of 5
949 global ratings
How are ratings calculated?
To calculate the overall star rating and percentage breakdown by star, we don’t use a simple average. Instead, our system considers things like how recent a review is and if the reviewer bought the item on Amazon. It also analyzes reviews to verify trustworthiness.
Top reviews

loves lit
5.0 out of 5 stars One of Italy’s greatest novels
Reviewed in the United States on October 11, 2020
Verified Purchase
The story of an aristocrat who is losing the life he is accustomed to —and cherishes, but is willing to let go—to the Italian Risorgimento is a compelling one. The author never wrote another novel, and he died before this one, a masterpiece, found a publisher. It is one of Italy’s greatest novels, written with a command of Italian that is unsurpassed but not easy to read if you’re attempting it in Italian and aren’t a native speaker. The translation into English by Archibald Colquhoun is excellent. This is a lush, gorgeously-written account of life in southern Italy, set in 1860, but written in the 1950’s.
Read more
One person found this helpful
Helpful
Report abuse

Gio
5.0 out of 5 stars "The Leopard" is a 20th C Book!
Reviewed in the United States on November 24, 2011
Verified Purchase
Published first in 1957, the year of Giuseppe di Lampedusa's death! That was only six years before the acclaimed film by Luchino Visconti was released. But Il Gattopardo is ineluctably a 20th C novel masquerading as a 19th C Romance, in style as much as in setting. I insist on telling you this because, if you didn't read the preface or look at the back of the title page, you might well be dangerously startled when Lampedusa first breaks the frame and refers to events of his own lifetime. That doesn't happen until a third of the book is finished; until then there is no 'narrator' in sight. Thereafter, however, Lampedusa inserts his "I" at judicious intervals, calling the reader away from the Sicily of the 1860s with metaphors of modernity. Eventually he even mentions the atomic bomb.

Possibly some readers will be annoyed by Lampedusa's occasional first-person anachronism, but I don't think they were an accident or an error of style. They're a significant clue as to the intention of the novel, which isn't simple nostalgia. Lampedusa doesn't whitewash his setting or his characters; Sicily in the 1860s was a land of grievous poverty and economic stagnation, a society still bogged in feudalism, and the aristocratic families that supply nearly all the characters in Il Gattopardo were decadent, besotted with themselves and their possessions, reactionary, indifferent to the misery of their society. Their highest aspiration was to hang on to their luxury and privilege as long as they could, at least their own lifetimes, and let the next generation fend for itself. Only the central figure, Prince Fabrizio Salina, gets much respect from his 'creator' Lampedusa. His flaws and follies are the same as any other of his class, but his vitality and his inward perceptions of his milieu exalt him above the stagnant morass of his insular society. It's not mere words, on Lampedusa's part, to depict the Prince's fascination with astronomy. Salina is, for this author who might be his great-grandson, as genuine a hero as historical reality allows.

The plot of Il Gattopardo is rather loose. It's the era of the Risorgimento, the unification of Italy with Garibaldi as the charismatic revolutionary. Prince Salina imagines himself, correctly as it turns out, as "above the fray". His preeminence will remain untouchable and his Sicily, with all its failures and inequities, will remain eternally the same. His wealth is being eroded by energetic and unscrupulous lower-class parvenus, but he disdains to resist them; such has always been the case, a process of revitalization. The Prince's nephew, a charming and talented fellow whom we see only as the Prince sees him, is an enthusiastic Garibaldino and an avatar of the Sicily-to-be, but his uncle's affection for him is stronger than any political discord. Eventually a love story unfolds, between the nephew and the beautiful daughter of the Prince's polar opposite, the up-and-coming parvenu "Don" Calogero. That romance is in effect the structure of the novel, but the heart and soul of Lampedusa's tale is the complex depiction of the personhood of Fabrizio Salina.

If it's not nostalgia, then what is it? I think it's a celebration of "tempo perso" -- temps perdus/lost times -- a monument of their beauty as well as their infamy, intended to rescue them from oblivion. In that mode, it reminds me of the extraordinary Squarcialupi Codex of 15th Century Florence, an opulent illuminated volume containing the best music of Tuscany's distinctive indigenous composers, whose style was already utterly out of fashion, displaced by the arrival of the Franco-Flemish polyphonists in Italy. The redactors of the Squarcialupi Codex had no expectation of reviving the music of their greatest native composers like Francesco Landini, nor even to encourage performance of it. They meant forthrightly to immortalize the accomplishment by wrapping it sumptuously in museum shrouds. Il Gattopardo strikes me as having the same intention, not to replay the 'music' of pre-modern Sicily but actually to inscribe it in the museum of literature before its image faded from human memory.
Read more
12 people found this helpful
Helpful
Report abuse

Airfrere
4.0 out of 5 stars Downton Abbey, Sicilian style
Reviewed in the United States on March 18, 2019
Verified Purchase
A cleverly-written look into the life of a Sicilian noble family just before and after Garibaldi's defeat of the Papal States and the unification of Italy. The Italian is beautiful, yet dense, requiring me to stop periodically to look up the meaning of a word. This detracted somewhat from the reading experience, but in the end it was still a worthwhile read.
Read more
3 people found this helpful
Helpful
Report abuse

Joseph
5.0 out of 5 stars Great book
Reviewed in the United States on October 15, 2013
Verified Purchase
The availability of this important piece of Italian literature in its native language is a significant event, bringing this classic to readers outside of Italy for their enjoyment and appreciation without the intermediary translation. Adding to the excitement of having this novel in electronic format is the informative and insightful preface written by his nephew and adopted son which details the history of the writing and publication of this classic, including editing of the first editions. This version presented in e-format is a welcome addition to the library of literature available to readers who wish to experience it in this format and a superb classic for readers of the Italian language everywhere
Read more
2 people found this helpful
Helpful
Report abuse

Conchscooter
5.0 out of 5 stars The Leopard's Last Roar
Reviewed in the United States on September 1, 2015
Verified Purchase
A classic of Italian Literature. I read it in school, I lived it in my youth in my family's crumbling Italian estate. It is a book that expects a certain amount of knowledge from the reader and if 19th century Italian politics of the Risorgimento are unknown to you much of the plot will be baffling. The book also chronicles the passage of time,, change and decay, universal themes made melodramatic in 19th century Sicily. I love this book, de Lampedusa's only novel and thus a homage to his family and his Sicilian world, gorgeously evoked.
Read more
3 people found this helpful
Helpful
Report abuse

El Viejo Topo
5.0 out of 5 stars Worth learning Italian to read
Reviewed in the United States on October 15, 2011
Verified Purchase
...and it won't be easy. But this is magnificent prose and a lapidary account of the end of the ancien regime in Italy. Better to read Lampedusa than a boatload of so-called professional historians who write for each other with all the style of processed cheese. I keep coming back to Lampedusa to understand the nineteenth century--one of the best in ANY language.
Read more
6 people found this helpful
Helpful
Report abuse

Amazon Customer
5.0 out of 5 stars Wonderful Read
Reviewed in the United States on July 20, 2021
Verified Purchase
The author’s descriptions are incredible. His imagery is exceptional and a great study for those who wish to improve their writing skills.

Richard R.
5.0 out of 5 stars with brilliant descriptions and characterizations
Reviewed in the United States on May 26, 2018
Verified Purchase
A masterpiece of Italian prose, with brilliant descriptions and
characterizations. However, for those not completely versed in Italian,
have a good Italian-English dictionary nearby.
Read more
2 people found this helpful
Helpful
Report abuse
See all reviews

Dmitrij Rubcov
5.0 out of 5 stars Good present for anyone learning Italian
Reviewed in the United Kingdom on June 15, 2021
Verified Purchase
One of Italian classics, bought it for my mom who learns Italian.
Read more
One person found this helpful
Report abuse

Orlando Innamorato
5.0 out of 5 stars Unknown Sicily
Reviewed in the United Kingdom on February 8, 2013
Verified Purchase
This great novel set in 1860 shows the great flaws of pre-unification Italy seen from the point of view of a Sicilian prince and landowner. It depicts the reason's for Sicily's and- by extension- the rest of Southern Italy great historical problems and challenges.
The style is irreverent, ironic, humorous and sarcastic. The main characters, Prince Fabrizio, and his nephew Tancredi epitomize Sicilian society and a decadent landed gentry that desperately cling on the power they have exercised for centuries on the peasantry. The arrival of Garibaldi and the Piedmontese from Northern Italy to liberate Sicily from the tyranny of the king of Naples achieve little or nothing to change the state of affairs. As Tancredi himself says: 'Uncle Fabrizio, for things to change we need that all remain the same.[ my translation from Italian].
Incredible metaphors, far-fetched and yet very focused analogies- everything in Tommasi di Lampedusa is a fantastic oxymoron- and a pungent and tongue-in-cheek humour come together to give us the pleasure of an extremely enjoyable reading.
I can find little flaws or dislikes in this novel apart from a lack of point of views from the peasantry but, after all, Jane Austin herself wrote little or nothing from the perspective of the lower strata of society and yet managed to subtly say so much about 18-19th Centuries England society in general.
I do not know how good can be the English translation as I have read this book in Italian. I sincerely hope it can retain as much richness of language as its Italian original version.
Read more
8 people found this helpful
Report abuse

Dr. C. J. Sealey
5.0 out of 5 stars Aging Prince finds it hard to cope - with everything
Reviewed in the United Kingdom on January 15, 2014
Verified Purchase
Poor old Prince Fabrizio; as if its not bad enough that the aristocratic order is threatened by the unification of Italy, that his Sicilian estates are in hock or in the hands of an unscrupulous, low-class hard case, it turns out his beloved nephew wants to marry this scumbag's daughter - and does. All the while the Prince struggles with the onset of old age and the erosion of his physical and aristocratic powers.
This wonderful book, and Visconti's film, which more or less faithfully depicts it, makes Sicily the harsh, sun-scorched setting. If you have never been there you will want to; and when you do you will be delighted.
Read more
2 people found this helpful
Report abuse