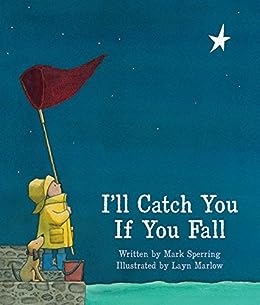 I'll Catch You If You Fall Kindle Edition

by Mark Sperring (Author), Layn Marlow (Illustrator) Format: Kindle Edition
See all formats and editions
Sorry, there was a problem loading this page. Try again.
In the spirit of Someday and Guess How Much I Love You comes a lyrical and endearing picture book about the people in our lives who are always there to look out for us.

Who will keep the boy safe?
“I will,” said his mother. “I will hold him close...
and never let him lean too far.”

Big or small, near or far, we all need someone to watch over us. This touching picture book is a reassuring tale about a journey and the people who are with us as we travel through life. It is for anyone who has wondered, Who will keep me safe? and for anyone who has answered, I will.
Read more
Previous page
Next page
Fire Tablets
Fire Phones
Free Kindle Reading Apps
Available on these devices

This nautical-themed British import reassures children everywhere that there is always someone watching over them. This picturesque book starts by asking, “Who will keep the boy safe?” as a young boy in a yellow raincoat reaches perilously over the edge of a boat with a net. “‘I will’, said his mother. ‘I will hold him close…and never let him lean too far.’” The text then goes on to ask who will keep both of them safe, along with the boat and then a star. The true standouts in this book are the bright watercolor and digital illustrations. The impressive storm seascapes in particular will mesmerize both children and adults. This picture book could be used in a sea-themed storytime, as well as a storytime about feelings. The book’s theme and tone are also broad enough that caregivers could adapt it to their own anxious children’s concerns. VERDICT- A general purchase for most libraries.–BrookeNewberry, La Crosse Public Library, WI (School Library Journal January 1, 2016)

A little boy on aperilous adventure at sea needs someone to see him safely home. The firstdouble-page spread introduces a little boy in a yellow slicker and sou'wester,leaning precariously from a boat and dragging a net through the water. Thecharming, digitally rendered illustrations feature a lighthouse in the distanceand a welcoming harbor with a dog keeping watch on the water. Large black textundulates like a wave across the page, asking: "Who will keep the boysafe?" With a turn of the page, his mother answers: "I will….I willhold him close…and never let him lean too far." But who will keep themboth safe? The boat's captain will. And who will keep the boat safe? A starwill guide it through a storm and safely back to harbor. Finally, the questionscome to rest in a way that gently empowers the boy at the heart of the storyand recalls its opening scene. Who will keep the star safe? "I will,"says the little boy, now holding his red net out his window: "I will leanout my window, but not too far… / and catch you if you fall." Marlow'sillustrations reveal a quaint, North Atlantic coastal setting; all charactersare white, and both the boat's captain and the little boy (under his slicker)sport cozy fisherman-knit sweaters. This sentimental story of a return voyagecarries an important message—let's all take care of one another. (Picture book.2-5) (Kirkus Reviews December 15, 2015)

In this reassuring picture book, a child in a boat asks who will watch over him. His mother prevents him from leaning too far overboard, but then the child wonders who will keep them both safe. “I will steer the boat and keep a watch,” asserts the captain. The child then kicks the question up another notch: Who will keep the entire ship safe? A star in the night sky promises to guide the boat back home to safe harbor, but “Who will keep me safe?” The boy promises to catch the star should it take a tumble. Brief sentences in an oversized font stand out against detailed illustrations, and the main characters are featured in bright, attention-getting primary colors. There’s no anxiety or mounting sense of doom, so this is suitable for even the youngest audiences. The action takes place at night, and the muted, dreamy background colors are reminiscent of a bedtime story, but this comforting message will be welcome in any setting at any time. — Kathleen McBroom (Booklist February 1, 2015)

Mark Sperring is the author of The Sunflower Sword, Captain Buckleboots on the Naughty Step, and Green. He is a bookseller with a huge wealth of knowledge of the children’s market. Mark lives in Bristol, England.

Layn Marlow grew up in Essex, England. After studying history of art at Reading University, Layn began her career working for the library service. She lived in Belgium for several years but it was on her return to the UK that she enrolled as a mature student at Southampton University and received a first class degree in illustration.

Camsmom
4.0 out of 5 stars Reading is important
Reviewed in the United States on July 21, 2021
Verified Purchase
The story was ok. I bought it as a gift but had never read it before. It’s not my favorite story but it’s ok, not horrible but it didn’t make me feel all warm and fuzzy either.
Read more
Helpful
Report abuse

K A.
5.0 out of 5 stars A Delight.
Reviewed in the United States on December 1, 2018
Verified Purchase
What a wonderful, uplifting book! Offers reassurance and comfort. Lovely.
Read more
One person found this helpful
Helpful
Report abuse

Beach Lover
5.0 out of 5 stars Great Book
Reviewed in the United States on April 20, 2016
Verified Purchase
Wonderful book bought for our grandchildren. They love it!
Read more
One person found this helpful
Helpful
Report abuse

Katie
5.0 out of 5 stars This is a great book!
Reviewed in the United States on November 13, 2018
Verified Purchase
This is such a wonderful book! I love the storyline and the ending is my favorite!
Read more
One person found this helpful
Helpful
Report abuse

Margaret Francis
5.0 out of 5 stars Five Stars
Reviewed in the United States on March 16, 2017
Verified Purchase
This was a book I bought for my great granddaughter she dearly loves the book
Read more
One person found this helpful
Helpful
Report abuse