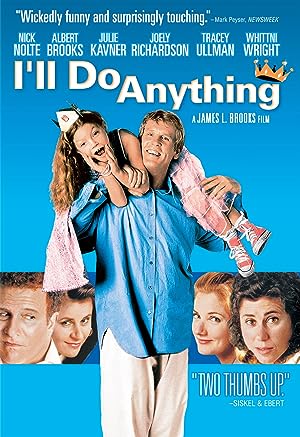 (113)
5.61 h 56 min1994PG-13
In this charming romantic comedy, Nick Nolte stars as Matt Hobbs, a character actor who struggles to make ends meet when his ex-wife (Tracey Ullman) unexpectedly makes him responsible for their six-year-old daughter.

Big MommaReviewed in the United States on September 2, 2020
5.0 out of 5 stars
Holds up well
Verified purchase
I've watched this movie for years, and it never gets better, it never gets old, it remains an oldie but a 'goodie.' Nick Nolte is the basic good guy, just as Mr. Deeds was a basic good guy. His patience with his bratty little daughter makes you love him. Nothing makes you love the daughter, but at least you can hear echoes of her mother's opinions and effects of that upbringing - so, you give her a break. Anyone can grow out of that.

Albert Brooks is not the basic good guy. He's the opposite: the basic bad guy. Shallow, narcissistic, selfish, arrogant, with little room for improvement in that space harboring his huge overblown ego. Yet, watching him is entertaining. Toxic behavior amuses. You can be mesmerized by his grand show of insecurity, dislike him, and still laugh. You don't like him any better, but you had a laugh - at his expense. This is one of the things his girlfriend appreciates about him, and it makes her sad. Can he grow to be a real person, who is capable of feelings and listening? Possibly. It may take years and years and years!

The little girl who is the center of all the drama - and comedy - is a very good actor. I'm impressed that so many kids are giving great performances on the big screen now. Julia Butters in 'Once Upon a Time in Hollywood' is incredible, although she is older than the child in this movie, so no comparison is possible. It could be that writers are writing better parts for children, and the children are simply succeeding in those parts.

Movie Addict17Reviewed in the United States on March 16, 2021
4.0 out of 5 stars
Underrated film with a very sweet Nick Nolte
Verified purchase
However, the star of the movie for me is Julie Kavner (also underrated as an actor).
The story follows a struggling, but talented actor whose ex-wife calls on him to take care of their 5 year old daughter, played by a stunningly talented Whittni Wright, who is a handful. Albert Brooks plays a movie producer with his typical angst but it's funny and sweet. James L. Brooks writes clever dialogue and this movie is no exception.
(Julie Kavner has the lion's share of them) Unfortunately, it didn't do well at the box office due to bad timing.
Give it a try if you liked Broadcast News. It's a great chance to see another side of Nick Nolte, which was refreshing. Overall, it's a sweet movie that you will find yourself quoting.

NycpapitoReviewed in the United States on January 29, 2021
4.0 out of 5 stars
I want my yellow dress!
Verified purchase
Underrated Albert Brooks film. This was supposed to be a musical and I wonder how it would have been if they kept the original edit. Julie Kavner and Tracey Ullmann are standouts

gloria morenoReviewed in the United States on May 27, 2021
5.0 out of 5 stars
Family movie.
Verified purchase
Entertaining for the family!

BrittyReviewed in the United States on December 30, 2018
3.0 out of 5 stars
Meehh
Verified purchase
Acting is cheesy and overdramatic

Diana Snell-BlasingameReviewed in the United States on March 6, 2019
5.0 out of 5 stars
Love it
Verified purchase
Love it
See all reviews
Back to top
Get to Know Us
Make Money with Us
Amazon Payment Products
Let Us Help You
EnglishChoose a language for shopping. United StatesChoose a country/region for shopping.
© 1996-2022, Amazon.com, Inc. or its affiliates