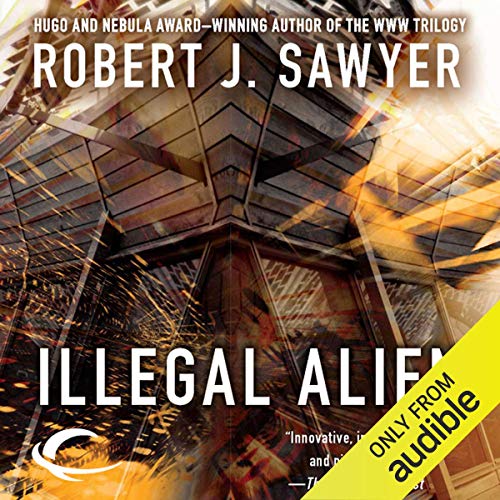 When a disabled spaceship enters Earth's atmosphere, seven members of the advanced Tosok race are welcomed by the world. Then a popular scientist is murdered, and all evidence points to one of the Tosoks. Now, an alien is tried in a court of law -and there may be far more at stake than accounting for one human life.

Your audiobook is waiting!
Learn more about membership
List Price: $19.95
You Save: $4.96 (25%)
By completing your purchase, you agree to Audible’s Conditions Of Use
Sold and delivered by Audible, an Amazon company

Amazon Customer
4.0 out of 5 stars Illegal Alien
Reviewed in the United States on July 29, 2012
Verified Purchase
Originally published in 1997, Robert J. Sawyer`s novel Illegal Alien tells the tale of Earth's first contact with an alien species. Inspired (at least in part) by the O.J. Simpson trial, Sawyer weaves a story of intrigue, while layering in courtroom drama in a book that bucks the typical science-fiction expectations, and keeps readers engaged until the very last word.

It's hard to find anything initially wrong with Sawyer's work in Illegal Alien. Indeed, it immediately grabs the reader, and is a page-turner in every conceivable way. Though not exactly what one would expect, based on the synopsis, the courtroom scenes are well written, and show a deep and accurate knowledge of legal proceedings. Though preceding it by several years, Illegal Alien is in many ways similar to Sawyer's Mindscan, in style, if not in substance; that novel, too, revolved deeply around courtroom proceedings.

The characters introduced in the novel are both memorable, and intriguing. The Tosok race in particular is an interesting species, though Sawyer reveals precious little about their culture, beyond a few sentences that fill in a bit. It's hard to imagine any alien encounter that doesn't involve countless hours of question-and-answer sessions with everything from scientists, to mathematicians, to theologists. Not just the aliens are memorable, however, as the human characters are as well. In particular, Clete Calhoun, the celebrity scientist seems to jump off the page, and endear himself with readers. Each of the Tosok characters are presented fairly uniquely, and therefore lend further credence to the world-building that Sawyer has done in the novel.

Though the story intially begins with the introduction of the Tosok's, and the events surrounding their appearance on Earth, the story quickly-and dramatically-takes a turn. A human is murdered, and all clues implicate a Tosok. From here out, the story revolves almost exclusively around the courtroom and legal procedures that take place in the prosecution of the alien. It's interesting to see how humanity deals with the implications the trial will have both on the current, and future relations that Humans and Tosoks will have with each other. Unfortunately, because the novel takes so much time delving into the justice procedures, it does tend to drag a bit from time to time-not in a way that will prevent users from continuing to read, but in the way that seems to avoid the subjects that readers may be most interested in; just when the conversation starts going down a road that will actually reveal some interesting details about the Tosok race, an objection, or cut-off answer leaves the reader hanging. Also frustrating is the lack of exploration of the knowledge about the local stellar neighborhood that the Tosoks may be able to provide.

Illegal Alien is an interesting story of first-contact, and depicts a believable, intrinsically different species, obviously evolved from different life-forms. In many ways, it's exactly what one would expect of a first-contact scenario. This book's page-turning pace, and fascinating subject matter will keep readers well-entertained.
Read more
3 people found this helpful
Helpful
Report abuse

Critic's Corner
4.0 out of 5 stars First Contact Takes Back Seat to American Justice System!
Reviewed in the United States on December 31, 2012
Verified Purchase
I really liked "Illegal Alien." It was written at the time of the O.J. Simpson murder trial and Sawyer cannot resist mentioning it throughout the book. This is fine, as it allows the author some flexibility of plot and pacing: an old lawyer who has won his share of cases, Mr. Dale Rice, a black man who knew Martin Luther King, Jr. and at 70+ years young gets the chance of a century - to defend an alien accused of the murder of Calhoun, a PBS news/astronomer who was the first to step aboard an alien vessel, make friends with the creatures and introduce tehm to society.

Plots: It is interesting how Sawyer uses the alien as a complete zero in looking at the American justice system. The author admits (on other forums) to have thoroughly researched our system of justice and in many ways it does come up wanting. The shifting of gears between defense and prosecution, the calling up of witnesses, jury selection, and so on is interesting.

Themes: Racism plays some part; also reliability, trust, deception and a stick-to it tiveness runs the gamet of the novel.

The only thing I did not like about the novel was its apparent criticism of those who love UFOs, Star Trek and other geek elements. Minor point.

Bottom Line: Creative, a bit dated, and fascinating look from a Canadian (alien?) perspective of our sometimes wild and crazy justice system. Recommended for lovers to To Kill a Mockingbird and whoever sat through the entire broadcast of the O.J. Simpson trials.
Read more
One person found this helpful
Helpful
Report abuse

David Dennis
4.0 out of 5 stars Interplanetary Law & Order
Reviewed in the United States on April 21, 2013
Verified Purchase
Somehow I had never heard of Robert J. Sawyer until I came across this book. Illegal Alien is a stunning, engrossing sci-fi thriller like nothing else ever. Set in the late 1990's (when it was actually written), an extraterrestrial craft lands in the middle of the Atlantic, and both the USA and the Russians send ships to the scene. First Contact is made in a surprisingly mature and civilized fashion, quite unlike the usual conflict and disaster found in most first contact novels. The Tosok are from Alpha Centauri and are on a mission of peaceful exploration. All goes well until one of the human contact team is found dead, in a fashion which strongly implicates one of the Tosok as the killer, who is then arrested and put on trial for first degree murder. The interplanetary implications therein are obvious.
Sawyer draws well-defined characters, including several of the Tosok, to whom the reader can easily relate. On the surface, most of the book centers around the trial and preparation thereof, but it is far from dry, as any regular viewer of Law & Order can testify, with the added dimension of discovering an entire alien culture in a most unusual context. The Tosok race and its very different culture is developed in a fascinating and believable fashion, even after the point where we discover that nothing about them is as it seems. I read this entire book in one day, a day in which I had many other things I should have been doing. Totally satisfying read.
Read more
Helpful
Report abuse

Skip Stein
4.0 out of 5 stars Another Great Read
Reviewed in the United States on July 28, 2012
Verified Purchase
I am a huge fan of Sawyer. I just discovered him earlier this year and have read almost all of his work to date. Amazing that I didn't know of him before as I am an avid science fiction reader.

This, like his other stories, pose intriguing looks at US humans from a 'foreign' viewpoint. The questions raised and solutions proposed are always intriguing, interesting and mentally challenging.

No spoilers from me. I think reading any of Sawyer's works is uplifting and rewarding. I love that he writes of positive viewpoints; unlike so many of the 'darker' authors.

Now that I am running out of his past works to read, I am avidly awaiting all his future works!
Read more
2 people found this helpful
Helpful
Report abuse
See all reviews

Mr. Leonard F. Clark
3.0 out of 5 stars Not his best but enjoyable
Reviewed in the United Kingdom on July 7, 2013
Verified Purchase
You expect a good read from Sawyer, and this won't disappoint - but not one of his best - and a bit predictable in parts.
Read more
Report abuse

The Cognologist
2.0 out of 5 stars Silly
Reviewed in the United Kingdom on September 14, 2013
Verified Purchase
I really thought this was a silly story, drawn out and over long. How come this writer wins so many awards?
Read more
One person found this helpful
Report abuse