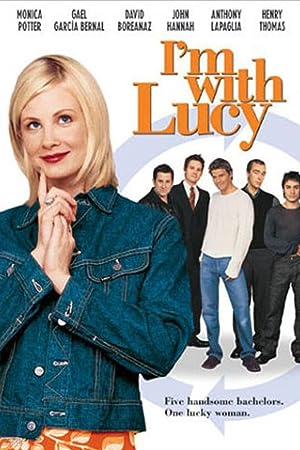 (113)
5.91 h 30 min2003R
"I'm With Lucy", with Monica Potter (Lucy) as an available NYC single who's dating five guys, goes round and round showing Potter in select situations with each of her suitors until - she finally picks one...

OligonicellaReviewed in the United States on September 5, 2021
3.0 out of 5 stars
Not really funny.
Verified purchase
Banal and weak writing. The main character was a pretty unlikable woman and that made it difficult to care about her angst about not having someone. I guess the acting was OK if that was the point.

The montage effect didn't help in any way, showing her being rude and dismissive to man after man. No idea if she "grew" by the end because I was constantly thinking that I'd bail on those dates after being treated like that.

By the time I bailed I was sort of hoping she'd die an old maid.

KindleReviewed in the United States on September 25, 2021
4.0 out of 5 stars
Turns out to be a great romantic film; you might want to stick with it.
Verified purchase
I enjoyed this from the beginning but it felt a bit less cohesive/strong starting off. It steadily got better which is unusual in a film and had a nice ending. Overall a really good romantic movie. Not really a comedy per say; some moments that are a bit funny but more of a straight romance film than romantic comedy. Engaging and very enjoyable with a variety of characters and a nice, bright side of New York vibe.

Shandra ShawReviewed in the United States on October 19, 2010
5.0 out of 5 stars
I'm With Lucy DVD
Verified purchase
It takes a few scenes to get into I'm with Lucy, with its broad sense of humor meshed with a quieter, more introspective view on dating, but once things gel a bit, it almost never misses a beat. It's the second film by independent filmmaker Jon Sherman (Breathing Room), working with first-time screenwriter Eric Pomerance's script, but it feels like the work of more seasoned veterans, with a good balance of storytelling and character development that pays off quite well during the film's more romantic moments. Above and beyond all else, it's really the cast that shines in this one, with solid casting in each respective role, and, of course, Potter sparkles in her first starring role, hopefully the first of many.

So the next time you're in the video store and in the mood for a romantic comedy, take a look for I'm with Lucy, for a colorful and somewhat touching formula flick that will remind you of some of the best of Julia, and not just because of Potter. A very pleasant surprise on all counts.
One person found this helpful

Amanda L.Reviewed in the United States on October 29, 2021
3.0 out of 5 stars
Interesting characters, but a few too many of them
Verified purchase
I liked the premise of the movie: discovering which of the 5 blind dates Lucy had chosen to eventually marry. I also liked how many of them had a bad start which made "Mr. Right" harder to decipher. However, I think there wasn't enough time to devote to each man, and some of the date endings were vague without any closure. I think either the movie should have been longer or the scenes should have included a bit more. Cute movie though, and the characters were all interesting. I enjoyed it overall.
One person found this helpful

Baba GanushReviewed in the United States on October 4, 2021
4.0 out of 5 stars
it was true to its core
Verified purchase
A romantic adventure about a woman finding her way to real love.
Gotta kiss a lot of frogs and she did.
I'm a sucker for a good love story and I really liked this one.
The pay off was fabulous.
One person found this helpful

JOReviewed in the United States on September 19, 2021
5.0 out of 5 stars
An All Time Favorite
Verified purchase
Wonderful to see this movie again. It is one of my all time favorites. Lucy will be marrying one of her blind dates, but which one?? Flashing back to her past dates to see who she will fall in love with and marry. Fantastic cast

avid film-makerReviewed in the United States on October 29, 2021
1.0 out of 5 stars
Not funny, slow, tedious,
Verified purchase
The lead seems a bit too intense which takes away from the romance and cadence.
Love Gael Garcia Bernal, though!

romcomfanReviewed in the United States on June 21, 2004
4.0 out of 5 stars
Very Romantic
Verified purchase
I watched this video last night while my husband was out and it made me miss him so much. The story just made me feel all mushy and romantic as I watched Lucy go from guy to guy, wondering who she would pick in the end. Most of her suitors were incredibly sweet and good to her. One guy turned out to be a real abusive jerk in the end. I really had no idea who she would choose until close to the end, when it became pretty obvious who the "winner" would be. I wasn't dissapointed because he was really cute and nice to her, although she did have good chemistry with some of the others too. The funniest scenes were with her parents. Oh, and I have to mention how uncanny the resemblance is between Monica Potter and Julia Roberts. It is just too weird. If you are a romantic you will definitely enjoy this movie.
4 people found this helpful
See all reviews
Back to top
Get to Know Us
Make Money with Us
Amazon Payment Products
Let Us Help You
EnglishChoose a language for shopping. United StatesChoose a country/region for shopping.
© 1996-2021, Amazon.com, Inc. or its affiliates