I'm a Pretty Princess and millions of other books are available for Amazon Kindle. Learn more 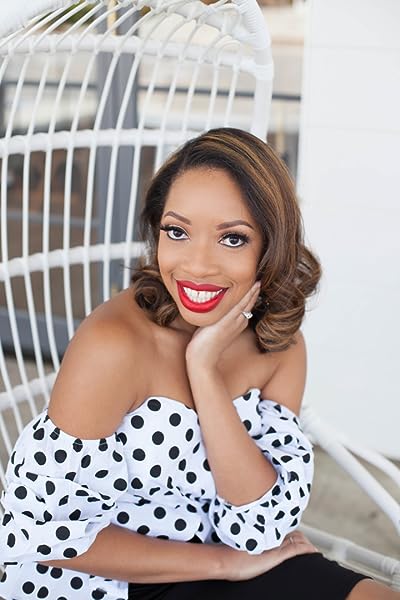 by Crystal Swain-Bates (Author)
4.9 out of 5 stars 1,563 ratings
See all formats and editions
Sorry, there was a problem loading this page. Try again.

Meet Makayla, a pretty black princess who lives in a castle far, far away. Although she has cute dresses, a sparkling tiara, and a shiny wand, she knows that being a princess isn't just about her fancy things, she has to put in work to be the very best princess she can be! By the end of this rhyming picture book, Makayla realizes that "It’s not my castle, my wand, or the dress that I’m in. What makes me a princess is what lies within!"

Start reading I'm a Pretty Princess on your Kindle in under a minute.

Crystal’s children’s books have been seen on platforms including CNN and Huffington Post and used as props for hit television shows such as BET’s “Being Mary Jane” and “The Game”.

Named by the Huffington post as one of "21 Children's Books Every Black Kid Should Read" and cited by numerous media outlets, including Essence magazine, as a top book emphasizing natural hair and brown girl beauty, her book "Big Hair, Don't Care is one of Amazon’s most highly reviewed black children’s books on the market.

A native of Atlanta, GA, Crystal holds a Master’s degree in International Affairs from Florida State University and is an avid world traveler.

4.9 out of 5 stars
4.9 out of 5
1,563 global ratings
How are ratings calculated?
To calculate the overall star rating and percentage breakdown by star, we don’t use a simple average. Instead, our system considers things like how recent a review is and if the reviewer bought the item on Amazon. It also analyzes reviews to verify trustworthiness.

children can sense something wrong when you keep bringing up race. The princess has beautiful black rich friends and she has a handsome father and a beautiful mother and a cute baby brother. I love this book!
Read more
41 people found this helpful
Helpful
Report abuse

T Will
3.0 out of 5 stars Princess book that doesn't perpetuate negative stereotypes
Reviewed in the United States on November 27, 2017
Verified Purchase
There aren't many princess books centered around a person of color, and fewer still that aren't overtly sexist. This book bucks the trend and is a healthy way to indulge your child's desire to be a princess without perpetuating negative stereotypes. That said, the story is somewhat weak. I'm glad to have purchased the book, but mostly because there aren't too many alternatives.
Read more
36 people found this helpful
Helpful
Report abuse

Bisola J.
5.0 out of 5 stars Pretty Princess
Reviewed in the United States on February 2, 2019
Verified Purchase
My daughter loves this book. She is 5 and reads like a scholar. She finished this book in 15 minutes. What she absolutely loves about this book is a princess she can relate too and one who looks like her.
Read more

5.0 out of 5 stars Pretty Princess
By Bisola J. on February 2, 2019
My daughter loves this book. She is 5 and reads like a scholar. She finished this book in 15 minutes. What she absolutely loves about this book is a princess she can relate too and one who looks like her.
Images in this review

Tasha
5.0 out of 5 stars Very cute book!
Reviewed in the United States on January 16, 2020
Verified Purchase
This is the only black princess book I was able to find, I plan to read it at my toddler's upcoming princess birthday party and at the end have them all look in the mirror like the book says and "see" themselves as princess :)
Read more
12 people found this helpful
Helpful
Report abuse

Breanna B
5.0 out of 5 stars Beautiful book
Reviewed in the United States on August 29, 2017
Verified Purchase
It's hard finding books that will help with self esteem. I have a niece that is 3 and I got the book for her birthday. Everytime she comes to visit she asks me to read the book. I'm so happy she is in love with the book.
Read more
15 people found this helpful
Helpful
Report abuse

Teresa R
5.0 out of 5 stars African American Girl - Princess
Reviewed in the United States on October 15, 2018
Verified Purchase
This book, I bought for my grand daughter's birthday. She is a Princess and I am gifting a princess theme.
There aren't too many books that have a black child in them so beautifully illustrated as in this book! The pictures, the drawings, the colors are great! I know she will enjoy it!

O.
5.0 out of 5 stars My favorite princess book by far.
Reviewed in the United States on April 16, 2018
Verified Purchase
I love reading this book to my daughter! This is one of my favorite books by Crystal Swain-Bates. I give it as gifts for birthdays and Christmas. I've bought so many copies and will continue to do so. Every little girl (brown girls especially) should have a copy of this book. It's great to see brown girls depicted as pretty and princesses!!! My favorite princess book by far.
Read more
7 people found this helpful
Helpful
Report abuse

Author Vallean Jackson
5.0 out of 5 stars Short & Sweet
Reviewed in the United States on July 28, 2021
Verified Purchase
Very beautiful book! Loved the playful illustrations and the message that it’s not what you have or where you from, but the person within that matter the most. That is perfect message I think for a lot of kids. Just being you means a lot. Not what you have! Great read! Highly recommended!
Read more
Helpful
Report abuse
See all reviews

Amazon Customer
3.0 out of 5 stars Generally good message but poor quality print
Reviewed in the United Kingdom on August 10, 2018
Verified Purchase
At its heart this book reasonably well attempts to say that it's what's inside you that counts, and that what you do and how you behave matter more than the things you have.
The book has nice cartoon-y style pictures, but there is no story as such. I hadn't realised how American the book was and there are US spellings (color) as well as "Mommy" not "Mummy" (I'd have preferred the UK spellings). I didn't particularly like how the child in the book mentions she wears high heels but this is personal choice.
The print and paper quality is very poor especially given the price (I paid £8). It's something like the quality of a children's magazine, with a more substantial cover.
Having said all this, my daughter loved it immediately!
Read more
13 people found this helpful
Report abuse

Queen B
1.0 out of 5 stars Basic book. 1 sentence per page.
Reviewed in the United Kingdom on July 5, 2020
Verified Purchase
This book is basic and simple. Maybe suitable for 3 yr old. Every page is just a 1 line sentence. One sentence per page. Not much effort went into this book. So I’m returning it. The picture are nice though.
Read more

1.0 out of 5 stars Basic book. 1 sentence per page.
Reviewed in the United Kingdom on July 5, 2020
This book is basic and simple. Maybe suitable for 3 yr old. Every page is just a 1 line sentence. One sentence per page. Not much effort went into this book. So I’m returning it. The picture are nice though.
Images in this review

Joss
5.0 out of 5 stars My friend’s daughter loved it
Reviewed in the United Kingdom on May 26, 2019
Verified Purchase
A good book for a black princess to eleva-te her self esteem by seeing images of her in this book. I’m going to keeping buying these kind of books for my children’s for any black child. Thanks for selling books for black children
Read more
2 people found this helpful
Report abuse

Amazon Customer
5.0 out of 5 stars Lovely
Reviewed in the United Kingdom on August 7, 2019
Verified Purchase
Lovely book. Shame you can't walk into a store and buy a book about black princesses but this is a great buy.
Read more
3 people found this helpful
Report abuse

Sandra G
5.0 out of 5 stars Very good
Reviewed in the United Kingdom on March 20, 2017
Verified Purchase
Bought this for a 7 year old and has loved it.

Loved the concept and the book was of good quality and arrived quickly. There was not much to read on the first few pages so my first thought was to send this back as i thought it was too much of an easy read for a 7 year old but the last few pages had paragraphs as opposed to lines .

Read more
4 people found this helpful
Report abuse
See all reviews
Back to top
Get to Know Us
Make Money with Us
Amazon Payment Products
Let Us Help You
EnglishChoose a language for shopping. United StatesChoose a country/region for shopping.
© 1996-2021, Amazon.com, Inc. or its affiliates